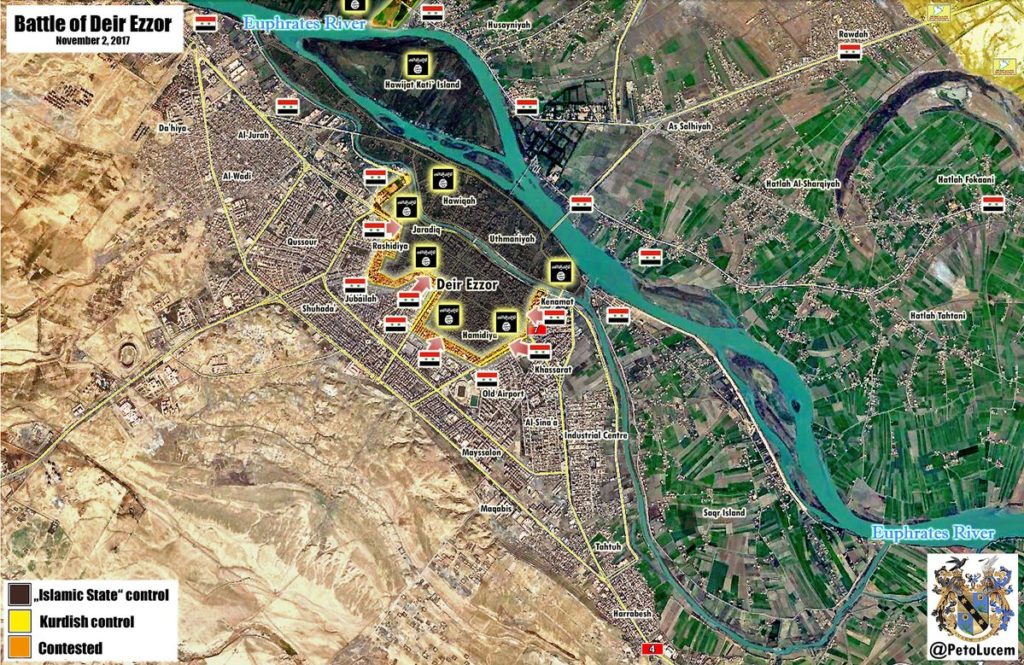 ISIS is about to give up the ghost in the Syrian city of Deir Ezzor. Following the liberation of Jubaliyah neighborhood, the central park area, the workers part area and the school of law and education, the Syrian Arab Army (SAA) Tiger Forces and the Republican Guard advanced further against ISIS terrorists in Hamidiyah neighborhood.

According to pro-government sources, the SAA and its allies overrun the first defense line of ISIS there, but then stuck in an intense fighting with the terrorists. Hamidiyah is the key ISIS defense site in the northern part of Deir Ezzor. If it’s liberated, the ISIS defense will collapse in Rashidiyah and Sheikh Yassin.

Thus, ISIS will be forced to withdraw to Hawiqah and Uthaniyah where the urban area is less dense than in the rest of Deir Ezzor. According to pro-government experts, ISIS will not be able to keep a series defense in these areas. 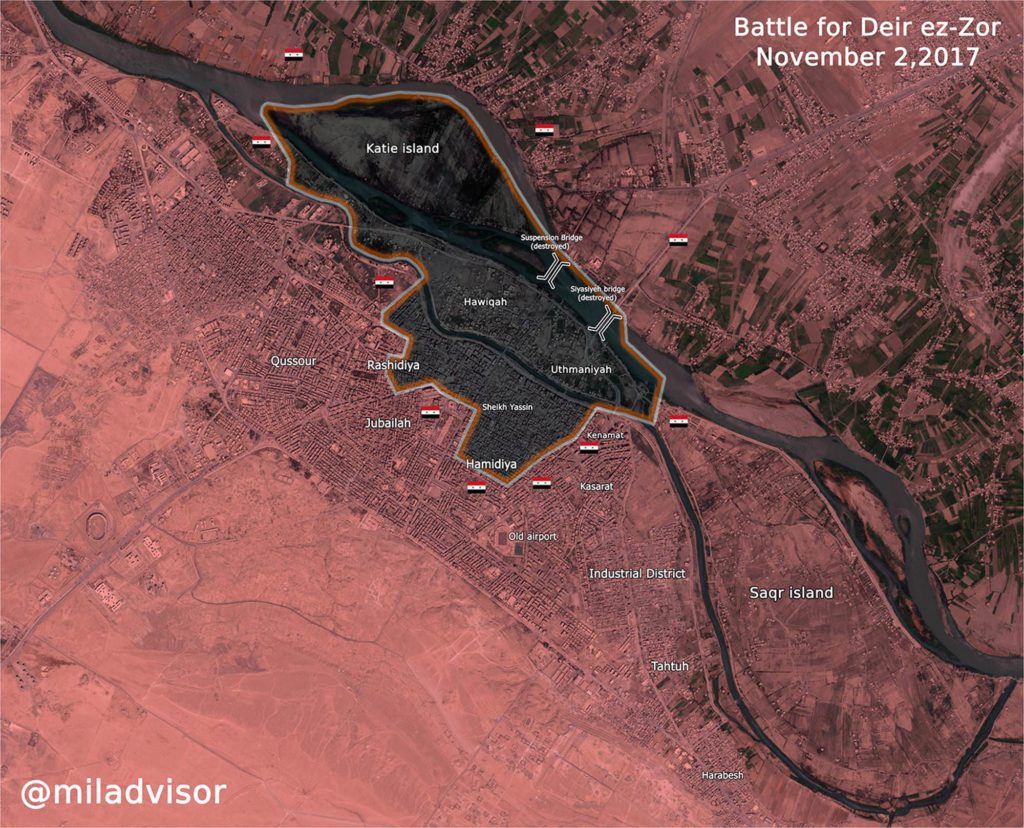 So what! Syrian army and russia has ineptly allowed yanquikurds to take over 80percent of syrias oil and water. Slow strangulation of syria over time. No economy , slow death of health and education services.slow radicalisation to moslem jihadism through poverty everywhere you look.

Russia better have an ace up its sleeve to save syria as so far only winners seem to be russia,kurds ,iran ,turkey and usa. Syria seems left out.

Syrian Kurds? They are looking at the same fate as the Kurds in Iraq. The US briefed them yesterday they will only be supported during the ISIS campaign. When the SAA is finished with Idlib it will be looking towards the Kurds again. By that time the Kurds won’t have any protection by anyone anymore.

I hope so. What makes you think syria will be able to get turks out of idlib. After all turks are still in occupied cyprus.

Hitler was the US proxy to brook Europe and Russia, their main competitors for the World domination Marshal Plan was done to boost the US economy by rebuilding all they have destroyed. Europe is still occupied by the US/British NATO thanks of the “Gladio”, loge P2, etc…, the Al Qaida, ISIS, Daesh and al ancestor — Seventy years of harassing political establishment and people of Europe http://www.voltairenet.org/article190171.html — The USA’s decades long warfare against China http://www.voltairenet.org/article177063.html

Could not agree with you more. As for racism, they have started with euro countries of the periphery. Yugoslavia,greece, soon spain then italy.once usa feels secure, then eastern europe poland ,hungary ,romania ,bulgaria all chewed up to leave france and germany. We know how that will end dont we?

And the Kurds would sell this Oil how?? If they are surrounded by Syria, Turkey and Iraq Shia that also don´t want Kurds to threaten their sovereign. Kurds will have to negotiate, or they will starve. the truth is that the oil will remain Syrian while the kurds will have their share as they remain a part of Syria.

I hope you are right. Maybe they sell oil to iraqi kurds who then put it through turkey to ceyhan ie mixed in with russian kurd oil investments in iraq kurdistan.

You can call me Al
Reply to  Andre Lopes

The extraction rates are negligible, remember that the US imposed sanctions before the war for something like 8 years thus no spares etc. Forget the oil, that is way down the list, but admittedly a show of force and achievement to the outside World.

Regards the Kurds, the US are now playing 1 set off against the other, I don’t think it is a big problem for the Syrians, more a problem of the Kurdish disunity kicking in; probably both backed and egged on by the Yanks.

The Kurdish/American forces are already overstretched in Deir Ezzor. Once Syria clears the rest of the territory of IS terrorists it will be able to easily push the US coalition forces out of the oil producing territory. Let’s be patient.

1. OIL – The oil fields are irrelevant, they produce little, dud to the sanctions and the war.

2. Water – how in Gods name have Syria given up the water ?; look at the map, from the top left to bottom right runs a big Fresh water river and the SAA and allies are next to it.

You do make some strange comments.

Al, as far as i can remember the dams are still in isis or usa kurd control. Thus electricity genetation and irrigation is out if syrian control.

Being close to the river means nothing. Syria still does not control it to any great extent and is not even really over the river for large stretches.

This is excellent news. If progress by SAA and friends continues like that Syria will be liberated from ISIS before the end of the year.

The Syrian government forces should let this front mature by itself letting ISIS run out of munition. ISIS are totally surounded and they have no where to move. The Syrian government forces should instead concentrate on liberating Al-Bukamal before the 4,000 US colonial imperialist illegal invaders of Syria invade and occupy it themselves leaving the Syrian government and people under total land blockade. The Tiger forces should be re-deployed to the Al-Bukamal front NOW, before it is too late. From the Zio-Nazi air attack on one of Syria’s main Zinc factory in Homs employing more than 2,000 workers and the deliberate US destruction of Syria’s main infrastructure and indistry, it is obvious that the aim of the Western colonialist imperialist invasion terror forces is to starve the Syrian population into submission. Trade exchange through land routes is a vital life line for any countries, and Syria more than anyone else. The campaign to re-open the only ground route Syria has left, to its friendly Iraqi neighbour should be top priority.

Very True. I wonder if an airborne regiment could land (Al-Bukamal) there and hold it till reached by land?

An airborne regiment could do it easily, as that has a strength of a couple of thousand men. Too big for ISIS to dislodge. The problem is that the SAA does not have that kind of strength and the Russians and the SAA do not have the airlift capability in theater to lift those kinds of numbers.

I totally agree with you there and have said it many times – all supply routes are taken.

However I was a little lost regards “The campaign to re-open the only ground route Syria has left, to its friendly Iraqi neighbour should be top priority.”

Nah, let the Iraqis put it into the bag and hand it to the Syrians so that the Washington barbarians get one in the eye….

I like the expression “to give up the ghost” : ) Never heard it before.

For me it is a sign that the author is of german ancestry. “Den Geist aufgeben” is a typical german expression for “pass away”.

It used to be common in England too, when people read books.

What SAA Should Do: Liberate Hamidiyah,Rashidiyah and Sheikh Yassin. Liberate the main land part of Deir Ezzor. Move the Tiger Forces from there. Line up and take a shot at Abu Kamal, Before the US Arrives tries to steal the syrian sovereignty.

I think you mean “serious defence” rather than “series defence”