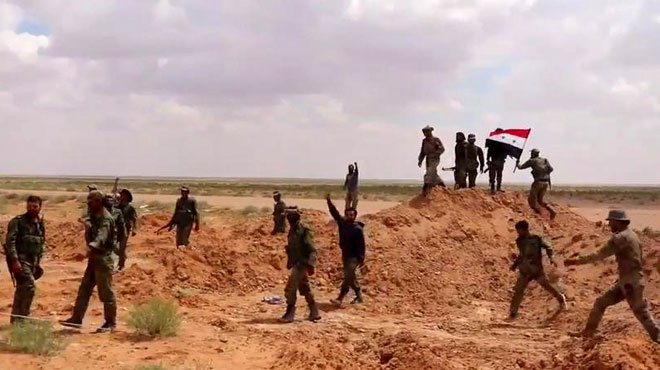 On June 3, the Syrian Arab Army (SAA) and its allies repelled an attack of ISIS on their positions east of the town of Hasrat along the western bank of the Euphrates River in the southeastern Deir Ezzor countryside, according to the Syrian Arab News Agency (SANA). Reportedly, the SAA killed and injured most of ISIS fighters who participated in the attack.

Later, the Hezbollah media wing in Syria revealed that ISIS fighters had launched their attack from the town of al- Shaafah on the eastern bank of the Euphrates River and had used small boats to cross the river. A military source also confirmed to SouthFront that ISIS fighters crossed the Euphrates River successfully and managed to capture several positions before they were detected by the SAA and its allies.

Al-Shaafah, which is located south of the town of Hajin, is supposedly besieged by the US-backed Syrian Democratic Forces (SDF). This fact allowed many Syrian pro-government activists to suggest that US-backed forces facilitated the attack on the western bank of the Euphrates River.

According to local observers, ISIS was trying to open a route which would have allowed its besieged fighters along the eastern bank of the Euphrates to withdraw towards the Homs desert in central Syria. 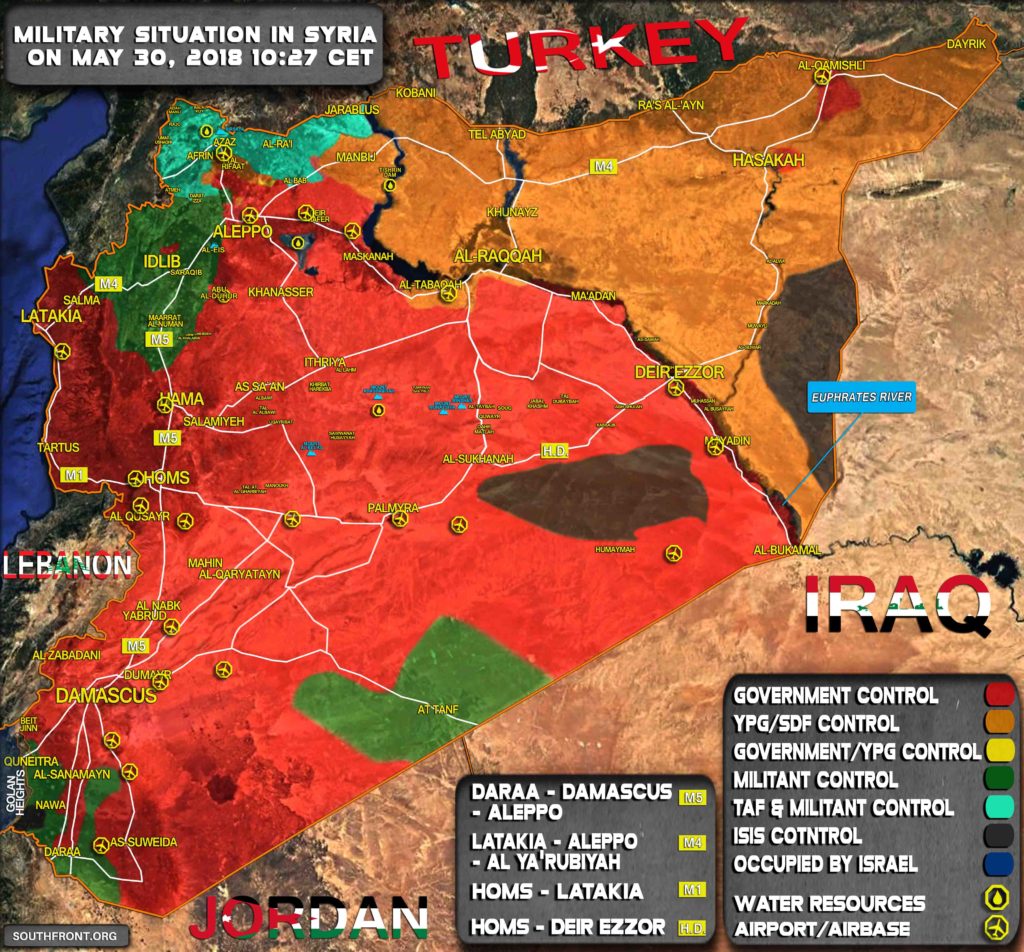 where the people telling me off yesterday……….I told u folks the next attack will be in dei e zoor area…i wrote ” the fuckin us/jew terrorists will attack close to T2 or T3 or Palmyra….”…….LOL

people wake up….russia is controlled by them fucking jews just as the us……….history 1917 was the jewish takeover of russia with 20 million dead frrom 1917 till 1935……. stop that nonsense talk of agreements and such……the JEWS want a one world governemnt with jerusalem as its capital under jewish satanic leadership. Thats the fuckin truth.period.

You are right about the jews and their wet dreams and wrong about Russia being controlled by the jews. As I know already that you are also on the jew pay roll I shall not waste time to reason. Wait and see what happens. You might be surprised.

look bro…History…1917 what happened the so called russian revolution…..everyone of the top 100 “communists” was a jew.fact. and from 1917 to 1935 over 20 million native russians were murdered.fact!!!!!!!!! I seriously dont understand why I have to write FACTS here, and people keep vcoming with “wait and see..surprise coming” sorry bro….if you´re not in the upper echelon of power in russia and have a direct line to putin…u r guessing.I´m not. and i wont write no more of history…read..learn.and stop guessing about zthings u want to become true.I too want a lottery win, a supermodel as wife…but thats a wish. If u sit back a minute, and look how syria has developed…..yes its true the terrorists headchoppers have been defeated in alot of plaves in syria, with the help of the russian air force.but now look ata the big picture. Turkey has now invaded the north of syria under the eyes of russia. Israel has been constantly bombing syria..over 120 times already under the eyes of russia. Nato has built over 3 dozen bases in syria under the eyes of russia russia wants/tells/announces that iranian and hezbollah forces have to leave syria russia sells S-300/S-400 to all kinds of countries including latest news was rwanda, but hey syria nada nato has constantly bombed SAA forces in the east everytime when they legitamitly wanted to take back THEIR country….russia nada syria wants to take back the west of daraa area..nato warns of engagement and russia talks of agreements Russia with nato are pulling the strings ever tighter and tighter and tighter…..so yeah syria has damascus, aleppo, palmyra etc… but most border areas are now controlled by foreign forces. I repeat. Most border areas are now controlled by foreigners.north-turkey, most of the south by us or iraqi proxies, west israel and east nato…great plan…. and now russia tells hezbollah and iranian forces to leave …. super plan…..

the end is crystal clear…

Because facts can be twisted as you are and the name is fitting a NUMB and DUMB hater of life in general. Of use to nobody same as anyone living in the past “Arabs”.

“Most border areas are now controlled by foreigners.north-turkey, most of the south by us or iraqi proxies, west israel and east nato.”

That may be so, but what you are not saying is that much of that “border area” to the south-est and the east is a lot of uninhabited desert. The most important “border” for Syria, and the one you conveniently fail to mention, is the one that Syria controls and that gives Syria access to the entire world, is the “border” to the Mediterranean sea. That is 100 times more important than 500 miles of border in the desert. Syria with the help of Russia fought very hard to keep that access to the rest of the word in its possession.

Well that port to the mediterranean sea (Tartus) is controlled by Russia.

He was also a Zionist

They cannot say their bullshit anymore now it is obivious that the russia is fighting for jewish interests and they listem to them like their masters. Give it two weeks more and it will be obivious even for the most brainwashed ones.

There are Tons of Hasbaras in Here… may the word Hasbara be known to All Mankind….

Some of them sorry ass suckers come from liveuamap…. they are NOTHING… I went in there…Baron Von MuleBanger controls the Switches… he deletes my Messages… that is called Freedom of Speech…. Baron Von MuleBanger is a chickenshit Coward with many Different Accounts…he is a True Cockroach

we will kill all of you

We? Cowards like you are the first one to dig themselves under ground.

Those who believe, fight in the Cause of Allah https://youtu.be/AqYeNIzUkdc?t=1m20s

Wake up people! The russian propaganda is collapsing under own weight, what a beautiful times https://cdn.images.dailystar.co.uk/dynamic/1/photos/190000/936×622/952190.jpg

As well as your propagenda is. XD.

Everybody knows for who ISIS is working. Al Baghdadi code name is Shlomo. XD.

ISIS is in Russia?! I never knew.

You are insane to believe that the “Jews” took over the Russian Empire in 1917. The Russian masses overthrew the corrupt Czar’s regime. What did the Bolsheviks inherit from the Czar? An 80% peasant society with 90% illiteracy (Russian Jews were always the most educated in the Russian Empire). That is what the Czar and the Orthodox Church did to Russia, kept them in the intellectual darkness of humanity. In the First World War, the Prussian Army has a literacy of over 75% and the Russian Army was less than 25%. The Czar had to buy his weapons from his enemies which is why during the first war, the Czarist army ran out of bullets. After the end of the Civil War, the Bolsheviks (“Jews”) engaged in a massive literacy and university education plan. In twenty years till the start of WWII, the Soviet education level rose to the level of the Germans. If you want to accuse the “Jews” of anything, accuse them of educating the ignorant Russian masses.

Those of them they didn’t starve, torture, shoot, or enslave.

because daesh is 100% controlled by jewish interests, hence they are buddies of the british,of the us etc…..

isis is a covert operation by mossad…always was, always will be……iraq was decimated and practically takenover from 1998 onwards…..all those thousands of suicide attacks that took place by alqaida or isiis were all mossad operations, to decimate the iraqi population and create chaos.. remember the sentence ” ORDER OUT OF CHAOS”…..lol that was the plan…and they executed it perfectly…….

ISIS-Daesh were created by Israel-USA-NATO, with the help of Qartar, Saudis, Jordan and Turkey to destroy Syria. Israel sold these fantic mercenaries seudo-muslim the idea of an Islamic State, just to form a big terrorists group to put them in Syria to make the job. Enough money with few imans are enough to convince fool (or needed) people. However, Russia-Syria-Hezboah-Iran armies are destroying these animals everywhere in Syria.

Still don’t fight ISIS in this region ?? XD. One year ago, USA and Russia were grabbing lands as the speed of light. Now, one year and they did nothing. XD.

IF Idlib and the Desert near Deir Ezzor had not been left as a Toxic Waste Tip for all the US Coalition of Terrorists it would have taken far longer to clear the pockets of Takfiri terrorists.

It would have also been impractical for the Syrian government to create vast POW camps to house many tens of thousands the terrorist scum. As well as internment camps for their families. All too many of whom are not Syrian Nationals anyway.

Perhaps you should start a campaign for them to settle in the USA Serious ? :)

Many of them have been on the US payroll anyway

How do you expalin the fact that one year ago, Russia and USA were grabbing lands at the speed of light and now, 1 year, no move.

Except of course for Ghouta, Duma, Yarmouk Camp, The large pocket in Northern Homs, Western Aleppo toward the Idlib border,A large chunk of the Syrian desert near DeirEzzor.

Routes that once opened for ISIS and Al-Qaeda will be closed for the regional nations. US and Israel practically holding Palestinian, Syrian, Iraqi, Yemeni etc nations hostage and keeping them separate from each other.

So they will be not able to help each other by free trade and share their defense hardware and army forces. Once they are not united then Israel and US can easily air strike them.

Try my plan. Remove USA from Iraq and Syria and see what happen. ISIS is dead in two weeks.

When tere is a firefighter who put fire, maybe try to remove it. XD.. I don’t know. It’s so obvious. But, I don’t know. Talking with stupid people is useless and waste of time and energy.

The fucking lying scheming fake jews they work so hard to fool the american goyim to fight and pay for their wars for them fake jews will only stop when they are taken head on,they are sneaky cowards at heart,that’s why they created Isis out of the inside job 911 and lied about Iraqi WMDs,the same with Syrian fake chemical attacks,while at the same time they slaughter unarmed Palestinians. You can’t make this shit up,the Synagogue of Satan.

Ruskies should clearly tell to yanks: either they clean that ISI pocket, or SAA will with RuAF.

Don’t you know? The U.S. is having trouble locating ISIS troops on the ground. If they only knew where the ISIS troops are I am SURE they U.S. would attack them.

Would local Kurdish forces facilitate an attack across the river? Perhaps. But know they do so without any help or approval from Washington. The Kurds and Iraqis are far to disunited to be effective against anything but easy pickings, so don’t misuse the word ‘supposedly.’

“ISIS FIGHTERS CROSS EUPHRATES RIVER” Transported on the other side by their allays terrorists US and Turds.

As everybody already know, USA works with ISIS for planing and doing attacks to Syria army. Well, Syria army must be very careful with ISIS, USA, and kurds and no to have overconfidence.

Sounds more like the SAA discovered a few small groups that slipped over to pick up some supplies.