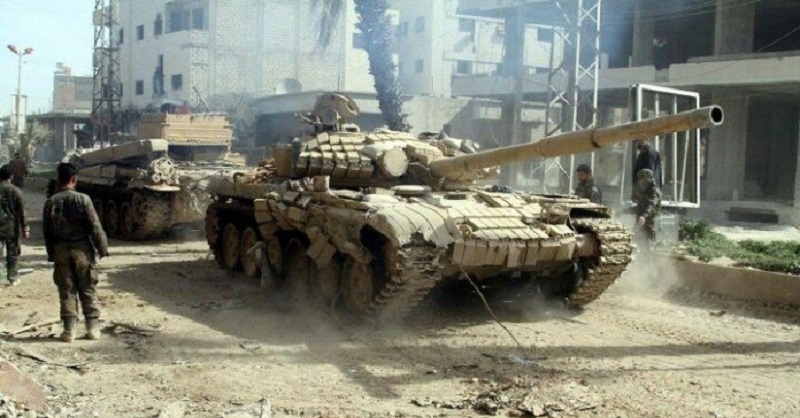 The Syrian Republican Guard and the National Defense Forces (NDF) have successfully foiled an ISIS attack on the 137th regiment base. ISIS militants had tried to infiltrate into government positions west of the Sonouf hill but failed to overrun Republican Guard defenses.

During the clashes, government forces managed to destroy an ISIS position near the 137th regiment base yesterday. Government fighters tried to storm several ISIS positions in the Al-Rasafa district in the city of Deir Ezzor.

The Syrian military also shelled ISIS gatherings with artillery in the vicinity of the Deir Ezzor Military Airport, the areas of Al-Makaber and Al-Omal, and the Al-Sonouf hill.

According to local sources, two ISIS commanders were killed during the clashes yesterday and today. The terrorists were known as “Abu Ammar al-Iraqi” and “Abu Sayyaf Hassrat”.

Earlier this week, government troops regained control over the electricity company in Deir Ezzor getting closer to linking up the government-held area of the city with the airport. Reports now indicate that the government operation to break ISIS siege on the city is a very close to its success.

Syrian Air Force warplanes bombed a river crossing point between the city of Al-Mayadeen and the village of Ziban, destroying several ferries.

Separately, airstrikes hit a house belonging to an ISIS foreign commander in Al-Mayadeen was destroyed. The airstrikes were carried out by a warplane allegedly belonging to the US-led coalition.

DEIR EZZOR has being a huge humiliation to ISIS. It’s being protected by the Republican Guard, the elite of SAA, because if it falls to ISIS, Syria would be split in two, the Sunni corridor between Saudi Arabia and Turkey would be formed and the war would be lost.