On July 11, the ISIS-affiliated Khalid ibn al-Walid Army entered the villages of Hayt and Khirbat Y’ala in the western Daraa countryside after an agreement with the local Free Syrian Army (FSA) groups, according to the Syrian pro-opposition outlet Enab Baladi.

The FSA accepted the agreement following a large attack of the Khalid ibn al-Walid Army on its positions in Hayt and Khirbat Y’ala. Under the agreement, FSA fighters handed over their weapons to the ISIS-affiliated group and withdrew to the nearby village of Zayzun.

A day earlier the Syrian Arab Air Force (SyAAF) carried out a series of airstrikes on several positions of the Khalid ibn al-Walid Army around Hayt. The pro-government blog al-Masdar News said that the airstrikes were aimed at supporting the FSA in order to prevent the terrorist group from expanding in the western Daraa countryside.

According to the Syrian Observatory for Human Rights (SOHR), 16 FSA fighters and 12 fighters of the Khalid ibn al-Walid Army were killed during the clashes around Hayt.

Local observers fear that the Khalid ibn al-Walid Army may force the FSA to accept similar agreements in other areas in the governorates of Daraa and al-Quneitra. Such a strategy may allow the terrorist group to expand rapidly and to threaten southern Syria.

If they withdrew to the nearby village of Zayzun now they are in SAA freed territory.

Yes, the US is desperately now trying to hang on to that small section of southwestern Syria that they have their proxies and mercenaries illegally occupy..

All I can say is, go SAA and annihilate these bastards… The sooner the better

Detail: the US run “rebel” forces, in this case, are now in SAA controled territory.

The nutandyahoo isis terrorists will do everything to stop the Syrian Forces getting close to occupied Golan Heights.But it wont work.

“…On July 11, the ISIS-affiliated Khalid ibn al-Walid Army entered the villages of Hayt and Khirbat Y’ala in the western Daraa countryside…”

The FSA was cut off an finished in Hayt, so that’s no surprise. I wonder how many TOWs they turned over to ISIS? 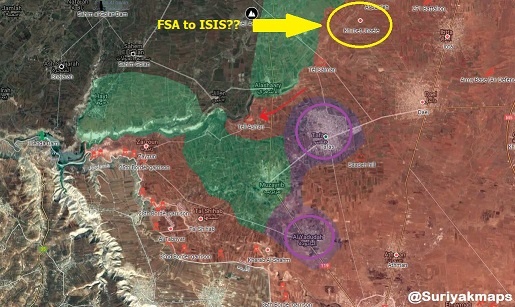 The Tigers are laughing.

They are defeated as Khalid bin Walid Army lost many troops recently and Western Syria will soon be reconciled as they are stronger than a hundred or so FSA that were at Hayt. Things go swiftly as they have more than enough troops to wipe out ISIS forces, Israel has been told to not let any ISIS forces into that part of the Golan or Russia and Syria will be forced to enter that region.

Ok fsa can reach an agreement with isis but not SAA??? What is this bullshit