Terrorists of the Islamic State (IS) group blew up the facade of the Roman amphitheater and the tetrapylon in the ancient city of Palmyra. 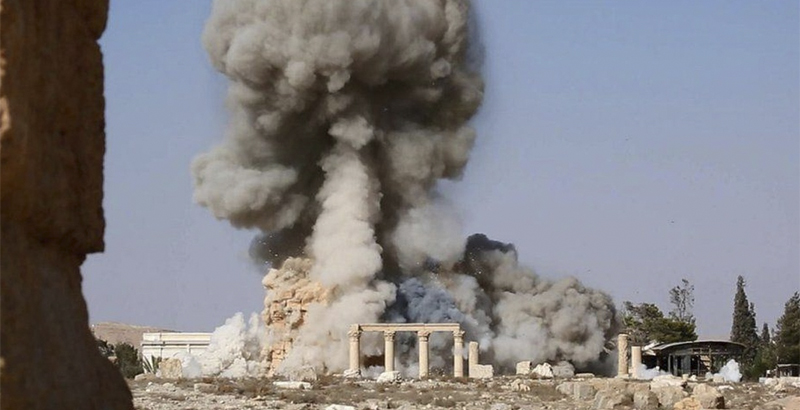 Terrorists of the Islamic State (IS) group blew up the facade of the Roman amphitheater in Palmyra, which is considered to be one of the main landmarks of the ancient city, the SANA news agency reported, citing its own sources in Palmyra.

In addition to the amphitheater, terrorists also destroyed the tetrapylon – a ruined building with four inputs.

The information about the destruction of the buildings was confirmed by Directorate-General for Antiquities and Museums (DGAM) in the Syrian Arab Republic.

Press secretary of the Russian President, Dmitry Peskov, said that the actions of IS terrorists, who ruined the ancient buildings, are “barbaric.” He stressed that “what is happening is a real tragedy, a tragedy in terms of the loss of the world’s cultural and historical heritage.”

UNESCO Director General Irina Bokova said that the destruction is a “new war crime,” as well as an “immense loss for the Syrian people and for humanity.” She stressed that IS terrorists are “seeking to destroy both human lives and historical monuments in order to deprive the Syrian people of its past and its future.”

On May 5, 2016, a concert of the Mariinsky Theatre’s Orchestra, dedicated to the liberation of the ancient city from IS terrorists, took place at the amphitheater of Palmyra.

After the first capture of Palmyra, terrorists sold artifacts, which they found there, and blew up ancient buildings, which, in their opinion, was at variance with Islam. In particular, they destroyed the temples of Bel and Baalshamin, the triumphal arc and several funerary towers. Director of the local archaeological museum, Khaled al-Asaad, was also killed by terrorists on the ruins of Palmyra.

In March 2016, the Syrian Armed Forces, backed up by the Russian Aerospace Forces, liberated Palmyra. Russian sappers cleared the city of mines, and archeologists created a 3D-map of Palmyra, which would help to restore the ruined monuments in future.

However, in December, the IS concentrated its forces to the east of the city and launched a large-scale offensive on it. On December 11, terrorists took full control over Palmyra, and the Syrian army was forced to retreat to the west, to the T-4 airfield.

The day before, the Russia’s General Staff said that IS terrorists sent a large quantity of explosives to Palmyra in order to destroy the ancient monuments. 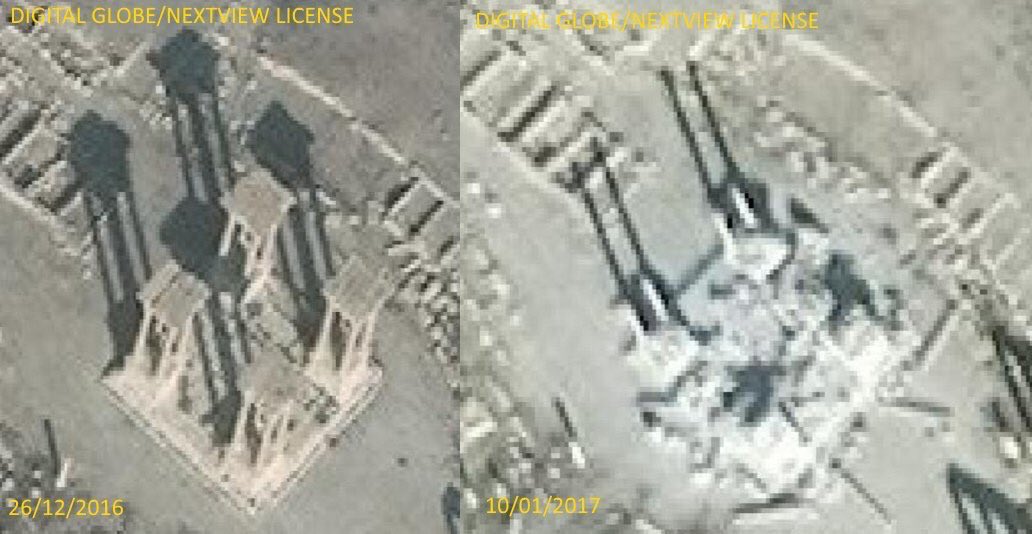 Sad to see pictures. ISUS is showing what it brings to this world, only death and destruction. I can neither fathom nor understand their hatred. Do they lack a soul? :(

They claim to be “religious” but have no heart .

Standing for over 2000 years without getting destroyed, in numerous wars. But these thugs, satanic worshippers destroy it in matter of weeks.

Gift of the Zionist scum to humanity. Don’t be fooled for one second that ISIS is anything other than Israel’s dogs.

Your ‘anti-Semite’ bullshit doesn’t work anymore. Not here, not anywhere.

It works through the whole civilized world, no matter what you think of it, muslim pig.

What part of Isreal is civilized you complete moron? 90% of Jews are European-Russian. How does that make them semitec? The anti-Semitic bullshit has worn itself out you piece of shit.

FYI: I am Russian from St.Petersburg, and for me it seems very silly if muslim is so sure that jews are the reason of all evil on earth. Just compare Jewish contribution to human civilization with your muslim contribution. So it’s better for you to shut up and prey for the Russian army which is trying to create normal order in wild muslim world. Without Russia you are nothing, always under barbarian power: where muslims occure there is religious hateness, criminality, terrorism. And the reason of it is your bloody angry religion, not Jews, West, East or someone else. Islamists always walk hand-in-hand with hateness and barbarism.

Perhaps you are Russian Jew. Did you overlook that Jews brought about the Bolshevik Revolution and the Jews were overwhelmingly present as Cheka thugs, The Jewish Red Terror killed 60 million Orthodox , Muslim Soviets, Russians. If Jews are so good, why have they been evicted, or expelled from 84 countries in the world, sometimes more than once, for a total of 109 expulsions. Jews brought the world terrible things like mustard gas, WW1, Atomic bomb, WW2…etc. They are so bad that the Czar’s put them in the Pale of Settlement, to keep their danger away. Peter the Great, and Catherine the Great respected the Muslims on their territories. Czar Nicolaus the first, had his personal guard as Muslims. Muslims and Christians of the Soviet Union fought and died together against the Nazi war machine in world war two. The Muslims of the Caucuses were the ‘shock troops’ of Stalingrad. They were the first ones to reach and capture Berlin.

Who do you think controls the U.S., Jews do. Thus, Jews are the ones threatening Russia today with war, like they have the Arab world for 70 years now. Jews are using America.

The Islamic world was directly responsible for the cultivation and civilization of the west. Islamic knowledge, sciences, philosophy, medicine, math, astronomy etc….brought about the renaissance and enlightenment of the west. There is a crater on the moon named after a Muslim scientist, Ibn -Hazen, wiki him. And a asteroid belt named after another. Wiki the Islamic golden age. Avvicena, Avorroes, Al-Farabi, etc….the list goes on. The Islamic world was set back when the Mongols invaded and burned down Baghdad , destroying the knowledge base of the world. Then came the fascist Crusades.

Today, Muslim Chechen’s (President of Checnya, Khudyrov’s boys) are fighting with their brothers , the people of the Donbass against the Jewish mafia that now run the Ukraine. Victoria Nuland, a Jewess is the on responsible for Maidan. The whole junta in Kiev are jews.

So educate yourself. Once the victorious Syrains (Muslims) and Russians (Christians) destroy the fake Muslims of ISIS, and their masters the CIA/MOSSAD, ; once there is peace in the Islamic world, we will achieve great things again.

Go educate yourself. You sound juvenile.

I am Slavic Russian and Orthodox Christian. Such pigs like you are not able even to imagine, that people other than Jews may be non-antisemitic. And your proposal “go and educate yourself” you’d better address to yourself, muslim barbarian. Where muslims are there is always lack of education, primitive culture, hateness, terror and evil. While among muslims there ain’t even one person awarded with Nobel prize during it’s whole history. Sunny hate shea, shea hate sunny, and even inside both confessions there is a hateness between different religious groups and so on. Muslims destroyed great cultural assets of the whole human civilization just because they are not islamic. Have you ever heard if christians ever destroyed any muslim shrines? – No, it never was and it will never be.

Jews own the Noble committee you uneducated fool. How old are you? You sound young and not very informed.

Jews killed Czar Nicolaus 1, and Czar Nicolaus 2. All the Bolsheviks and Checka were Jews. Muslim Russians were the bodyguards to all the Czars, starting with Peter The Great. Peter the Great , like all Czars hated the jews, because of how they are, treacherous and barbaric. Today, Muslims and Orthodox Christians are fighting together in Syria and the Donbass against Jewish conspiracy and terror. This is the new norm for the future, and your silliness wont, cant stop it.

Stop licking the Jews boots you stupid imbecile. Get off the floor and embrace new realities. Boy.

‘You shall know them by their deeds’ —- Jesus

who sent them there? Who gave them or sold them the explosives ? Why were they not bombed while transporting themselves and the explosives? Why do we all sit down and look at this and complian but do nothing to get out Western Governments to stop helping ISIS…