The ISIS defense fully collapsed under pressure from the Syrian Arab Army (SAA) and the Tiger Forces in the northeastern Hama pocket, according to pro-government sources. Government troops reportedly liberated Ibn Wardan Qastel and the large nearby area from the terrorists.

On the same time the situation in Muakara Shamali, Abu Ajwa and Rasm Jubb al-Haamlan remains unclear. Some sources say that ISIS had already withdrawn from these points and its defense is contentrated in the area of Suruj.

Some sources even speculated that ISIS units withdrew from northeastern Hama to the province of Idlib overnight. However, these reports have not been confirmed by any evidence yet. 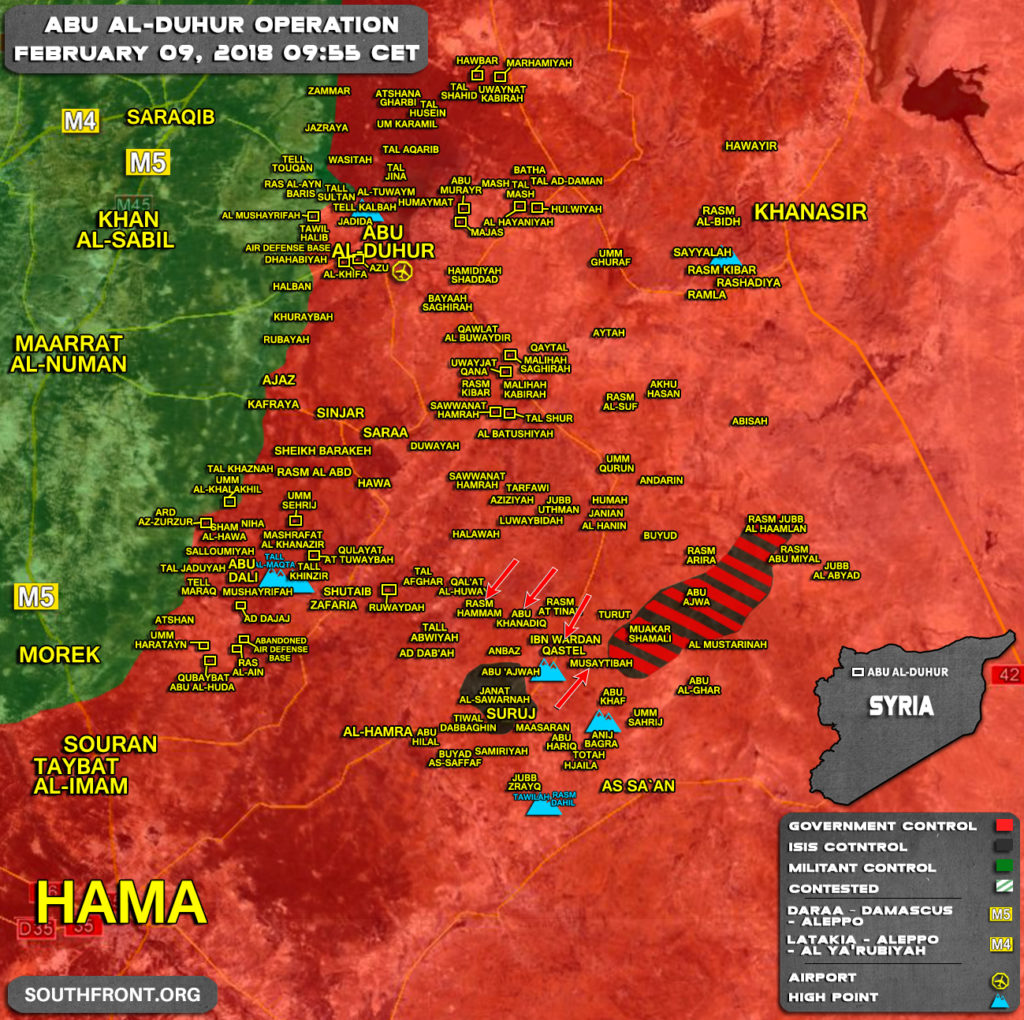 How can ISIS units withdraw? Has the Syrian Government sent their green buses again? I do understand the philosophy behind it, though: ISIS and HTS mixing means less work for the SAA & it’s also a good opportunity to send some informants with the drugged & brainwashed pack. And as a bonus, they would infest the HTS terrorists in Idlib with fresh beard lice, so it’s a win-win situation :D

It’s a large desert there, with some villages scattered here and there. SAA didn’t built a wall. Anytime a small force, with some luck and preparation can sneak in and out.

You can call me Al
Reply to  Ishyrion Av

500+ and tanks and vehicles isn’t a small force though.

Nope. Not a desert and sneaking out – excuse me but the government controlled area surrounding those pockets wasn’t just a thin line. The Syrian government always has offered a surrender or die policy and instead of large prison camps they tend to send those who surrender into the next pocket, they quite likely have done so here as well.

You are right that it isn’t desert but rather consisted of more than 130 towns and villages. However, ISIS did not get there by the SAA, they got there because a HTS faction had defected to ISIS.

There were never any big numbers in Hamas region and Syria has offered surrender or die ultimatum. Like many assumed they fled earlier and the last vestiges of them are grouped in small areas.

Personally, I do not believe it, it is both illogical and shear madness if it were true.

You know as well as I do, on the vermin side, they have many a computer warrior spewing out shite. It maybe correct I don’t know, but I shall wait and see.

It does seem that I was wrong – apologies – https://www.almasdarnews.com/article/breaking-syrian-rebels-panic-mode-isis-assaults-east-idlib-hama/

Like I warned about them building up forces to break out of the pocket,it happened and can only be aided with satellite intel from the USUK NATO satellites. They needed serious coordinated attcks from loyal forces on the outside of which we now there are thousands among those proxies. Let’s hope they can’t take the Afrin Region too soon as the SDF have said they are not part of the US/ISIS DMC forces. Things as I have said have more interpretations than intended or expected, you can never take anything at face value.

Tunnels. Same as always. That is how ISIS troops got there and how they withdrew.

Have a look at the map – those tunnels would have to be several kilometres long. Quite unrealistic.

Sorry, wrong comment. ISIS got there by sleeper cells and a HTS faction that defected. One of these are Harakat Nouriddeen Al-Zinki’s. They were attacked by HTS as Al qaeda tried to cleanse Idlib and gain total control but this faction resisted and defected.

Unfortunately, it looks like we were wrong and others were right.

I am gob smacked, amazed and bemused, but hey, if it works, it works !!.

See my reply to You can call me Al, above.

Hopefully total number of POWs will be – zero… https://youtu.be/QKD5TgHWyxM

This pocket, which was terrorist occupied for years, has collapsed a lot faster than many people expected. I’ve been saying for weeks that the Syrian government coalition is reaching the point where they will begin having excess capacity for the first time in the war. And the speed with which they’re clearing this pocket is vindication of that. this puts the government in a much stronger negotiating position with the remaining terrorist hold outs west of the river and the Israelitani Kurd secessionists as well.

Nice comment. I think it was Terra Cotta that mentioned that the Syrians have just let loose “The 6th Corps” after training.

For whatever reason, the above is fantastic news and I hope in the next week max. that whole area is cleared up.

Several sources report huge convoys leaving the IS pocket towards Idlib as soon as SAA had cleared its frontlines to the north east.

Is it not Russia, Assad claiming to US works with IS?

Is it not reality that Turkey works with IS, incorporating them into TFSA, Russia and Assad in creating the pocket for IS that is now targeted towards HTS?

Will soon all the parties involved have their pet IS brigades?

It is illogical, where are you getting the info ?.

leon mc pilibin
Reply to  You can call me Al

Syria has previously provided save passage for ISIS and same goes for the US. It is absolutely normal because that means no fighting has to be used and alot of soldiers can be freed to focus on other areas. Do u really think the SAA would advance so quickly in Idlib if they did not offer safe passage to jihadis to evacuate to Idlib from different pockets? They freed up soldiers and can now shift focus to one single territory.

FUCK OFF ;;YOU ZIONIST PRICK:

They certainly weren’t allowed to leave with tanks and cannons, this is made up stuff.

You do not cite your sources so you are probably pulling this out of your ass. However, if you are correct, it is a good thing, because the more terrorists are concentrated in Idlib and then pressured together, the bigger targets they become for artillery, cruise missiles and jet strikes. The virgins are waiting.

I tend not to believe these sources. 1. How should the huge convoy come from, how much material could they have had in the pocket. 2. Was there still a significant number of combat vehicles there? The alleged number of fighters that was counted two weeks ago was also absolutely exaggerated. 3. That makes no sense at all, neither for the government forces nor for the Islamists.

I doubt about the SAA and IS fighters deal. If SAA has the chance to eliminate them, then they would do it. If not, tomorow SAA would be faced to the same warriors but under a better conditions for IS remnants.

You can call me Al
Reply to  alexis

Just read Dutch below – where is al this coming from ?, why would the SAA even contemplate this ??.

ruca
Reply to  You can call me Al

Level 8 – Legatus Legionis Canthama An interesting aspect of the whole thing inside the pocket….a lot has to be confirmed though.

1) ISIS suddenly appeared west of the railroad, out of the blue, there was no fight nor offensive.

2) There is a growing belief these ISIS terrorists (as mentioned before they are mostly Syrians from eastern Hama), accepted a deal to storm al Qaeda in Idlib.

3) These ISIS terrorists were the same from eastern Hama that moved to NE Hama and southern Aleppo.

4) It is early to conclude anything, but this could be an intended move to use cannon fodder to fight turkish backed al Qaeda (last time it happened the SAA liberated 1/3 of Idlib/southern Aleppo/NE Hama). There are folks also saying that these ISIS terrorists are heavily infiltrated by SAA officers.

We will learn more about it, do not fall into the rational that ISIS broke the SAA lines and took many villages (Fort Rus is reporting it) since no SAA held village was lost.

Yes I was wrong it seems, apologies.

ruca
Reply to  You can call me Al

Hey! No apologies required. We are all in this together. Each hand washes the other, or makes it more dirty. Let’s help each other.

That’s not the style of the SAA and in the past they always have offered those who surrendered to leave. Assad said so himself many times in interviews. That way the SAA got many defectors from the FSA back in 2015/16

Regarding FSA it is true, but IS, it is something different, they are (IS) strongly affected by their ideology, uncorrected…another matter is, that SAA understood the situation and use the advantage to incite the IS fighter against FSA rebels, they could kill each other without the loses to SAA fighters…

You can call me Al
Reply to  alexis

Arggh, I thought along the same lines, until this – https://www.almasdarnews.com/article/breaking-syrian-rebels-panic-mode-isis-assaults-east-idlib-hama/

To all those who wonders how ISIS got a precense there, ISIS got there by sleeper cells and a HTS faction that defected. One of these are Harakat Nouriddeen Al-Zinki’s. They were attacked by HTS as Al qaeda tried to cleanse Idlib and gain total control but this faction resisted and defected. In fact, there were to jihadi HTS factions that defected but I forgot the name of the other one. That is how they got tanks and ammunition.

And another area cleaned up, now the rest of Idlip. Or for a start cut it off from Turkish border

The best revenge for the shooting down of the Russian jet with a TOW is the elimination of all terrorists. This is happening quickly, and with the intensity of reported Russian air strikes in Idlib since the downing, it looks like Idlib will fall quicker than expected as well.

There must be a lot of crying going on at Langley and in Tel Aviv.

Supposedly crossed SAA territory and is now engaged against HTS .

Very well put RichardD, I would like to add to your statement: the lack of high casualties (documented) & prisoners taken (documented) lead me to believe that the majority have went to ground and will instead persue a taliban style action. I don’t think they managed to get out during the night, if they did it would reek of army corruption and complacency on the part of the SAA!

Still it remains to be seen if they pulled back to there last and strongest position for a last stand event?!

400 men , facing certain death from SAA , made a bolt for Idlib where they are now up against HTS . Likely well equipped , and will live a few days longer . So a select few might even make it back to Turkish lines !

Ronald this is the problem with the numbers, about 3 weeks ago there was estimated 1.5k IS in the area and another 3k max of HTS. According to news here a lot of the latter defected to IS and the rest escaped to idlib, statements released by the SAA even identify a handful dead here n there and those numbers don’t add up! For them to run you are looking at convoys of 60+ vehicals or long lines of walking troops these things are impossible to miss!

Now either the original estimates were vastly exaggerated concerning HTS & IS capabilitys or like I said in my original statement they were allowed to leave!