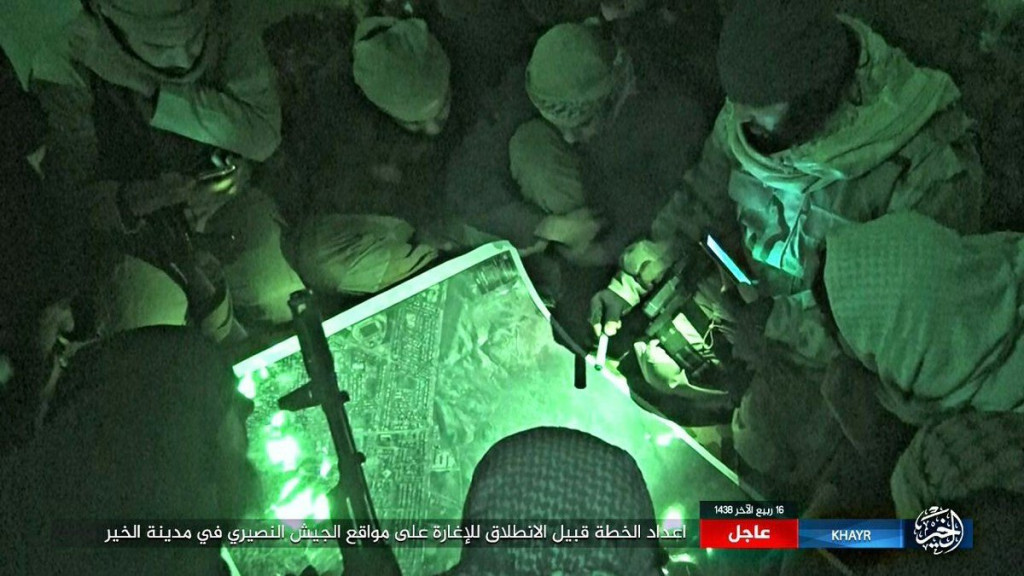 ISIS militants discuss a plan of the Deir Ezzor operation

Government forces have been continuing attempts to repel a major-scale ISIS offensive in the Syrian city of Deir Ezzor.

After failing to take control the Al-Assad Hospital, ISIS changed the direction of attack and achieved a success. ISIS terrorists have seized the al-Maqabis production area and cut off the supply route to the government-held airbase in the city.

Pro-ISIS sources have also claimed that the terrorist group had seized Jiraiya and encircled the Deir Ezzor Airbase. If true, this will put government forces in the area in a difficult situation. 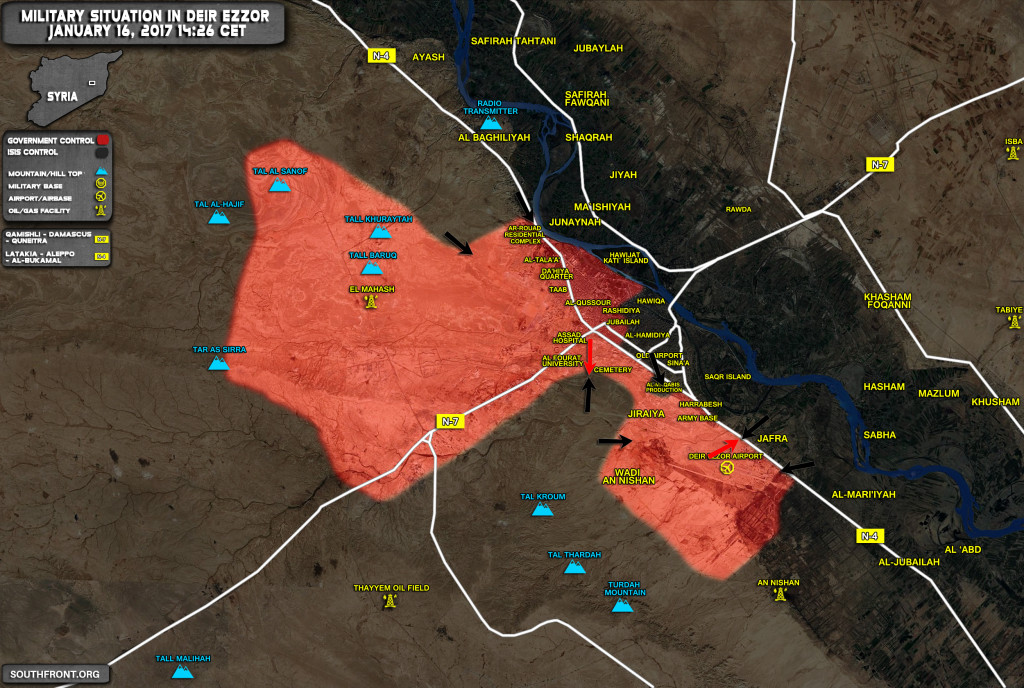 So far, the Syrian Air Force has delivered over 40 airstrikes against ISIS targets in Deir Ezzor. However, it was not enough to stop the terrorist offensive in the area.

A pro-ISIS map shows that the Deir Ezzor Airbase is encircled: 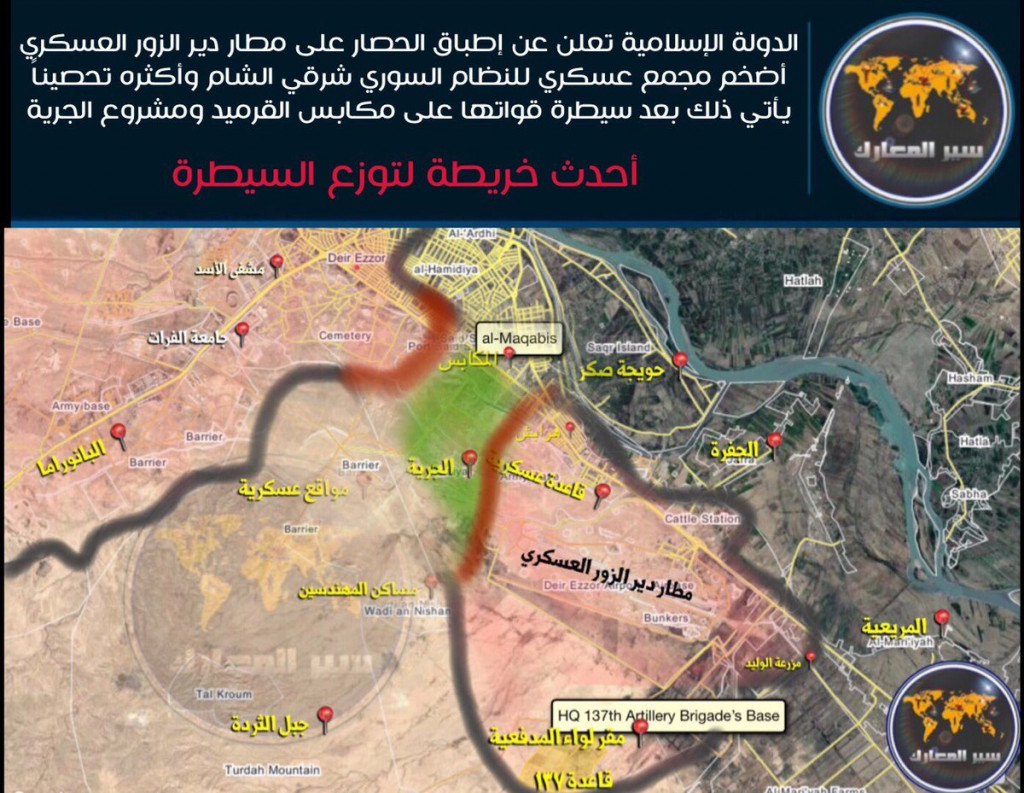 Letting Deir Azzor fall would be the biggest error of the war .

Bomb Ryad with a atomic bomd , kill those

I can only see one way to immediately alleviate the besieged, an intensive air bombing campaign. Think Khe Sanh. As it is, its going to be difficult seeing how close ISIS forces are to the SAA and allies.

In a way this is what you get for ignoring ISIS and the Deir Ezzor front. Similarly like with Palmyra. It may not have been a high priority front like Aleppo, the situation was not something that can and could be sustained indefinitely until the SAA sorted out its other fronts first. After all ISIS is not going to sit on its ass indefinitely either. At some point it would get lucky. As happened with Palmyra, and may now happen with Deir Ezzor.

I suspect the Syrian government wants to defeat the other rebels first, because ISIS alone cannot survive for long. If Assad can focus 100% on ISIS, they are finished.

Also, Deir Ezzor is the only major population center in the east. Palmyra is a small desert oasis, and the east is basically just empty desert.

Best to clear up various rebel pockets and then redeploy.

SAA should learn from Iraqi Forces how to encircle the city ( Mosul ) according Mosul map : http://isis.liveuamap.com/en/2017/16-january-iraqi-forces-liberate-aljamasa-neighborhood-in i make an analysis ( arrow ) with mosul map : https://uploads.disquscdn.com/images/8d81379a76a4498f2199a9e49cdda8305943b740c6e31bbbbc104c47a62f2e08.png By this map, if we see the latest situation in Deir ez Zor,seems like ISIS will capture the Governorate

Yeah, and now all of the IS fighters that left the Mosul area are now in Syria taking Palmyra and attacking Deir Ezzor. The Anglo-American Empire and its client states are going to make sure that the SAA and its allies are going to have to play “whack a mole” trying to defeat IS.

in a sense, its going to be easier, poilitically talking, to destroy ISIS rather than the “moderate” revolutionaries. ISIS appears to be currently the only “rebel” force able to act offensively against the syrian state. The anglo-zionists will not be able to support ISIS as much as they did with al-nusra, al-sham and so on, and in four days Trump will take office. The ragheads lost the capability to make Syria a sunni sharia-state when Russia intervened on Assad side. Their “fallback” objective may be the old “sunnistan” country theorized by saudis and some US senators, a sharia state placed between Syria and Irak taking territory from both the countries. Yet, without some support from the west (read: the US), they are not capable of sustaining that idea politically. Both Russia and Iran could be stepping up their operations in the area on one side, while the US and west evict ISIS from Irak. Of course predictions are kind of difficult: Saudi corruption is rampant in the US congress, and even with Turmp in office he could not be strong enough to go to war with wahabism without any more limits.

Stage 1 the attack by NATO “by accident ” was part of the plan to give a beter departure point for ISIS / NATO Stage 2 the battle of palmyra was to increase the distance between the units of the SAA ( no resgue mission possible ) Stage 3 the final assault could not be a succes without the intelligente support of the west / saudies We are on the point of a world war if Russia retaliates for this assault , 4 days more can the Hero’s of the SAA hold that long !

What does 4 days have to do with anything? Trump’s inauguration won’t help…

John Whitehot
Reply to  The Bandalar

It’s almost sure that his administration will be much less supportive of jihadism. With Obama the support to saudi quest for dominance over the arab world was at an unprecedented point. Trump is clearly shifting the “foreign menace” device (always present in US politics) back to jihadism, when Obama has invested all his political weight in designing Russia as the enemy. What I mean basically is, that ISIS and the wahabists are not going to be stronger with Trump in power, much likely they’ll be weaker

The Bandalar
Reply to  Barbarossa296

Whack-a-mole against a force occupying a desert oasis, a handful of villages and a single, moderately sized city? Don’t think so. Once ISIS has lost it’s Iraqi territories they have no population centers or resources to draw on.

Much easier to fight an enemy in the eastern deserts than the western urban centers.

The Bandalar
Reply to  Akm

What we are seeing is beginning of the partition of Syria. The sunni triangle or “sunnistan” discussed in us state department memorandum in 2012 mentioned Deir Ezzor as a target area for jehadist ambitions. For Deir Ezzor to fall represents the acquiesce of Russia and even Assad to those plans.

Didn’t the Russian mod contemplate dropping some experimental robots on enemy territory? If that intersection to the east were tied up a few days… But then again it was a Russian pundit, not the mod. You couldn’t risk using them on civilians anyway.

DeirezZor is in a difficult position.

Airpower alone will not save the city.

Boots on the ground will not, in itself, save this city, mot isolated as it is.

SDF forces are nearby, less then 25 miles. They do not have an incentive to intervene as Assad continue his rethorics against them.

Maybe it is time to have a resolution of outstanding issues between Assad and SDF so as to incentivize the SDF to intervene.

Turkey and Israel difinately give weapons to ISIS.It is impossible for ISIS to drive a long way to Saudi Arabia to get the new fire arms.Nato supply line is open from Hasaka.