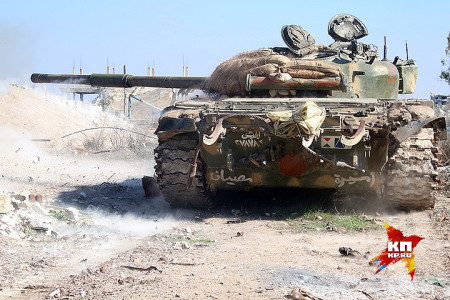 ISIS militants cut Aleppo’s “road of life” which connects the city to the rest of Syria. But they couldn’t hold it.

We’ve gotten used to, and even got to like, the road to Aleppo. It’s a straight, smooth road from Homs to Salamiya which bypasses islamist-held territory. Then another 100km or so down the modern highway connecting Homs and Raqqa through the 10km-wide corridor between al-Nusra and ISIS. Then at the border of ISIS-held territory, an unnoticeable turn toward the desert. And then another 100km on a winding road through Hanaser and Rasm an-Nafal into Aleppo. All of that within the “scenic” 10km safety corridor. Which in reality is dotted with numerous checkpoints and fortified positions on all the hilltops along the road. In the flat desert, such fortifications consist of tall berms formed by bulldozers. The end result resembles a man-made water reservoir. Except instead of water there is a dozen tents, a few BMPs with guns pointing toward all points of the compass, a water barrel, and a radio antenna. However, there are points between the fortified positions through which, given proper reconnaissance and coordination, one can slip through in a couple of fast pick-ups with machine-guns.

On Monday morning we began to traverse that remarkable route for the fifth time, but as we were reaching the checkpoint after Salamiya, Syrian soldiers stopped us.  I caught the word “mushkelya’–problems–out of their lengthy tirade. Our interpreter confirmed our linguistic guesses. On the night of February 22, the Islamic State militants attacked Hanaser and Rasm an-Nafal from two sides and cut the sole, and very thin, artery connecting Aleppo with “mainland Syria.”

A long column of tractor trailers, which haul food, medicine, munitions to the north of the country, was stopped at the checkpoint. Sending all of this by air would take too much fuel, and there aren’t sufficient aircraft available. Especially under conditions of constant fighting.

A dust-camouflaged pick-up approaches the checkpoint from the other direction. We ask whether the road is clear. “Not a single car”–they laugh. And they add, this time seriously–can’t go right now, the militants fired on vehicles moving past Asriya, there are wounded. There is fighting in Hanaser which straddles the road.

After a few hours, it became clear that the ISIS sortie could not be called a counterattack. They were simply trying to establish a position on the road in order to cut Syrian forces’ supply route. These forces are pressing against ISIS core territory–Raqqa province, from the South and the West. The Islamists were trying to slow down the offensive in order to buy time for regrouping. However, after lunch and with active Russian air support, Syrian forces reestablished control over the “road of life.” But they were not in a hurry to reopen it–the desert portion turned out to be heavily mined. Some of the terrorists consolidated themselves in northern part of Hanaser from where they can hold the road under fir. Syrian army sources told us the military intends to fully clear Islamists out of the area and defuse all the mines by Tuesday.

Moreover, offensive operations continued on nearly all fronts of the Syrian war.

Units of the 103rd Special Operations Brigade and militiamen took the last three villages and three hilltops in Latakia’s north without too much trouble. The militants withdrew toward the border with Turkey or into Idlib province. Now the government forces, following a redeployment, will be able to focus on clearing Idlib province. Experts believe that each such victory frees up Syrian Army resources–equipment and units which can be redeployed in order to increase pressure against other sectors of the front.

This historic monument of international importance was captured by ISIS in May 2015. The terrorists immediately started to demolish architectural monuments, calling it a battle against idolatry and paganism. While engaging in vandalism, the militants established an all-round defense which the Syrian army is once again trying to break. The earlier, January, attack bogged down after liberating a few kilometers of desert.

Since them, the Central Group of Syrian forces spent a month concentrating howitzer and rocket artillery, bringing up munitions stockpiles, and identifying targets. Officially, the front line on this sector has been “stabilized”, the operation was kept a secret. As of right now, no impressive successes to report yet. ISIS defense is being crushed using artillery and aircraft.

Last Sunday, there were heavy explosions in Syria’s largest cities. They cost 177 lives, with hundreds more wounded. In Damascus, the terrorists once again struck the Seida-Zeinab region which has a predominantly Shia population. 120 people died there. In Homs, two truck bombs blew up in an Alawite and Christian quarter, next to a bus stop and a university. 57 died, more than 100 were wounded. Unable to resist government forces on the battlefield, the terrorists struck civilian population.

On the same day, Syrian forces fighting near Homs were visited by a Ministry of Defense commission. It declared operations on this sector unsatisfactory, the units received troop and equipment reinforcements, and one can assume that the army in Homs will also start moving forward. Greater activity is also expected in Damascus suburbs. The hysterical attacks against civilians were driven only by these recent developments. By any objective measure, the militants will not be able to hold the front line against an all-out attack by the entire Syrian army. The army simply won’t allow them to maneuver their forces from sector to sector. It simply defies logic to think that killing 100 students and city dwellers will stop the offensive.

We haven’t discussed combat operations in Syria’s southern regions, where the militants have been pressed against the border and cut off from supply. Fighting continues in Kurd-populated provinces. The overall picture is quite simple–the Syrian army is active, attacking on nearly all sectors of the front, its capabilities and fighting spirit have not been exhausted yet, which means we will continue to hope for good news.