According to one of the Iraqi commanders, this spring the Mosul city will be completely liberated from terrorists of the Islamic State group. 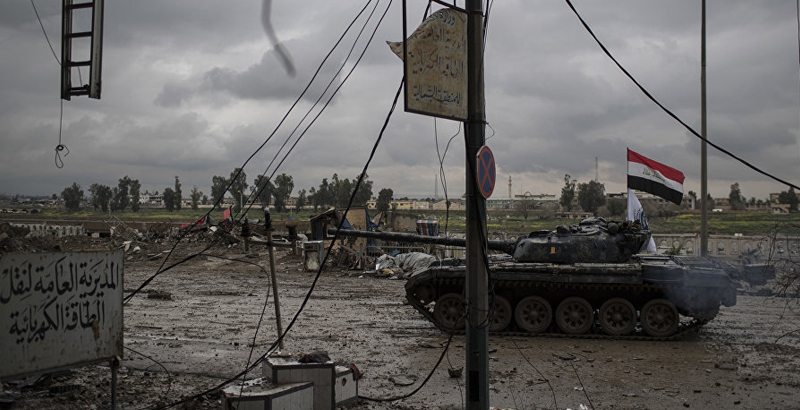 A tank of the Iraqi federal police in Mosul (Photo: AP / Felipe Dana)

Terrorists of the Islamic State (IS) group control less than 30 percent of the territory of the western part of Mosul city, the RIA Novosti news agency reported, citing one of the commanders of the Iraqi federal police, Brigadier General Shaker al-Khawaji.

“The ISIS currently controls from 25 to 30 percent of the territory of western Mosul. We continue to liberate new neighborhoods,” Shaker al-Khawaji, the commander of the 18th Regiment of the 5th Division of the Iraqi federal police, whose units are on the contact line with terrorists, said.

He also added that the Iraqi security forces intend to exhaust the IS terrorists’ reserve ammunition, as well as to deprive of their capability to resist before to start liberate the territories of the Old City area in Mosul.

“The federal police have not yet entered the area of the Old City. We plan to do this when the IS exhausts its reserve ammunition, its capability to resist, until all the supply routes are blocked, until each of them is eliminated or until they all blow up themselves,” Shaker al-Khawaji said.

According to the Brigadier General, the Iraqi city of Mosul will be liberated from IS terrorists until the end of this spring.

“The liberation of Mosul will take other weeks. This spring you will hear these news,” he said.

The Iraqi commander noted that there are about 1,000-1,500 militants on the territories, which are under the control of terrorists.

Shooting wars expend a lot of ammunition. ISIS must be using less full-auto to conserve their dwindling stock of bullets.

I am amazed at the ability of ISIS to hold such a long front for as long as they have, then again it could be the never changing incompetence of the Iraqi military.