The Islamic State terrorist group has denied any casualties in the US airstrike, carried out with the “mother of all bombs.” 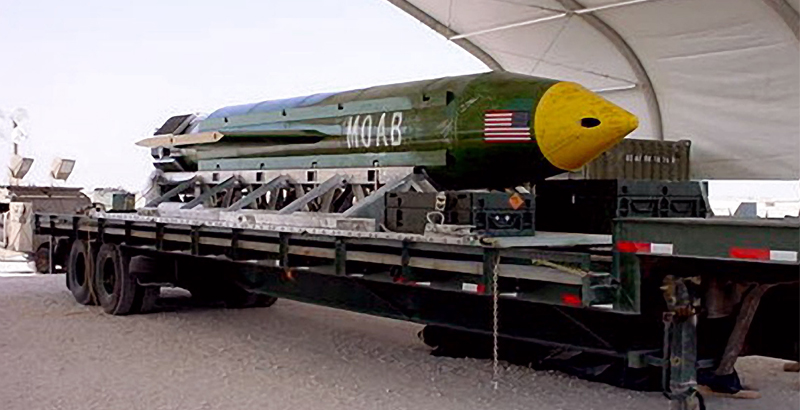 The GBU-43/B Massive Ordnance Air Blast (MOAB), also known as the ‘mother of all bombs’ (Photo: Eglin Air Force Base)

The Islamic State (IS) terrorist group has denied the information that it suffered losses during a US strike, carried out with the largest non-nuclear bomb known as the “mother of all bombs,” the SITE organization, which monitors information activity of terrorists, reported.

On April 13, the US dropped its largest non-nuclear bomb, the GBU-43/B Massive Ordnance Air Blast (MOAB), on positions of IS terrorists in Afghanistan. The White House explained that the strike’s target was a system of tunnels, which was used by militants. This was the first combat use of a bomb of this type.

On Friday, the Afghan Defense Ministry reported that 36 IS terrorists were killed in the attack. According to the department, the strike was carried out on a village in the Mamund valley, where militants used a cave system as a defense building. Reportedly, a large hideout with weapons was also destroyed in the attack. Nobody of civilians was injured.

Later, the Pentagon published a video of the airstrike on its official Twitter page. The footage allows seeing how the bomb falls, then an explosion occurs and large clouds of smoke rise.

In addition, the US Air Force also published online a video of the first GBU-43/B’s test, conducted in 2003.

US President Donald Trump called the attack a “very, very successful mission,” noting that he personally gave an order for the strike.

Who does one believe ? Both the US and ISIS are proven liars of the 1st degree.

neither – and i doubt this scared anyone, as russia has the FOAB which is four times more powerful reportedly.

awesome and i hope it goes higher lol

https://en.wikipedia.org/wiki/Father_of_All_Bombs If you don’t trust wiki, there are very many other sites with info. Have a great weekend.

there’s the video too where if you compare it to the moab videos, you can see how much bigger and more destructive the blast is. Common knowledge to ppl in the know ….

With all these so-called demonstrations of Force, Trump instead of getting Respect for US will get Ridicule. 59 Tomahawk missiles causing minimal damage and supposedly ‘mother of all bombs’ making no effective collateral damage. Terrible!

Just ten days ago Trump was questioned by the MSM “what are you going to do about this “chemical attack”. And now all of this! Talk of potential conflict with N Korea, and rumors of 50K US troops to be sent to Syria, threats of more sanctions against Rusia, etc., etc., etc. Trump and his administration are a bunch of windbags (and a little action) I think. Did he feel threatened by MSM and deep state? Probably yes. Hopefully all of this BS will die down soon. What’s his latest tweet? :)

Fun fact. The very tunnel complex they targeted in Afghanistan was constructed in 1980’s with both US and Saudi state assistance, Bin Laden was from rich Saudi construction company and he freighted in with state aid tunneling and construction equipment from Saudi Arabia to carve out networks of tunnels and entrenchments in Tora-Bora escarpments.

Bin Laden’s family considered him to be an asshole and financially cut him off.

That was some time later when Bin Laden became an uncomfortably noisy family problem sounding off over presence of US troops stationed in Saudi Arabia – infidels in the holy land etc – in lead up to first Gulf War against Iraq. The Saudi construction equipment being used in Afghanistan to build mujahedin bases was long before that in middling 1980’s.

LOL guess that’s why the real deal is the ‘Father’ of all bombs, by yours truly Russia. Mothers just slap and scream, fathers …. they give you the belt and a hiding.

says who? CENTCOM who couldnt make sense about the tomahawks waste that hit 2 old jets and assads’ soldiers’ restaurant on a wide open base LOL? And who were ridiculed all over social media? Fuck off, zionist.