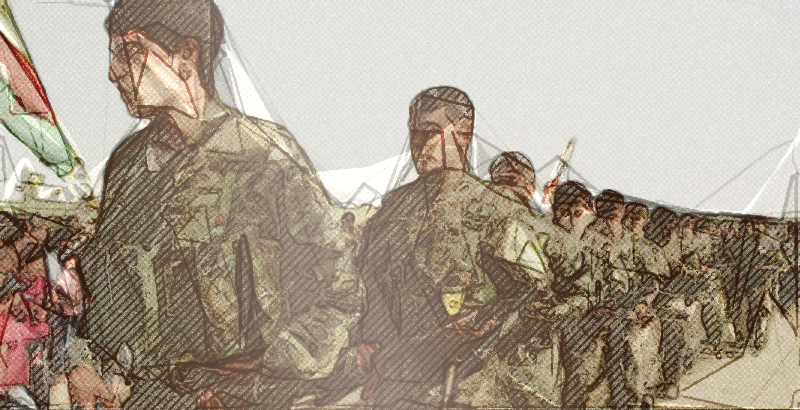 There are “signs” that ISIS leaders are fleeing the ISIS self-proclamed capital in Syria, Raqqah, as US-backed forces are advancing in the countryside of the terrorist stronghold, according to spokesman for the US-led coalition.

“They’ve increased population control measures in Raqqa by seeking to remove or destroy televisions, searching houses for mobile phones and satellite dishes in order to maintain control of news and access to information about their losses,” Colonel John Dorrian added commenting on the issue.

Dorrian said that since February 4, the so-called “Syrian Democratic Forces” have liberated 800 square kilometers and more than 100 villages in the province of Raqqah.

“These are not the actions of an enemy who feel they’re winning, and that’s because they’re not. We’re seeing reflections of pessimism among mid-level commanders and this world view is spreading to the rank-and-file fighters,” he said.

hahaha baked forces. Is it a gingerbread army, or are they getting high?

Captagon, an amphetamine with euphoric properties has definitely been used by the FSA and most likely by ISIS since it is popular in Saudi Arabia … https://www.washingtonpost.com/news/worldviews/wp/2015/11/19/the-tiny-pill-fueling-syrias-war-and-turning-fighters-into-super-human-soldiers/

Should we count Ghat which is chewed by the Houthis which is another Amphetamine? Technically yes, but since they are chewing it from a plant source I don’t think that it has nearly the same potency.

I’m kind of skeptical of ISIS fleeing Raqqa, where are they going to go? It seems more like they are hardening the place for a siege.

Especially since McCain popped into Saudi, Turkey and Syria, just a few days ago?

This is war, if drugs help you kill the enemy, use them. No time for armchair moralists sitting in safe countries.

Drugs didn’t help the Nazis win their war, it doesn’t help ISIS either. It only seems to help turn otherwise normal people into psychotic killers. You don’t win wars with psychotic killers, it might give you an edge, but wars are won through good tactics, strategy and logistics.

Of course it helped nazis their soldiers could be kept awake for extra hours, when needed.

Funny, last time I checked they still lost the war. In fact it was one of the worst and most total complete military defeats in history ever. Ergo, in the grand scheme of things good tactics, strategy and logistics matter more then drug induced cruelty and a few hours of extra sleep. The drugs may have given ISIS an edge in battle, but as they lacked a proper strategy and logistics, it’s not doing them much good right now. Just like the Nazis.

Also, do we really want to wage wars using soldiers who are turned into psychotics due to drug abuse? After all, all wars come to an end and do we really want this soldiers turned psychos to go back to civilian life? We already have shitloads of problems with veterans suffering from PTSD, do we want psychotic drug addiction added to that mix?

Many are using drugs now and then.

Kiev also used that on the people of Eastern Ukraine. Funny, John McCain, also does a lot of business in Ukraine with the NAZIs as well as his Al Qaeda (or whatever they are called today) in Syria.

Fleeing to where?! HaHa Daeshbags, this is the capitol of your glorious caliphate. Will you jump into boat and hide on the south side of river. Don’t let the bombers find you there (less places to hide). Jump into your cave and hope for the best. LOL

Maybe back to the CIA?

If You cant find Yout menthal hospital, try a taxi.

So you do not think factions within the CIA have been instrumental in organizing the destruction of Syria? http://www.zerohedge.com/news/2015-05-23/secret-pentagon-report-reveals-us-created-isis-tool-overthrow-syrias-president-assad

Baath party and Assads has.

Running out of places to hide. Too bad, so sad. I hope your CIA handlers are bombed by the U.S. Air Force. A cruel, but very just end to the bastards that created such a vile and Hellish group.

Where are they running to?

Just because US says “reports that ISIS leaders fleeing Raqqa” doesn’t mean jack, US constantly lies, lost count of times US claimed Colonel Qadhaafi had “fled Libya disguised as a woman” or that “senior Al-Qaeda leader killed in Airstrike ” turned out false. Why would ISIS flee their last stronghold ? Where to ?

Typical one eyed remark – You just have to declare (I dont know from which end of Your body), that US my here and there.

And the rest of the world are not ?

No wonder parts of M.E. remain at low levels in so many matters. Might be jews even wrote the Khoran to keep people down and as an extra learned to prefare non usefull economic systems.