According to Iraqi sources, a number of ISIS commanders and fighters have committed suicide by blowing up their explosive belts in the Old Mosul area in order to prevent the Iraqi Army from capturing them.

VIDEO#ISIS commanders committing suicide by blowing themselves up on Live TV in #Mosul Old City after they were completely surrounded. pic.twitter.com/9cDb2EsYDq

From its side, Iraqi forces have continued securing the right part of Old Mosul. Iraqi forces have killed a large number of ISIS snipers and commanders, including the Saudi national commander Abu Hafsa, the adviser of al-Baghdadi Ayed al-Jumaili and the ISIS governor of Ninawa Province, Abu Ahmad al-Iraqi.

Separately, Iraqi forces have deployed a defensive line on the eastern bank of the Tigris River to prevent any ISIS fighters from escaping to the left side of Mosul City.

Iraqi sources announced that the Iraqi Army has finally evacuated most of the civilians from Old Mosul and that all the remaining women or men are fighters and members of ISIS terrorist organization.

From its side, the ISIS-linked News Agency Amaq said that all the remaining fighters in Old Mosul have given “pledge of allegiance until death” to the Caliphate.

ISIS appears to be encouraging its fighters in Mosul to commit suicide so that they are not caught and provide the Iraqi security forces with sensitive information.

The Iraqi Joint Operations Room announced that the Federal Police achieved all their goals in Mosul City. Iraqi forces are now searching homes for the remaining ISIS snipers and commanders to capture or kill them. And the operations to secure the city are expected to end in the coming hours.

You know western intel has thrown in the towel when they start encouraging their pawns to kill themselves rather than risking the pawns rating them out. I could care less about anything from a head-chopper operational perspective other than “Who was your CIA handler and how much did they pay you?”

lack of CAPTAGON makes them babbling fools.. they must have enough

Managing director of Google says we are paying $97 per hour! Work for few hours and have longer with friends & family^hp55d:
On tuesday I got a great new Mitsubishi i-MiEV from having earned $8752 this last four weeks.. Its the most-financialy rewarding I’ve had.. It sounds unbelievable but you wont forgive yourself if you don’t check it.Then start by visiting this link
~xg55d:
➽➽
➽➽;➽➽ http://GoogleFinancialJobsCash345BuzzSpring/GetPay$97/Hour… ★★✫★★✫★★✫★★✫★★✫★★✫★★✫★★✫★★✫★★✫★★✫★★✫★★✫★★✫★★✫★★✫★★✫★★:::::~xg55o……

I kind of know how they feel. I’m pretty cranky and utterly worthless in the morning until I’ve had my first bowl of Captagon. After that, I’m ready to roll.

Yeah, who says they put those vests on themselves or were the ones to detonate them?

They might actually be doing this voluntarily. They’re all pretty well brainwashed. Part of the ISIS training is to watch four consecutive hours of CNN after morning prayers. Who wouldn’t want to blow themselves up after that?

“Iraqi sources announced that the Iraqi Army has finally evacuated most of the civilians from Old Mosul and that all the remaining women or men are fighters and members of ISIS terrorist organization.”

Also, remember this. Hopefully some serious retribution will follow the victory of the Iraqi army, not doing so will only result in more problems later on.

That is what the US really fears, I agree.

Committing suicide to avoid being brutally (and perhaps rightfully) tortured to death. :P

So much for the “Warriors and followers of Allah”.

May Allah punish thesr people for their heinous crimes!

I recall hearing that ‘using your body as a weapon’ is not considered suicide. So as long as they are attempting to kill infidels in the process, they get their virgins.

Big problem: the virgins are running out. Maybe they will have to start using second-hand virgins.

That’s not even exist in Quran or hadits, they were duped by false statement from fake Imams( the one is Shimon Elliot aka Al Baghdadi).

can the followers of Allah just stop killing each other for the west ,stop being used wake up

Islamic State “hara-kiri” has come to Iraq. Good news. No mercy for these butchers.

GREAT NEWS !
Mosul has been a long and difficult struggle for Iraqi forces.
Surely a monument will go up in the city for the many brave who have fallen against ISUS. 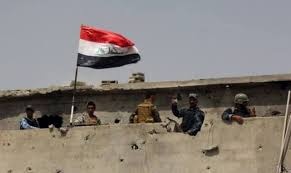 So where are the bodies for proper identification? Kind of obvious what is going on.