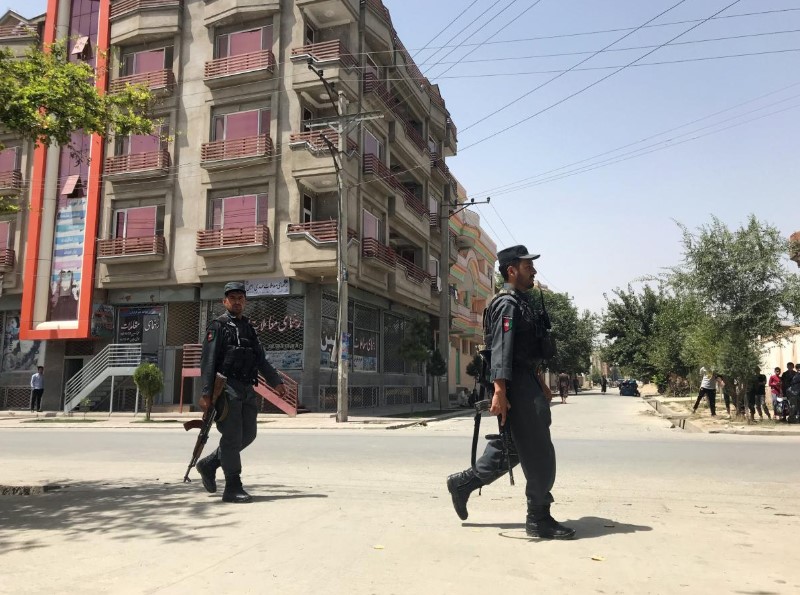 Afghan policemen arrive at the site of an attack in Kabul, Afghanistan August 16, 2018. REUTERS/Mohammad Ismail

ISIS has officially claimed responsibility for the recent rocket attack on the Presidential Palace in the Afghan capital, Kabul.

The attack took place in the morning of July 20, during prayers for the Muslim festival of Eid al-Adha. President Ashraf Ghani and other Afghan officials were praying at an outdoor gathering when three rockets landed in Bagh-e-Ali Mardan and Chaman-e-Hozori areas in Kabul’s District 1 and Manabe Bashari area in District 2, all located near the Presidential Palace. No casualties were reported.

Video by national TV shows the moment rockets landed near the Presidential Palace during Eid prayers this morning. pic.twitter.com/WmEniyfLfM

The rockets were fired from an improvised launcher hidden in the trunk of a Toyota Corolla car that was parked by ISIS terrorists in the Parwan-e-Se area in Kabul’s District 18.

Yup. Improvised rocket launcher with 7 tubes. I can already guess who will take a credit #Kabul #Afghanistan pic.twitter.com/O0nROUhsNk

The rocket attack came as the US is withdrawing what’s left of its troops from Afghanistan. The Taliban has been also advancing on several frontlines, further destabilizing the already fragile situation in the country.

ISIS is poised to benefit from the recent raise of violence between the Afghan government and the Taliban. The lack of progress in the intra-Afghan peace process has been playing in favor of the terrorist group.

Your atheist dayzz are numbered

Either they knew, that this rockets were coming in and will not hit them, or they are true in faith. Depends on what the Taliban think if it will help them in the negotiations.

Kabul needs the Taliban to defeat ISIS cause the Army cant.

ISIS ,DAESH,AL QAIDA are all zio Christian west created terrorist outfits And from the video of prayers in progress and rocket attack most important observations were all the congregation in the prayers did not react only one This says a lot ie it was a set up GHANI and his gang had prior knowledge of this rocket attack

S Balu, hahaha, you are delusional.. the so called democratic government forces and their chiefs are created and supported by the west. Wether it’s in Afghanistan, Iraq, Syria, Libya, Mali or Somalia. These jihadis groups are fighting to liberate the lands, and to implent Sharia law. In many countries they are standing up against these corrupt western made governments and they have every right to do so!