On April 30, a service member of the Syrian intelligence was assassinated by ISIS cells in the southern governorate of Daraa.

The terrorist group said in a statement published by its news agency, Amaq, that its fighters had shot and killed the service member in the town of Kafar Nasej in Daraa’s northern countryside. Amaq also shared a photo of the service member’s dead body. However, SouthFront decided to not share the graphic content.

Local sources in Daraa confirmed that ISIS cells assassinated Issa al-Jbawi, a native of the region serving in the ranks of the Military Intelligence Directorate (MID). 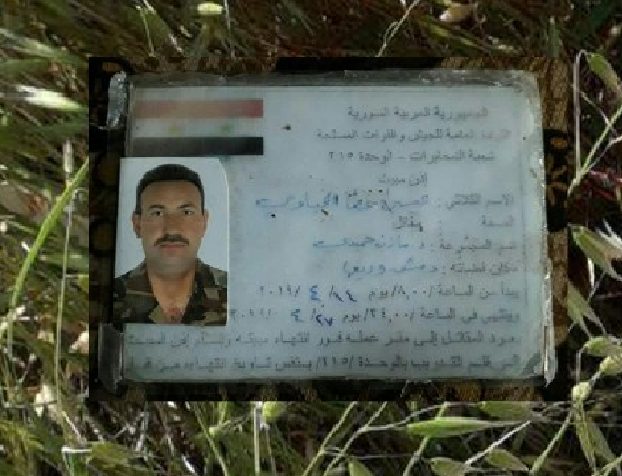 The military ID of Issa al-Jbawi as shared by Amaq. Click to see full-size image.

This was the second attack by ISIS cells on Syrian intelligence personnel in Daraa this week. On April 29, the group’s fighters shot an MID service member in the eastern countryside. However, he survived the attack.

The Syrian Arab Army (SAA) and security forces are yet to take any action against ISIS cells in Daraa. This could encourage the terrorist group to carry out even larger attacks.

AGAIN COME ON NOW..saa do something……

The incredible rubber ISIS. For anything in Daraa, read Israel. For some reason (known only to Israel) they are conducting a low-intensity war on Syria.

the latest victims for weeks now, are all in the MID.

These assasination operations are INTELLIGENCE operations.

ISIS…Nothing could be further from the truth.

it is the work of the zionists.

the Intelligence for These operations (killing MID officers by ambush) can only come from 1 source.From 1 source only.A source that is close to SYRIAN INTELLIGENCE…..and has the power and resources…….

that is the work of treacherous Zionist pig Putin and his circle.

And the Intelligence is passed on to their masters in Israel.

“According to the Syrian Arab News Agency (SANA), Syrian air defense systems have intercepted several rockets launched by Israel over Palmyra,” the publication began, alluding to the Israeli airstrikes on April 21.

The Sina report claims that since the Syrian air defense units began using the Chinese radar, in particular, the JY-27, they have experienced positive results in the field. “But due to the fact that the Syrian air defense system uses radars made in China, there are results. Syria previously received a number of Chinese-made radars, including at least the JY-27 long-range radar,- reports with reference to sources in the Syrian army,” they said.

Are you sure this is an article from SANA you’re referring to, I didn’t remember it so I did a check and couldn’t find the one you quoted from, perhaps you have the wrong date because this is the only article on SANA I can find for the date you gave.

“Homs, SANA-Air defenses of the Syrian Arab Army confronted on Monday an Israeli aggression over Palmyra and shot down a number of the hostile missiles.

SANA reporter said that at nearly 11 p.m., the army air defenses confronted an Israeli missile aggression over Palmyra, East of Homs, and shot down a number of the hostile missiles before reaching their targets.

On March 31st, The army air defenses intercepted an Israeli missile aggression over Homs and destroyed most of them before reaching their targets.”

The quotes you provided don’t sound like anything I’ve ever read in SANA before, I wonder if perhaps you’ve made a mistake about which source it came from, it’s easy to do, I know from my own past experience. So if you have a link to the source I’d love to read it in full, and I don’t mind if you’ve made a mistake and it’s not from SANA, you have my curiosity going now and I’d love to see what the article has to say in it’s entirety, so thanks if you can.

He’s an ex Baathist which means he’s totally loyal to Assad and Syria, so this is a real blow for the government side, and it’s becoming obvious to me a tit for tat assassination strategy is evolving in Darra and Quneitra. But who killed him, was it Isis or was it the opposition ex FSA, or was it someone else, if it was someone else we’re in for a bloodbath.