A convoy of the Kurdish-led Syrian Democratic Force (SDF) was ambushed late on December 7 by ISIS terrorists in the southeastern Deir Ezzor countryside.

The Syrian Observatory for Human Rights (SOHR) reported that two terrorists on a motorcycle targeted the convoy as it was passing near the town of Hajin. Three fighters of the SDF were killed and three others were injured.

“The area [Hajin] is witnessing a security alert and an intense deployment of SDF personnel, who imposed a curfew,” the UK-based monitoring group’s report reads.

The new attack came amid a series of “anti-terrorist” operations by the SDF and the U.S.-led coalition. Most of these operations took place in Deir Ezzor’s southeastern countryside. 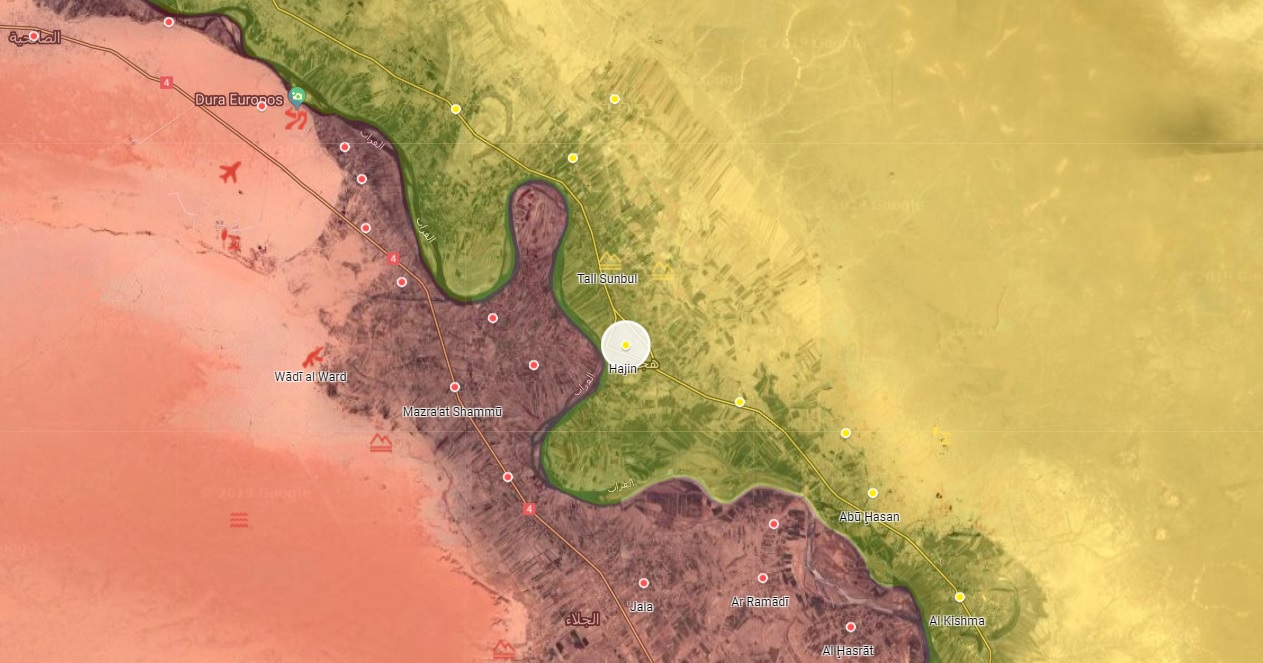 Few hours after the attack, a joint force of the SDF and the U.S.-led coalition raided the town of al-Shheell, north of Hajin, and arrested two men. It’s still unclear if the men were linked to the attack on the SDF convoy.

ISIS cells in northeast Syria, especially in Deir Ezzor, intensified their operations last October taking advantage of the Turkish-led attack on the region.

I don’t know how many times he announced this.

Maybee You should learn to count to 5 if its not too overwhelming. Its 2 or one only.

The Eufrat borders are highly connected by ISIS there. You should ask Your Master to coordinate with SDF and USA about it unless You need smugglers oil by them very much too.

Most Shammers and semi ISIS are friends of none.

Many others are and they are as a terrotory. All normal people can understand that and an afterclening for years is needed.

Several others included several Russians said so long time before Trump. At that time Trump not even knew, there was something named Syria.

Just routine evel bias talk by You. Do You have one leg only too?

Jens Holm beat me to it.

Eehmm perhaps those are New Ones? The Old ones made good Dog-Chow & Fertilizer

AM Hants
Reply to  Hasbara Hunter

International Secret Intelligence Service and just check out how many NATO members states fund and support them. You never see them taking their fight to Saudi or Israel, just nations with no Rothschild Central Banks of Rothschild Debt. Strange that or is it?

Hasbara Hunter
Reply to  AM Hants

I know that we the Dutch Tax-Payers spent at least €80.000.000 on Brand New Toyota Hiluxes, Night Vision Goggles & Other Big Boys Toys…That is without all the extra costs of sending F-16 Fighter Jets to Bomb Civilians…In the meantime the Dutch Government is cutting Pensions & the number of homeless folks has doubled in One Year

AM Hants
Reply to  Hasbara Hunter

Our Government, whatever party is in power, also heavily finances the International Secret Intelligence Services, aka ISIS/White Helmets/Daesh/Al Qaeda or whatever they are called today. Sadly, they have not even asked permission from the tax payer, to see if we want to fund them. Come to that, they have not even declared war in any of the nations that we send the Rothschild Terrorists to. Each year, the only section of the budget, to get an increase in funding, is the Foreign Aid section, via the UK Foreign and Commonwealth Office, which funnily enough is very loyal to the desires of Israel. Just no party puts that in their election manifesto.

Why would a grieving widow, with two young sons, who was sacked from his charity job, owing to a certain type of misconduct, decide it would be a good idea for a charity set up in his wife’s memory to fund terrorists? With donations being handed over, within a couple of months of his wife’s death?

How many connected to politics, and international charities end up attracting attention owing to their lifestyle choices, as Clinton Foundation and Haiti Aid so comes to mind. Not forgetting the children of Haiti and what happened to them, after the Clintons and friends turned up?

That was only our nomad ISIS we abandoned in the desert. Our reserve ISIS living inside Kurd concentration camps – the ones we evacuated to Iraq – are all rested up, retrained, rearmed and on buses to Deir EzZor wired out of their skulls on Captagon. “Snackbar! Let’s go kill some infidels. I’m even buying western smokes and whiskey with my next CENTCOM paycheck. Woooo-hooooo!”