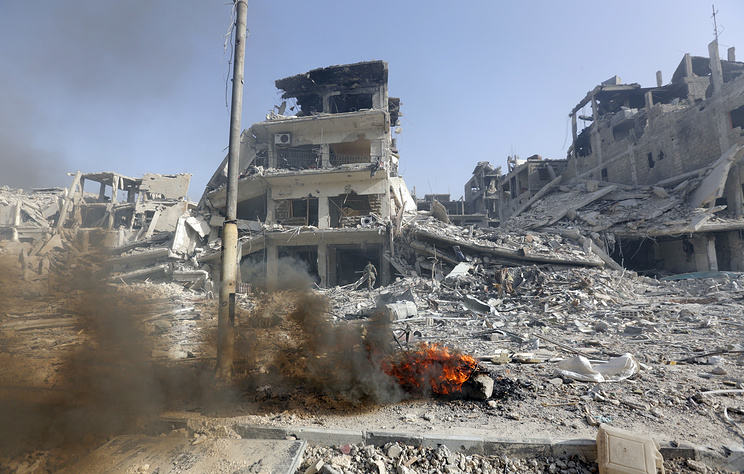 ISIS has taken more than 700 hostages in the Syrian province of Deir Ezzor, among them citizens of Western European and other states, the Russian state-run news agency TASS reported on October 17 citing a military diplomatic source.

“Taking advantage of their impunity, the Islamic State militants carried out an attack on the refugee camp located near the populated locality of al-Bahra on October 13. As a result, they took hostage and transported about 130 Arab families to [the town of] Hajin which is under their control,” TASS quoted the source as saying.

According to the source, “among the ISIS hostages in that area are more than 700 people, including citizens of Western European and other countries.”

ISIS allegedly emands that the Syrian Democratic Forces (SDF) fighting on the side of the US-led coalition release captured ISIS members and concede several territories on the eastern bank of the Euphrates River. ISIS will execute hostage every day until their demands are met, the source added.

The reported noted that ISIS had attacked a refugee camp while the SDF tried to launch an offensive with support from the US-led coalition. The source noted that the reason behind the SDF failute is multiple mistakes made by the US military coordinating the operation.

“Today’s incident in the settlement of Hajin is a good example of that. Because of unprofessional actions of US Air Force, a Kurdish unit that was trying to launch an offensive at ISIS, was subjected to airstrikes from two F-15 fighter jets from the coalition forces. Six Kurdish fighters died, and 15 more sustained serious injuries,” the source added.

According to the source, the offensive was thus disrupted, and ISIS took control of the area. The failure of the operation was exacerbated by mass desertion from the ranks of the SDF, the source added.

Genocide of Syrian people is ongoing on US “protected” part of Syria . By the way because Russia was reluctant to attack illegal US military bases protecting ISIS there.

So…… according to you. Russians should start a war with nato and drag the world into a nuclear scenario, but the FUKUS, who illegally occupy and caused genocides in ME, with their puppet israel there, has absolutely no responsibility of what they causing to happen and are responsible for this.

despite your mastering of the english writing is hard to to cover your subconscious surfacing and what you represent so you know.

Not start war. Just answer properly. 2 missile NATO attacks took place on Syria&Russia coalition without any retaliation or punishment. So Russia is clearly owing response. It is the stupid Lavrov-Putin decision downplay any NATO agression or ignore at all with hope, that it will “deescalate” tensions somehow. But it is not deescalating anything. Hard punch to NATO will deescalate much better. NATO would learn by dead bodies of their troops that playing games with Russia has some real consequences.

According to your limited thinking span and lack of common sense, yes they do. According to actual thinking people, who not only have military training and have participate in many wars against the globalist, but also are fully aware of global realities, the Russians taking them down a piece at the time and the same time stressing the western economy beyond its limits, are doing an excellent job.

Stop showing with every post you making, your holyshit education and your limited capacity. I guess common sense for you it is a luxury you never had. Not all thinking as your handlers and your directive, you receiving from them and try to export here.

Its an ISIS zone. Harde to see any genoside there as well. And if, its done by ISIS.

Thats how it is Kung Fu Flighting.

The US did not “make mistakes” – they are the enemy, and will always stab you in the back.

Americans dont use sheep for transportation.

Just like when they bombed and killed 200 SAA soldiers in DeZ who had the high point overlooking the city of DeZ! This enabled ISIS to take that high point and besiege DeZ and split it from the airport! This angers me a lot because from memory, the isis assault on this hill top was timed perfectly with the bombing! Disgusting actions and tactics!

I would like to know, what that source is. Until that, I hardly will belive a word even it can be true 100%.

I only can confirm, that I am some representative of the non infected kind far away from the world og Yours.

And I certainly can confirm one of Your biggest problems are, You are taken away from the rest of us insisting in being isolated only turning Your bare bottoms to us.

You certainly have a great succes as non devellopment zone apart from the many dead and millions with not even at home. Hip-hip.

the only thing you confirm with every post is your agenda and stupidity, to accuse others for your short comings. Nothing else.

The reported noted that ISIS had attacked a refugee camp while the SDF tried to launch an offensive with support from the US-led coalition. The source noted that the reason behind the SDF failute is multiple mistakes made by the US military coordinating the operation…’

HardHawk
Reply to  AM Hants

No mistakes and there is no isis or sdf. Same shit different name sort of to speak and all they have to do is according to the scenario to change uniforms. This game we give the sickness and we come with the cure have been played countless times never changed and always the civilians fall for it. Talking of the 2 sec maximum thinking span humans who unfortunately are more than 95% of the world population especially in western countries, where they all trained single tasking,employees of the system.

‘…The source noted that the reason behind the SDF failute is multiple mistakes made by the US military coordinating the operation….’ They have been making this sort of ‘mistake’ since the outset – in 2016 they ‘accidentally’ hit Syrian troops in Deir Ezzor, killing 106 and injuring over 100. After this ‘accident’, ISIS immediately attacked the strategic area and took control of it. What a handy result for the Yanks and their coalition cronies! And the MSM promotes the US lies and acts as the West’s propagandists – they are complicit in all of the West’s war crimes. The victims’ blood is on their hands, as well as those of the perps.

Well, it looks like that kurds is doing badly as they have done all the time. Initially, ISIS terrorists were their friends, right ? But now, it looks like there are a group of ISIS that for unknown reason are not very friendly with SDF……hummm, very strange. This looks like all of this were very well prepared a head of time by USA to hurt Siria people.