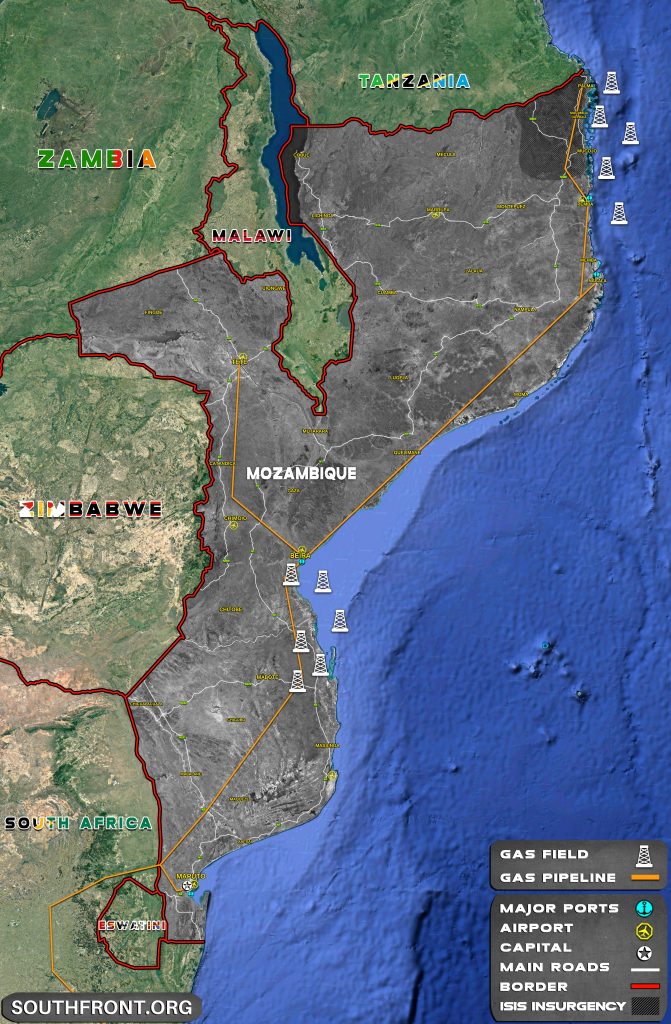 ISIS terrorists have been developing their expansion in Mozambique.

After capturing the port town of Mocimboa de Praia on the Mozambican mainland and inflicting casualties to government forces there, ISIS members seized the islands of Vamizi and Mecungo – where celebrities like Daniel Craig, Bono and Prince Albert of Monaco have holidayed in luxury. ISIS cells are de-facto seeking to establish own mini-caliphate in the southern part of the country.

In the occupied territories, ISIS as usual imposes its own rule, recruits new fighters, declares ‘Sharia law’ (as ISIS sees it) and further. Government forces with support from private military contractors (mainly South African ones) are yet to achieve any breakthrough in the battle against the terrorist group there. The violent posture of government forces towards civilians in the area also contributes to the popularity of ISIS militants among locals.

The authoritarian government must be overthrown and replaced with a new democratically elected Right-Wing government.

Then raise a Christian Army and expel the terrorists !!!

Ban Islamic immigration and then the problem will be solved forever.

Yes, US military’s pet enemies. They’ve gone in ahead of US defence contractors to stir shit up, and set-up shop so US military must invade the to rid the country of this “evil scourge.” Everyone knows the script by now. US military will “destroy” ISIS, then follow the script. Regime change, present “Freedom,” immediately after stealing the gold reserves, and taking control of the resources. The luxury resorts will become pedophile playgrounds of the rich, and criminal. Until Russia eventually loses it’s infinite patience, and takes the initiative in a pre-emptive strike against US Government, and military assets. (this is a tall order to fill) Russia is quite capable, with its allies to end Western madness worldwide. Any self-respecting Prussian General will tell you it’s absurd to wait to be attacked, knowing it’s coming. Those taking the initiative prevail.

ISIS got the message from US/Zionist to occupy oil instalations and then they will enter. Mozambique should ask Russia help for Air attack soon. or ask iran amr advisor Assitance they have experiance how to kill isil whabhi zionst scum

What on earth are you waiting for, AFRICOM? That oil needs some freedomization. Do your fucking JOB!

Why is it that ISIS only attacks Russian and/or Chinese aligned countries?

Pompeo and nato leaders will be thrilled. Such a good place to meet and discuss the genocide of the African people. Because of changes to the climate, Africa is going to become a breadbasket in a world having trouble growing anything substantial. Farm land will be the next driver for warmongering, if it isn’t already.