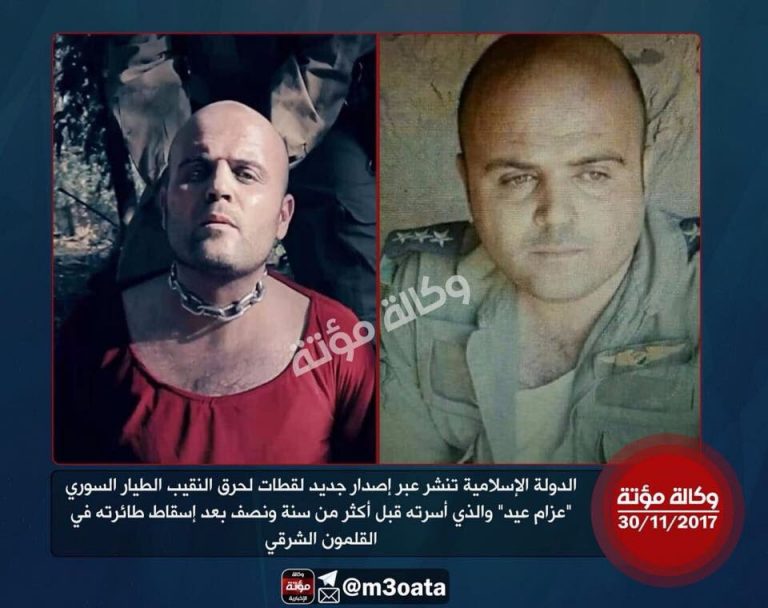 On November 29, the ISIS media agency al-Hayat released a 58-minuate long propaganda video named “Flames of War II”. The video shows ISIS terrorists burning a pilot of the Syrian Arab Air Force (SyAAF) to death after he was chained at the neck.

The SyAAF pilot was identified as Major Azzam Eid, from the city of Salamiyah located in the eastern Hama countryside. Major Eid’s warplane, a Soviet-made MiG-23BN, crashed near Tall al-Dakwah in the eastern Qalamun region on April 22, 2016. Back then, the ISIS-linked news agency Amaq claimed that Major Eid’s warplane was shot down by ISIS fighters and released a video that shows him being captured by ISIS fighters.

Major Eid was not the first pilot burned alive by ISIS. On February 3, 2015, the ISIS media agency al-Furqan  released a propaganda video showing ISIS terrorists burning Jordanian pilot Muath al-Kasasbeh to death. Al-Ksasbeh was captured by ISIS fighters after his warplane crashed near the city of Raqqa on December 24, 2014.

Experts believe that the new propaganda release is a desperate attempt by ISIS to raise the low morale of its supporters, epically after the last ISIS defeats in Syria, Iraq and Egypt. Despite the collapse of ISIS’ self-proclaimed Caliphate in Syria and Iraq, the terrorist group’s media branch is still able to produce high-quality propaganda.

Who is sponsoring HTS today?

Turkey , Saudis, Qatar even the US have all sponsored them at some point in the past. But these countries have grown rifts . So who is backing HTS now?

Turks and Syrians that are making lots of money off the war.

The US regime, to get a pretext for maintening their illegal occupation of North-East Syria, preventing Syria from liberatibg it, and also a pretext for blocking the highway at Al-tTanf

it’s the other way around. it is the Assad, Russia, China, Iran, Yemen, and Lebanon who backs the ISIS. this is to maintain the war-like scenario in the region. with this WAR business of weaponry will be dull. Assad don’t cares syrian civilian because there alawites has money to eat.

That Guy
Reply to  Ernie Gabo

Good joke, but not funny enough. You should work on your humor a little bit.

Ernie Gabo
Reply to  That Guy

that’s not joke! people always debunk the truth and sometimes call it joke! so if you call Israel and America the evil one… then it must be a joke also? right?

That Guy
Reply to  Ernie Gabo

Nope, It was proven based on their actions of not minding their own business, wanting to act like the policemen of the world, and almost always being the ones to start fights with others.

Plus, simply look at who gets attacked by ISIS the most, it is Syria/Iran/Russia, which are the worst enemies of US/Israel, thus this means that ISIS is helping the US/Israel, thus US/Israel are the ones who are benefiting from the presence of ISIS, while Syria/Iran/Russia are getting damaged by their presence, which leads to the conclusion that your comment is based on no knowledge what so ever, and it is utterly stupid AF.

You are even more foolish than Dutch and Solomon and just another example of the ‘Libtarded ‘ cult.

He is Indoctrinated like the rest of them. Ernie alone is Stupid he needs Bernt for his thinking.

Solomon is just trolling for the lulz. Dutch because he has a huge hardon for the Kurds. Solomon at least is funny, Dutch isn’t even trying any more though, just going through the motions.

This guy, not even in their league.

on how and why? where is your explanation? correct me if i’m wrong? if you have no clearer explanation to reverse my claim… your just a dumb moron!

Yes he already did here :D

You are a dickwad, a numbnuts with shit for brains, and you can’t string a sentence together either, your parents bow their heads in shame because of the excrement that pours out of your mouth……………

nonsense! i call you dickshits! imagine your dick dip in a saucy shits before you eat. why i’m telling you this? it’s because you start calling a name without even explaining why i am wrong with my opinion? before you call a name, you better have a good explanation on why you are the right one? instead you just trash talk… blah!blah!blah! it boomerang on you men?

U$ and other pro-ISIS fags in the West must be celebrating!

Google is paying 97$ per hour,with weekly payouts.You can also avail this. On tuesday I got a brand new Land Rover Range Rover from having earned $11752 this last four weeks..with-out any doubt it’s the most-comfortable job I have ever done .. It Sounds unbelievable but you wont forgive yourself if you don’t check it fd177: ➽➽ ➽➽;➽➽ http://GoogleDailyNewsSocialUpdateWorkFromHome/find/jobs… ★✫★★✫★✫★★✫★✫★★✫★✫★★✫★✫★★✫★✫★★✫★✫★★✫★✫★★✫★✫★★✫★✫★★✫★✫:::::fd177h

Hope they get those responsable.

Commenters trying to use this for weird comments or conspiracy theories are almost as disgusting.

They ought to expect no mercy.

I am bookmarking this post for those who claim that Assad isn’t fighting ISIS.

This story will not get picked up on FOX, CNN, or the New York Post, they only pick up ridiculous stories. Speaking of which FOX was yucking it up claiming that Assad was hosting an ISIS rehab program which was also cited on the post https://nypost.com/2017/11/14/syria-is-sending-isis-militants-to-terrorist-rehab/ this story just didn’t feel right. Sure enough reuters posted a more detailed story showing that the class was actually being held in rebel territory in N. Syria https://www.reuters.com/article/us-mideast-crisis-syria-jihadists/turkey-backed-rebels-in-syria-put-is-jihadists-through-rehab-idUSKBN1DS1NM Note, they are wearing the same outfits.

absolutely despicable, how can someone do such a thing to another human, i hope their deaths are as slow and obscene.

Yes, do more deals with terrorists. Make more evatuation plans, and so on.

Watch the video in here