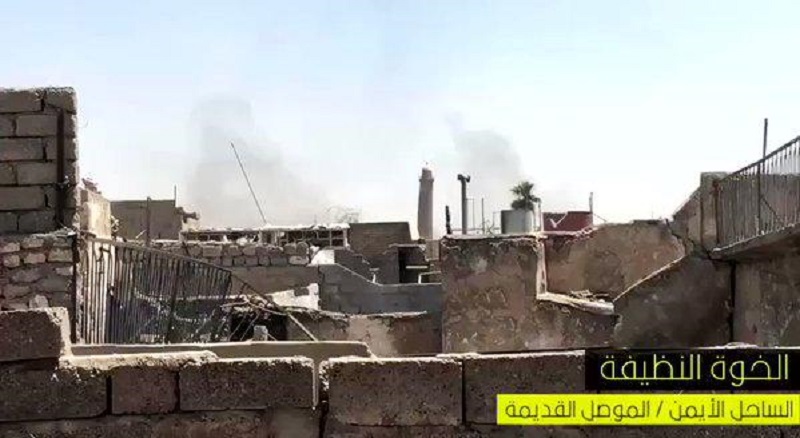 A look at the Al-Nuri Kabir Mosque before its destruction.

Few moments ago, ISIS terrorists reportedly blew up the Al-Nuri Kabir Mosque in the Old Mosul area in western Mosul.

Al-Nuri Kabir Mosque is located in the center of Old Mosul, the last remaining ISIS stronghold in the Iraqi city.

The Al-Nuri Kabir Mosque was the place where ISIS Leader Abu Bakr al-Baghdadi proclaimed a ‘Caliphate’ in 2014.

This is a clear indication of the collapse of the terrorist group in Mosul.

In turn, ISIS claims that a US airstrike destroyed the mosque.

What the fuck is wrong with these idiots.

They are Wahhabi mercenaries they don’t care , they get paid to do this by their supporters who do want this wanton destruction .Trying to force Syrian Government into a major humanitarian crisis and step and do what they did in the former Yugoslavia , everybody knows that’s a mess we won’t be able to leave .

They have been infected with the national hysteria of the US and are drinking too much Kool-Aid. .

There is no ISIS and never was, just mercenaries.

ISIS’ origins are in small Sunni sectarian group called Al Queada in Iraq. Who by around 2008 were largely dismembered and irrelevant in Iraq. But interestingly, a number of of its members had at some point come into US detention in years immediate prior – at notorious Abu Ghraib. Point being, that members of the nascent ISIS had links to US intelligence, albeit by hostile capture, but none the less that is the most common means and environment in which to break and/or turn former enemies into intelligence assets through raft of techniques.. At outset of Syrian conflict in 2012, ISIS was for all intents an Iraqi group, that suddenly appeared in Syria around late in 2012. Where they initially failed to make any impact at all against the SAA. It was only later, when they turned back on their homeland Iraq, and looted the largely undefended, new, US funded Iraqi army state arsenals, and drove all that hardware back across whole of western Iraq, flat open landscape, without any interference from US, that they started making real gains in both Syria and Iraq throughout 2014 with their shiny new hardware. In retrospect, it does all seem rather convenient timing for the ISIS explosion that came out of nowhere. The US was long losing traction over Iraq with an increasingly Shia dominated and Iran leaning Malaki leadership, who US officials were openly complaining about in media, and there was an extremely rare opportunity to attempt to unseat the Assad Baathist leadership in, the critically Israeli-hostile, neighboring state of Syria. Is speculative thought, but if ‘owned’ a cadre of turned Iraqi sectarian militant assets – then surely that was the absolutely critical time-frame to organize and deploy them into field to create chaos and mayhem.

ISIS boot camp “Camp Bucca” where Baghdadi was held and then mysteriousely released by US officials.

Wow I wonder what so ever could possibly be going on here, what amazing coincidences.