ISIS fighters carried out an attack on the newly established Syrian Arab Army (SAA) points in the eastern Palmyra in order to stop further SAA advance in the area. 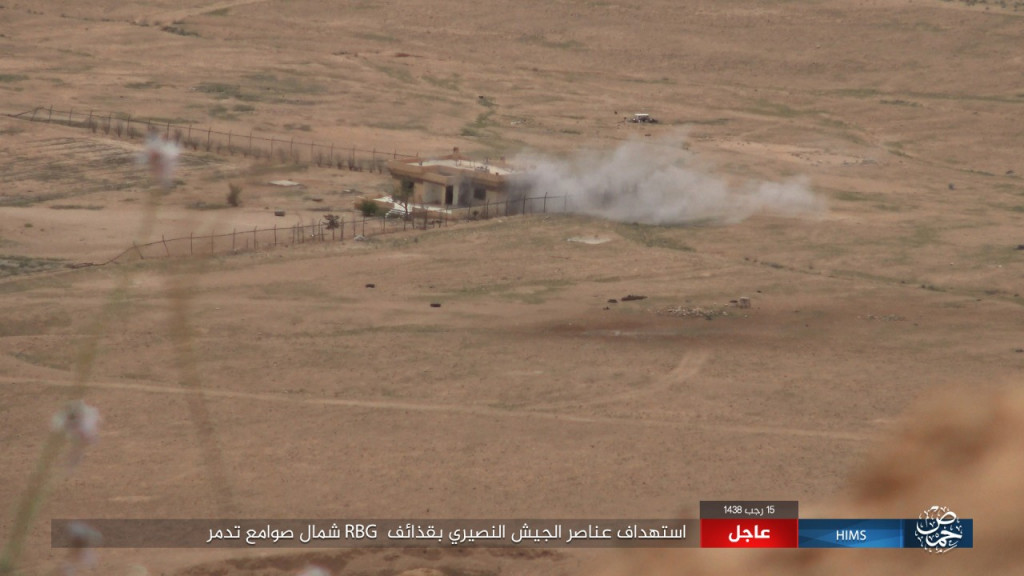 The ISIS-linked news agency Amaq released photos of the attack where ISIS fighters were able to destroy one armored infantry fighting vehicle (BMP-1).

Terrorists also claim that they have killed 14 SAA soldiers. All other sources don’t verify such losses in lives. Some people from the region tell about 5-7 killed and injured soldiers. 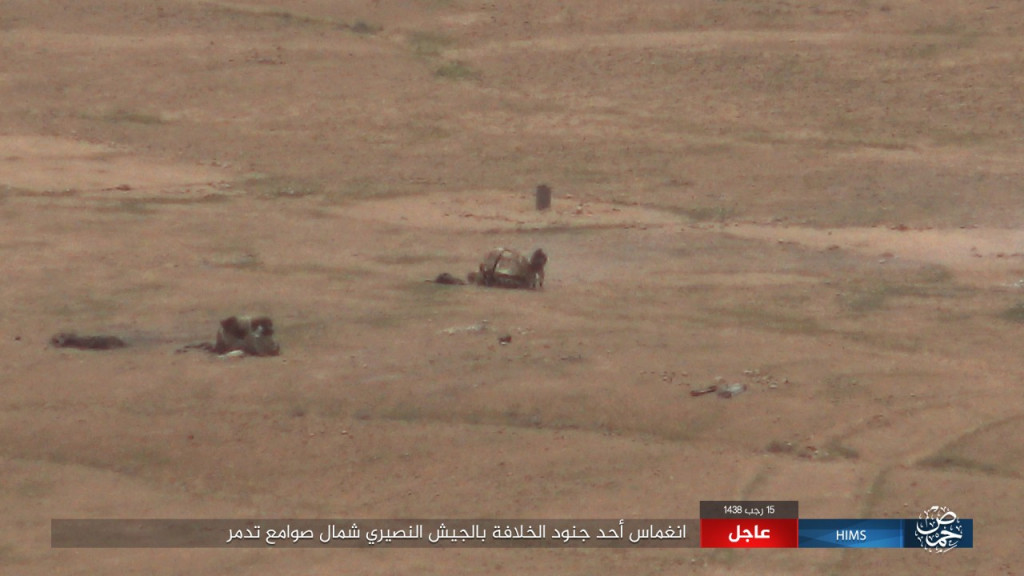 Meanwhile the SAA continue its operation aimed to capture the strategic Palmyra-Al-Seen highway.  The SAA targeted ISIS points in Al-Mahseh, Al-Suane villages and in Al-Qariaten dam area in the eastern Homs countryside. This is the first time the SAA attacks ISIS from Al-Mehseh direction.

According to opposition sources the Syrian Air Force have carried out multiple air strikes targeting US-backed FSA group “Assud Al-Sharqiah” forces in the Syrian Desert to stop their attack aimed to break the siege on Jaish Al-Islam in East Qalamun.

Due to the recent slowdown in the FSA advance in the Syrian Desert and the collapse of ISIS troops it’s believed that the SAA is able to take over the Palmyra-Al-Seen highway and isolate Jaish Al-Islam in East Qalamun. The SAA may also launch massive operations against Jaish Al-Islam in East Qalamun and East Ghouta in the end of this year or next year in order to secure the Syrian capital Damascus once and for all.

i wish i could be like a grand admiral thrawn, such a smart and cunning military strategist and tactician, to help SAA maximize their gains and minimize their losses with what forces they have!!

Grand Admiral Thrawn was a brilliant tactician. However, he always ensured the highest level of training and competence of the men under his command. He also made sure they lived to learn from their mistakes.

“Do you know the difference between an error and a mistake, Ensign?” ‘No, sir.’ “Anyone can make an error, Ensign. But that error doesn’t become a mistake until you refuse to correct it.” ― Grand Admiral Thrawn

Sadly, the Syrians are not anywhere near the level of quality needed for a brilliant tactician to be able to carry out magnificent feats against overwhelming enemies. Perhaps Iran’s IRGC and Al Quads and Basij units are.

“No one is a great solder who preserves his own life above that of his tribe and nation” -Me, I said this.

Syria should have been able to preform pincer movements around the terrorist cities within the first 8 months of the war, and then street by street clean them of the CIA’s/fake Muslims.

True, but maybe all of us on here combined can be, and hopefully it gets to the SAA! And yes, the pincer maneuver is sure effective! So simple yet so powerful! I give it an A+ haha

I was surprised at how quickly the US led Kurd’s have done a very good pincer maneuver around ISIS capital. I am not happy about the US double standards and policy, however they have executed this move very well. I think more regular Syrians need to play more strategy board games, and perhaps some fun and intuitive computer games. Just the chance to learn strategy and see how often times if you fight harder quicker you loose more men in the shorter amount of time, however, in the long term you save many times more men. The faster a war is fought and over with, the less people are lost by the victor. I recommend the game called (Company of Hero’s the original, not the 2nd one)

“The Empire is at war, Captain. We cannot afford the luxury of men whose minds are so limited they cannot adapt to unexpected situations.” – Grand Admiral Thrawn

The US and NATO need this attack to work, as the gas attack claim in Khan Sheikhoun was not enough to bog the SAA down enough. As of right now, the SAA is winning and preventing the Balkanization of Syria.

Probably just a small nuisance attack by Daesh dirt bags. I doubt that ISUS can launch a large attack any where at this stage in their demise. SAA will go on to take route 90, Al Basairi crossroads, and the oil and gas fields in the Palmyra region.

Sounds good to me!!

Playing for time and hoping for a rescue by proper US head-chopping, heart-eating rapers is all they’ve got.