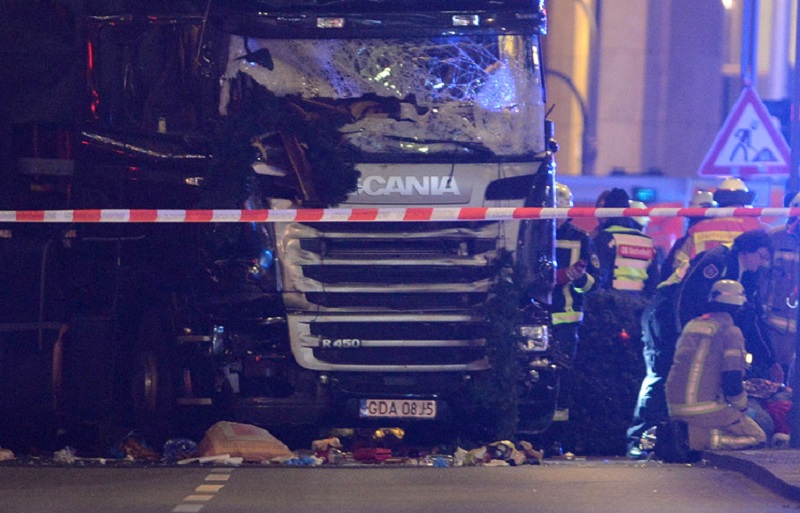 At least 9 people were killed and more than 50 injured few houres ago in one of Berlin’s largest Christmas markets, located in the western Charlottenburg district.

Officials are investigating the crash as an act of terrorism, according to a German intelligence official familiar with the matter.

The Iraqi Popular Mobilization Force tweeted that ISIS was taking credit for the attack.

According to the police the truck (black Scania) drove 50-80 metres through the market area. The truck was going 40mph. It was in the middle of a square, there are main roads either side, [where it could have come from]. But it showed no sign of slowing down,” said Emma Rushton, a British tourist.

A Christmas tree was fallen by the truck. 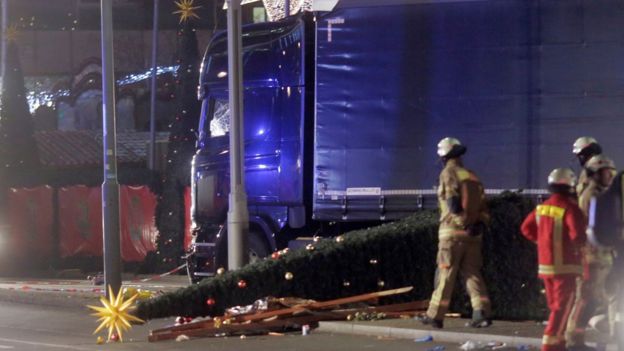 Acccording to The Telegraph, the truck belongs to a Polish firm based in the northern town of Gryfino, just a stone’s throw from the German border. The company owner said the vehicle involved in the incident was new and only had about 30,000 kilometres on the clock.

German police said that the dead passenger in the truck’s passenger seat was Polish, the nationality of the suspected driver is still unclear.

A series of attacks by Islamists  alarmed Germany earlier this year.

Law enforcement has called on people in Berlin not to leave their homes and refrain from any speculation  the incident. “Please help us. Stay at home & spread no rumors,” a police said.

just an observation: people that are aware of things outside the medias spotlight have already connected the murder of the russian ambassador in Turkey with the terror act in Berlin. I believe these coincidences are in fact messages to ppl in the executive branch of certain governments. What the message mean, it’s speculation – but everybody could try to guess what could be.

It’s not a “message” to anybody. It is just simply jihadists killing those they view as “infidels” whenever and wherever they get the opportunity. You types are still living in denial, and do not understand the real meaning of what is called “jihadism”.

right , it’s just some religious crazy, nothing to do with state actors even though they finance and arm the crazies, dream on

I didn’t say “state actors are not financing and arming jihadis”, idiot. There are several jihadi-supporting and arming states in the world today, of course – Saudi Arabia, Qatar, the U.S., the U.K., and genius Putin’s lovely “Eurasian Axis member” (!) Erdogan Turkey being the most important ones.

Yep. They are there to push the very real event of liberation of Aleppo and the subsequent revelations out of the spot light. Distraction for the masses. The Turkey event has Mossad fingerprints all over it. All else fails, try a bit more chaos.

Where’s that “little Bohemian corporal” when you need him?

In hell, with all his jihadi boyfriends.

It’s a distraction. Remember today, the syrian ambassador to UN officially has stated that the syrian army has busted 14 US led coalition officers in Aleppo. Please check it here: https://www.youtube.com/watch?v=mD-qJTaG2qg&feature=youtu.be at 32:30

In the USA they say……..”Enjoy the Mexico” ! Cartels in Mexico kidnap,behead. ..machine gun drive by…. Temples with heads and bodies falling down stairs. At least Mel Gibson risked to show us what it really was like when the 1% Decide To party. ( Apocalypto )

Good news, the Syrian amb. to UN has announced the same list of 14 foreign advisers! Said they where trying to escape from E Aleppo. This may be diplomatic talk for “we captured them”? And who said the UN is always boring. It could be a great media event for Syria and Russia.

He barely killed anyone. The Zio-Marxist army wiped out hundreds of thousands of civilians in and around Berlin in 1945. This is nothing. https://holodomorinfo.com/

fuck this shit. The nazis instead did not kill 20 millions of soviet civilians, in addition to all the military who died in prison camps didn’t they.

Hey tough guy. Next time you are in St Petersburg, please stop by one of the Victory Day parades and say that to a senior citizen with medals up and down his jacket. At 90, they will still kick your tail. Keyboard warriors, attack!

Bullshit. period, I dont believe an word, sorry, nothing about this so called terror act, in this days where everybody is an terrorist, even climate change deniers are labeled as “terrorists”, so what to expect, everything goes this days as an terror act, all to pimp something witch I define as an continuation of the western MSM hate propaganda against Islam.

Thats it. Looks like the French job, witch was an false flag as “good as any”, and this, well, take your pick, but dont expect Me to believe anything.

There are Islamic terrorists and Islamic extremists crawling all over Europe today, attacking and massacring and raping ordinary European civilians IN THEIR OWN COUNTRIES; and you are still in denial, with your head in the sand like an ostrich, talking about “western MSM hate propaganda against poor Muslims”.

The degenerate Western MSM of today is engaged in hate propaganda mostly against Russia and the secular Syrian government, in case you hadn’t noticed, idiot – NOT too much against Muslims, and NOT AT ALL against the Islamist-ruled states behind international jihad, such as Saudi Arabia, Qatar, Erdogan Turkey, etc.

Stupid Northern European liberals like you, will end up causing the death of your own nations.