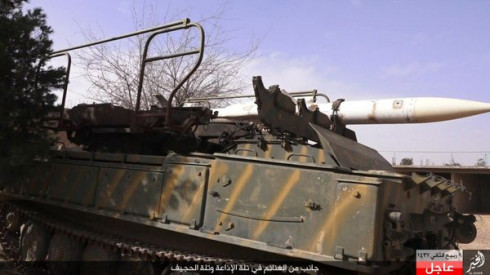 On the internet there appeared photographs of weapons captured by the Islamic State fighters near the city of Deir-ez-Sor in Syria. That region has seen intense and bloody fighting in the last several weeks, with the Islamic State launching a counteroffensive in mid-January 2016. Judging from the photographs, the militants were able to overrun a Syrian Arab Army air defense unit garrison and capture at least one 2P25 launch vehicle of the 2K12 Kvadrat air defense systems, an 1S91 self-propelled surveillance and tracking unit, and several 3M9 missiles. Judging by the external appearance, the 1S91 was operational at the time of capture.

J.Hawk’s Comment: There are several possible interpretations to this story. One is that ISIS does not, in fact, have an operational air defense system at its disposal but is rather bluffing, hoping to dissuade Russian aircraft from operating over the territory it holds, because from an operational point of view it would make more sense not to announce this acquisition and use the element of surprise to ambush a Russian aircraft.

The second interpretation is that the story is actually true. Considering that there are likely both Iraqi and Syrian Sunnis who have in the past operated the Kvadrat system, the Islamic State would likely be able to put together a complete launch crew, which in turn would require to dedicate the Russian air group in Syria to dedicate a number of aircraft (especially the Su-34) to the air defense suppression mission.

The third and most worrisome interpretation is that ISIS is actually obtaining air defense weapons through external channels (while claiming they were captured from the SAA), most likely Turkey, which in turn could procure such weapons from Ukraine. The recent contacts between these two countries’ defense officials suggest this scenario cannot be ruled out. It would also mean a significant escalation of the conflict in Syria.

Perhaps the photo’e are simply taken in the Ukraine. If in Syria: Probably an excellent exercise for SU-34. Its EW systems ought to be able to take care of such intimately known rather outdated threat.

They obviously want to meet their invisible man in the sky. As soon as they light it up it will receive an anti radar missile.

It would be nice if they would aim it at Israel’s jets who keep bombing Sunni and Shia alike. Of course Israeli is ISIS allies, so instead they will pry just shoot down a plane with an actual Syrian on board. Just goes to show that ISIS is anti-Syrian, just as the Zionist-supremacist are.