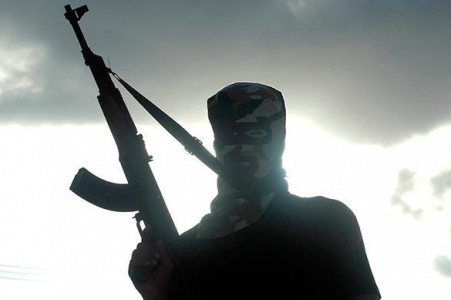 Original written by yurasumy and posted on this blog; translated from Russian by J.Hawk

I started receiving information that the Shirokiy Lan (Nikolayev Region) training ground is being used to train radical islamists, including the Crimean-Tatar “Krym” Battalion, already in June 2015. Then it kept on coming. In August I learned the instructors there include individuals with clearly Arab appearance. I also learned that the training program is focused on partisan-terrorist type of activity.

My initial reaction was that they are being readied to attack Russia in the Fall of 2015. But then I received additional information which forces me to view this event in a different light. Given the temporary halt to the Donbass fighting, at least some of the islamists are being trained for deployment to the Middle East. To aid the Islamic State which is suffering defeats at the hands of government forces in both Syria and Iraq.

There are plans to rotate all of the militants through Syria. In order to receive their baptism of fire and to refine their fighting skills. Moreover, at the moment there is no need for them in Ukraine.

The US and their Kiev puppet logic is clear. But how will Europe react to the appearance of a base in the Black Sea steppes belonging to an organization designated a terror group by all the EU members? Does anyone believe this is a good way to get closer to Europe?

What’s more, an islamic militant base is always a headache, for any government. Be it Turkey, be it…Ukraine. They are always a prelude to war. We remember how radical groups tried to destabilize the internal situation in Turkey both last and this year. And Kiev is the capital of two maidans and it’s very likely it will soon experience a third. And if Islamic fundamentalists take part in it…

J.Hawk’s Comment: One has to keep in mind that the US has “outsourced” much of the training of the “moderate Syrian rebels” to the Gulf Arab states, including Saudi Arabia. It is not known where, exactly, these militants are being trained, and it is entirely possible that Ukraine “volunteered” to be a base for such training. It would also be consistent with the Saudi preference to export their Wahhabi extremists (the two wars in Chechnya are a perfect example of that) in order to prevent a destabilization of their own country, so they very well could turn up in Ukraine as “instructors”. In addition, since nobody has ever figured out whether these “Syrian rebels” are even Syrian to begin with, they could one day reappear as “moderate Crimean rebels” and attempt to infiltrate Crimea. While Ukraine and Saudi Arabia seem like most unlikely allies, they have a commonality of interest. Both sides find themselves at odds with Russia, be it on the Donbass or in Syria. Both have been toying with Islamic extremism as a means of achieving their foreign policy objectives, including against Russia. As has their patron, the United States, which originated the practice already during the 1980s.

The other possibility is that Poroshenko, for his part, might actually be hoping to rid himself of some of the more extreme Tatar elements by shipping them off to Syria and hopefully get themselves killed under the leadership of the Wahhabi Saudis. He is probably aware of the potential threat their extremism poses to his pretty fragile hold on power over a crumbling Ukrainian state. For the moment, at least, Poroshenko appears unwilling to escalate the situation and is limiting himself to belligerent rhetoric, so launching such extremists against Crimea is probably not in the cards for the foreseeable future. Nevertheless, some of these extremists will most likely survive and return to wage their own jihad against Russia, irrespective of what Poroshenko might want.

Tags:isis, the us, turkey, ukraine