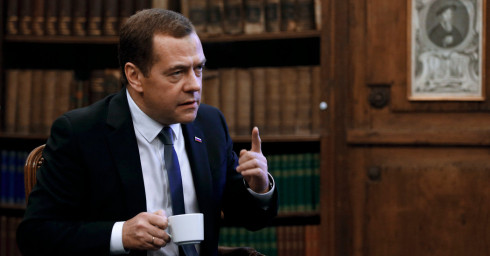 Despite Russia’s genuinely honorable intentions, in the eyes of the ever-belligerent political West, this proved to be exactly what Medvedev said – a weakness.

On Monday, Deputy Chairman of Russia’s Security Council Dmitry Medvedev stated there was no point in having arms reduction talks with the United States unless the declining power changes its bellicose behavior. Russia and the US, the world’s most powerful nuclear-armed countries, have negotiated a series of major strategic nuclear arms reduction treaties since the early 1980s.

Despite repeated US violations and unilateral withdrawal from important treaties during the Bush era, most notable of which was the ABM (Anti-Ballistic Missiles) Treaty, Russia was still willing to continue negotiations. In good faith and with global security in mind, Russia oftentimes offered more than necessary to accomplish a treaty which would minimize the threat of global nuclear annihilation, if not eliminate it entirely. Medvedev himself put a tremendous amount of effort and his political lifeblood into accomplishing this, making it the priority and the focal point of his presidency.

When asked about “how important it is for humanity to start extension talks on the START-3 Treaty with Americans or a new agreement on limiting strategic arsenals” and what he thought about it, the former president responded:

“…as a person who was directly involved in START-3 negotiations and signed it in 2010, I consider any new negotiations to be the most inopportune. Just last year, negotiating a new agreement was different, which was also mentioned by President Putin, who extended START-3 for 5 years…

…and now everything is a dead zone. We don’t have any relations with the US. They are at zero on the Kelvin scale. And we don’t need to defrost them. There is no need to negotiate with them. This is bad for Russia. Let them come or crawl back and beg for it. And they should value it as an act of our utmost generosity. Otherwise, this is how it looks – they toss only sleaze our way, and we go, there, have this nuclear deal, please…

…it is counterproductive, dangerous and (will be) seen as a sign of weakness. Let them truly appreciate such a dialogue and ask for it… …by the way, there is another proven method of communicating with America on this topic – a shoe on the UN rostrum. It used to work.”

Such statements might seem “too harsh”, but they are hardly misplaced. The Russian people and leadership stand united in a way never seen since the Second World War, because they see the immediate danger the US and NATO pose. After nearly 30 years of attempts to build a normal relationship with the political West, despite US/NATO/EU’s superficially “friendly” stance and repeated rejections of Russia’s initiatives, the Eurasian giant is not just disappointed, but also angered by Western encroachment and what can only be described as an attempted crawling invasion (luckily, yet another failed one).

And indeed, in 2010, Medvedev signed the New START (Strategic Arms Reduction Treaty, known as START-3 in Russia) with Barack Obama. Last February, the treaty was extended for another five years. This was Russia’s last-ditch effort to show continued commitment to strategic security, despite the West’s open hostility. All futile, unfortunately. This may very well be the primary reason behind Medvedev’s rightful anger, as he truly wanted better relations with the political West. Consequently, his suggestion that Russia should get tougher with the ever-belligerent US holds merit, as “playing nice” obviously doesn’t work.

Russia and the US possess around 90% of the world’s nuclear arsenal, with approximately 6,200 and 5,400 warheads respectively, according to the FAS (Federation of American Scientists). Since the early 1970s, USSR/Russia enjoyed a considerable strategic advantage. However, unlike the US, which held an advantage until the late 1960s and had multiple plans for nuclear first strikes on the USSR (and China), Russia was ready to negotiate and sign treaties even in situations where it had a clear advantage. The Eurasian giant’s arsenal peaked in the mid-to-late 1980s, reaching nearly 50,000 warheads. In 1990, it still stood at 40,000, while the US had around 10,000, giving Russia a comfortable 4:1 advantage.

Russia was ready for further reductions, even though massive cutbacks and degradation of its enormous conventional military power in the aftermath of Soviet dismantlement left the country vulnerable. By 2014, Russia and the US had a nearly identical number of warheads. Few countries in history, if any, would be ready for such a massive power reduction just so they could keep the world peace. Despite Russia’s genuinely honorable intentions, in the eyes of the ever-belligerent political West, it proved to be exactly what Medvedev said – a weakness.

Luckily, Russia kept many aces up its sleeve. Being significantly ahead of its bellicose rivals, especially in new hypersonic technologies, this “weakness” quickly faded away. Medvedev most likely has this in mind when saying Russia shouldn’t negotiate. It has well over half a dozen operational hypersonic weapons, while the US has none. After numerous humiliating failures, without a single successful test in nearly a decade, the US is years away from fielding a working hypersonic weapon.

Russia, on the other hand, fields not only such weapons, but also advanced ICBMs, intercontinental-range underwater drones and even orbital weapons. The country has no incentives to negotiate with the US. After all, even if it did, it would be naive, to say the least, since the political West understands and fears only one thing – raw power.

The drive for nuclear disarmament is just a cunning trick to try to remove the weapons that guarantee parity and a multipolar future world order. The idea is to return the world to western armies and gunboats controlling the world. Of course Russia is not going to be stupid enough to give up the tools that give it parity in any confrontation on the battlefield with the west and also the ultimate guarantee of its security. The US will do nothing with its homestead at risk! Indeed nuclear weapons have been the guarantor of peace over the last three quarters of a century. Russia needs more nuclear weapons, and different sorts. The Ukrainian special operation would be a lot easier with a few booms in the night!

Work At Home
Reply to  RealityOfWar

Last edited 5 months ago by Work At Home
-4
Reply

The whole mechanism to destroy a society is to flood it with guns and let the locals kill each other. If necessary, one or more local thugs (Zelensky) are supported by the puppeteers (NATO). US is following what it practices at home.

There is a whole sociology about the prevalence of alcohol and gun shops in black neighborhoods across America.

He is right total waste of time talking only action is understood by the USA/UK- get everything ready for a full scale war as the USA still lives in the days of cowboys & Indians.

a misile or two to england would be nice 🙃

To the west unfortunately breaks all treaties, agreements or contracts anytime it is convenient to do so. Some are broken secretly like bioweapons research and some are broken openly. They are not reliable and even when they stick to a treaty a change in government can often lead to it being re interpreted to mean something other than what was negotiated.

If we were to have a BIG change in the governments of the US UK F EU Germany, THEN they should rethink. If we have the same, the Russians should cold shoulder the West. In the meantime, it may be worthwhile to make overtures to a few well CHOSEN politicians and opposition politicians and figures to counter the propaganda they are being fed.

I would go even further than Medwedew. The western applied sanctions and support of ucrainian war has reached levels where I think that not only treaties should not be expanded… I would directly close any embassy of these countries and cancel diplomatic relations completely because i don’t get the point why they even want to speak to this agressors when it is long proven that they are not willing, able or allowed to change.

The west is a bully and must be treated like one. No more talks unless they beg. You send a missile to each one of these criminals houses, You will get the attention of the rest of them and they will realise it’s time to shut up and listen. Bullies need a punch right in the nose.

If Russia is to be taken seriously, Send a missile to George Soros and Obamas house. Infact the best thing that Russia should have done was send a missile to the 2022 bilderberg meeting in washington DC .

Not too harsh it’s due response to the big liar