On the whole Middle East, especially after all the destabilization the US “Arab Spring” brought, idea of total reorganization of existing borders by means of war is striking fear 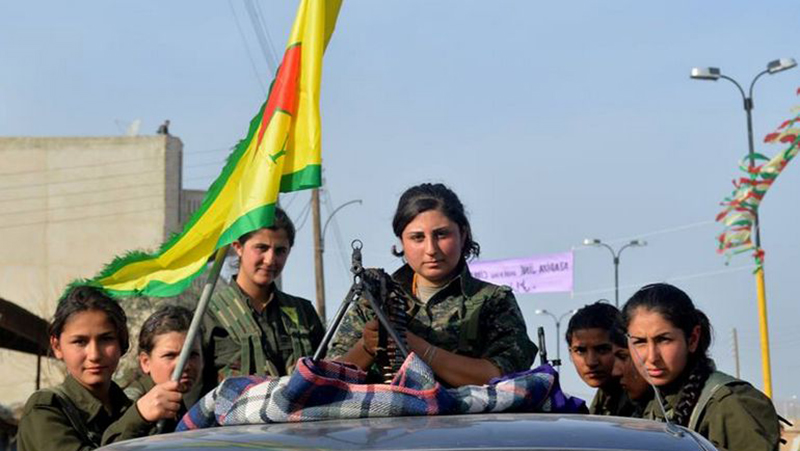 At the end of last year, well informed, “Jerusalem Post” published an analytical article named “Will 2016 be the year of Kurdistan?”. In the various estimates American experts, including institutions, operate on the idea that by year 2030 could occur an independent Kurdish state that would unite the Kurdish population from all four countries where she lives today.

The Kurdish question once again became popular, soon after the US occupation of Iraq in 2003. The once mighty Hussein’s state, soon became de facto divided into three parts. In the North was created an autonomous Kurdish entity, in which familie Barzani holds all the levers of power and authority. Rich in oil, it has a solid basis for building military and political capacity, so we can already speak about the Iraqi Kurdistan as reality. President Barzani and his right-hand son Masud, very wisely and carefully build their position in the region, not talking about independence, but with preservation of good contacts with all the major powers they actually develop and build that independence.

After the French, British and Americans, with the help of Turkey and the Saudis, began tearing Syria, in a sea of new military and political factors have emerged some Kurdish organizations. Despite the political conflicts of the various factions, which occasionally turned even in armed conflict, Syrian Kurds formed their own territory, with a blessing of the Assad administration and support of Americans. We remember the great success in the battle for Kobani, when Kurds took the city from ISIS. US support for the Kurdish Democratic Unity Party these days provokes sharp reactions from the Turkish Prime Minister Erdogan. For him, this Kurdish party is just a branch of Öcalan PKK, with which his country is at war again. In a strange way, the Kurdish government in Syria has support even from Iran, the only country in which Kurds at the moment are not militarily active.
Kurdish issue, when it comes to Turks, understandably causes tremendous anxiety. The largest and most radical Kurdish community is living in the country which Erdogan manages for more than fifteen years. In four years from now, it will be exactly 100 years since the signing of the peace in Sevres, which started the breakdown of the Ottoman Empire. Part of the document was the emergence of an independent Kurdistan on the territory of Turkey. Its creation was stopped by Kemal Ataturk using force of arms, and by the time of signing of the Lausanne Peace Treaty in 1923 the idea of Kurdistan was removed from the table. But since then, not so small part of the Kurdish people is fighting against the state of Turkey, with a aim to put solution of Sevres back on the table.

Kurdish question in the meantime has become currency for various inner games within Turkey. For long time it was speculated that the Turkish army deliberately stimulates conflict with military forces of Öcalan PKK each time they have a problem with the civil authorities in the country. War conflicts gave the elements of a state of emergency in which the army was able to impose its will even to politicians. Erdogan and the AKP are the first political force that was able to defeat the army and to placed under the control of institutional policy. But after the failure of the June elections, the AKP, same as army was doing, resorted to the use of the PKK. The Government, under the pretext of fighting terrorism, ended the truce and began military operations in areas inhabited by Kurds. When the PKK responded, he started a real war in which the Turkish army operates in the cities, and thousands of people have had to leave their homes. Among other things, and because of this, the AKP in the November elections got more votes and managed to form a government. The pro-Kurdish party received less support, and PKK and the war option once again became top priority among Turkey’s Kurds.

This Erdogan’s play with fire scares many in Turkey and radicals even accuse him of beeing an ceypto-jew, which will eventually leave the country without the Kurdish part. In the whole Middle East, especially after all the destabilization the US “Arab Spring” brought, idea of total reorganization of existing borders by means of war is striking fear. Very “popular” are becoming the maps of the Great Middle East, which were published in 2006 by US intelligence member Ralf Peters. This map, which is handled informally and in institutional circles, envisages the formation of several new states, such as Balochistan, the Holy Islamic state and the Kurdistan state.

Number of Kurds is estimated at 25 to 30 million, making them potentially very powerful nation – this is the greatest nation in the world that does not have its own state. It is true, however, that they are still very divided politically, and that there is insufficient integration, on basis of which anyone can imagine their union. However, if we know how the major powers throughout the last century played with creation of new nations and states, it is not difficult to imagine the process that could in fifteen years time create a powerful movement for the unification of the Kurdistan from present time unrelated crowds.

Road to such solutions is typically achieved through new wars. Therefore, it is likely that this unprecedented population migration to Europe will continue in the future.

Miša Đurković, Research adviser at the Institute for European Studies

you can take it to the bank