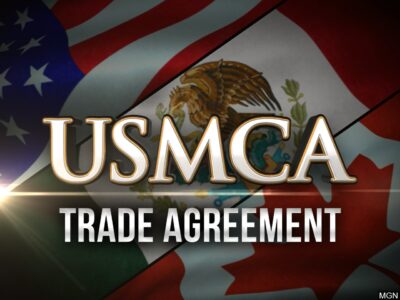 London seems to be seeking a deal to replace the European market.

In the contemporary world order, it is practically impossible for any country to maintain a status of economic power without participating in broad free trade zones, ensuring a strong market in a specific regional space. While being part of the European Union, the UK participated in the local market and enjoyed free trade with other member countries. However, after Brexit, London has been looking for alternatives to fill the trade void left by the EU. One of the most wanted destinations by the British appears to be North America, where the USMCA, the successor economic bloc to NAFTA, brings together the US, Mexico, and Canada in a unified regional commercial platform. However, not all members of the bloc seem pleased with the British attempt to enter into the agreement.

Recently, the possibility of the EU joining the USMCA has been generating controversy in the international media. Journalists and analysts from the most diverse areas have commented on the case, evaluating the opportunities and risks that would arise with such an initiative. In fact, little is known about where such information came from. Several British media agencies began to report that they had received confidential information from some government officials revealing Prime Minister Boris Johnson’s intentions to apply to Washington for a seat on the USMCA, which surprised all public opinion.

Despite the uncertain sources for the information, the possibility seems quite plausible, considering the recent events. Indeed, London has been approaching Washington in search of a trade deal for a long time. At first, the British goal was to celebrate a bilateral deal with the US, but negotiations in this sense have been declining due to some Biden Administration’s attitudes. There is no relevant conflict of interest between these two countries, but Biden, at the moment, seems much more focused on solving America’s internal economic problems than on entering into new trade agreements, which led him to delay negotiations, making the bilateral agreement a distant reality. For London, however, this is a very urgent issue, as the absence of a free trade zone with the strength of the EU causes serious impacts on the national economy, leading the country to increasingly seek broad trade agreements, which could guarantee greater market fluidity and circulation of goods and capital. So, it is indeed possible that the British government is planning to apply for a seat with the USMCA, considering that it would be an even more beneficial agreement for the British than a bilateral treaty with the US.

Mexican President Antonio Manuel Lopez Obrador recently commented on the possible request to be made by the UK, but did not take a clear position, just stating that it is a matter to be dealt with by all members. Curiously, Mexico is the country that has paid the most attention to the British in this regard, and there was even a recent summit between the secretary of Foreign Affairs of the UK, Liz Truss, and the Mexican secretary of Economy, Tatiana Clouthier, but no relevant results were announced. On the other hand, although the US government has not yet officially taken a stand on the UK-USMCA case, Biden’s attitude is expected to be the same: prioritize America’s internal problems and ignore complex negotiations on issues that are not in US direct interests. With American society becoming increasingly polarized, in the midst of one of the biggest migration crises in the country’s history, and with the government facing a serious crisis of legitimacy after the incidents in Afghanistan, helping the UK is the least of US concerns at the moment. And, certainly, the American attitude will automatically be followed by Canada, which tends to ratify Washington’s foreign policy initiatives. So, becoming the fourth member of the USMCA seems really unfeasible for the UK – at least at the moment.

The British objective is only one: to reach the North American market, either through the USMCA or through a bilateral agreement. London needs to expand its trade and replace the European market. The US and Canada do not have this concern, while Mexico, which has been disadvantaged by some of the USMCA regulations – which are structured to favor the US and Canada – is interested in new market alternatives to achieve favorable changes. Amidst so many diffuse interests, the most likely is that the situation will be resolved only with unilateral agreements. Perhaps the UK will become a partner of the USMCA and gain some commercial advantages, but it will certainly not be a member. It will not be in North America that London will seek what it lost in Europe. A possible scenario for the future is that the UK will try to form its own economic bloc, rather than trying an existing one. However, the denial given by the US government to the UK in this issue will not represent any disruption in the political alliance between both countries, being just a small friction amid a broad strategic partnership that will remain strong.

The british are aware this century will belong to Eurasian nations, not an anglo/american extreme minority of wealthy, sheltered fools who are busy squandering their families wealth from past generations.