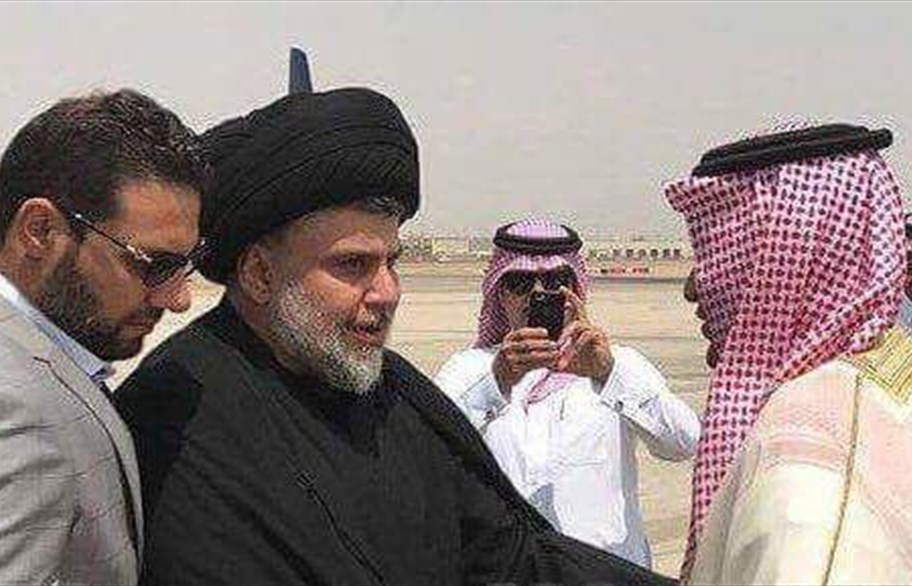 Iraqi Shiite leader Muqtada al-Sadr arrived to Saudi Arabia on his first official visit to it in 11 years. Minister of State for Arab Gulf Affairs, Thamer al-Sbahan, welcomed Al-Sadr and his accompanying delegation, which includes clerics and members of the Iraqi Sadrist Movement at King Abdulaziz International Airport in Jeddah.

According to the official statement of the Al-Sadr office, the visit was “based on an official invitation from the Kingdom.”

However, more rumors appeared on the alleged goal of the Al-Sadr visit.

“Al-Sadr’s visit to Saudi Arabia confirms the importance of restoring relations between Saudi Arabia and Iraq, and he will meet with a number of leaders of the Kingdom,” a source said commenting the visit. “Al-Sadr is one of the few Shiite clerics in Iraq who demand the need to establish balanced relations with all neighboring countries.”

According to the source source, Al-Sadr works to deny the general idea that Iraq is a follower of Iran.

“Al-Sadr violates the Iranian orientation in several issues of the region, especially the situation in Syria,” the source said pointing out that Al-Sadr is working to end the existence of the Iraqi Popular Mobilization Units (PMU).

“Iran is trying to strengthen PMU at the expense of the government forces, but Al-Sadr rejects this trend and has repeatedly called for dissolving PMU and integrating it with the official forces at the end of the war against ISIS.”

The Iraqi source’s words have not been confirmed yet, but Al-Sadr has already taken several moves against Iran over the past period. His followers have even cheered against Iran in several occasions.

He also called on Syrian President Bashar al-Assad to leave after the US missile strike on Al-Shaerat airport in Syria, reflecting already the new approach of Al-Sadr.

Hrky75
Reply to  Kids in Africa

And who would the “authoritarian Shia leader” be???

My guess would be the sectarian and corrupt Maliki, you know, the man whose son was arrested in Lebanon with a huge amount of corrupt money in a briefcase and suitcases.

Thanks for the info :-D

Without PMU, without Iran and without Hezbollah, “daesh” will have entered Baghdad and taken all Syria.

Never give up your weapons. The more you are isolated from USA and their allies, the stronger you are.

Indeed. This Sadr character works for the Zionists.

As Jesus (PBUH) said: “By the fruit of their works you shall know them”.

Very good point! Russia, Hezbolla, Iran, PMU and now even Turkey to some extent! Iraq was going to be raped again! Iraq and Syria would have become Lybia! These MORONS who think Iran was a problem are so stupid!

Just USA and allies trying to inject their puppets.

Funny how nobody say to dissolve US military bases after “daesh” is finished. XD.

Insightful point . I would extend it to the whole US war machine and warmongering .

USA wants the Middle east to be like in Afghanistan.

Hezbollah and Iran are strong because Hezbollah doesn’t rely on USA. All the countries that relied on USA have became weaker and weaker.

Yeah, like Israel is almost a failed state now. A little push by the mighty Hezbollah and great SAA and they will reach Eilath in half a day.

this muqdada sadr is know for his anti kuwaiti ideas, saudi inviting him shows that saudis are indeed eyeing the oil field in kuwait especially faheel area.

Historically Iraqi Shia were never pro-Iranian, before 1990s and US sponsored Shia uprising that ended in bloodbath. It probably has to do, with the fact Iraqi Shia are Arab and proud to be. Even during Iran-Iraq war there was never any incident of Iraqi Shia refusing to fight or a large scale defection. Theologically, Iranian mullahs claim primacy within Shiism because they are the biggest Shia country and most important religious schools and universities are in Iran. On the other hand Shiism originated in Iraq and most important religious sights are situated there. As for Al Sadrs beef with Assad it has to do with the fact he is theoretically an Alawite – and most hard core Shia and indeed Sunni don’t consider them Muslim at all – and practically a secularist and a Baathists – two deadly sins in old Muktada’s book…

… you present some strong arguments to back up your claim…

No I won’t. Because time reveals everything. You will see too. No point arguing with an ally really…

Discussing is not arguing. You present a logical point backed up with solid arguments and I’ll accept it and even learn something new. That’s the whole point of a civilized conversation. Posting a comment -“Completely wrong and extreme” and refusing to back it up – makes you look childish, ally…

Shiism did start in Medina but it took it’s shape as a separate branch of Islam in Iraq after battle of Karbala in 680 AD. Now I’m neither Muslim nor a theologist – I was trying to point out some reasons why -IMHO- Iraqi and Iranian Shia in general and clerics in particular didn’t always see eye to eye…

The battle of Kerbala is just the aftermath of what happened after the death of the Prophet of Islam. Shias don’t recognize the election of the successor to lead muslims.

Who saved Iraq and Syria? Russia, Hezbolla, Iran, PMU and now even Turkey to some extent! Iraq was going to be raped again! Iraq and Syria would have become Lybia! These MORONS who think Iran was a problem are so stupid!

Iraq knows, either ally with Sunni lead and sharia ruled Saudi’s OR Ally with Shiia Iran. The ones who kicked out USA puppets!

The Shiia have the numbers in Iraq! To me, this new blog is telling me how desperate the Saudi’s are! They will offer this and that and more and more! And this Shite leader will milk everything he can!

There was a nice and very informative 6 part interview with Sabah Alnasseri – Iraqi Shiia political scientist about recent history of Iraq and Shia-Sunni relation. I’ll post you a link. In essence he argues that before Saddam there wasn’t any sort of Sunni-Shia rift in Iraq. In fact Shiia were wealthy, land owning class while Sunni were mostly landless and forced by necessity to choose army and civil service – hence emerged so called Sunni ruling class. Paradoxically strongest political party among Iraqi Shiia were – the Communists of all people. So there was very strong secular leaning among them and there was no chance of Iranian type Islamic revolution. Saddam made sure it changed when he murdered most members of Iraqi Communist party – on the orders from US of curse. Anyway here’s the link, enjoy: https://www.youtube.com/watch?v=Avu9iJJOYR0 As for who saved who – Russia, Hezbolla, Iran, PMU and now even Turkey – are saving each other with the help of their allies and “fellow travellers” (Turkey). The alliance is strategic and political – not religious and ideological. Iran has no ideological reasons to save Assad and neither does Hezbollah. Assad has every reason to fear Islamization of Syrian political system. But non of these countries would survive what Neocons have installed for them – and they all know it very well. That’s why the alliance works and is winning…

which is exactly why i said: “the divide between Shiia and Sunni is greater than Persian and Arab! The self respect of Self rule compared to USA rule is greater than the divide between Shiia and Sunni! Iraq is trying to shake off American rule and Iran is helping! Saudi Arabia and Israel are trying to stop this!” I have always believed in the saying that “there are no true allies, only common interests”! So for this we are in agreeance! But let speak frankly here, Iraq has ONLY 2 options: 1. Ally with USA, Israel and Saudi Arabia 2. Ally with Iran, Russia and Syria

Everybody knows that the last 27 years has been an American invasion of the middle east! I personally admire Iran for kicking out American puppets, enduring decades of sanctions, building their own military industrial complex, having a publicly owned central bank. So besides the well known issues of the middle east which most people believe are the problem (sunni vs shiia, persian vs arab, energy wars) i believe the real issue is that Iran is showing Iraq that they can help END this Israeli / American domination of the world BY RESISTING! A common interest to be free and independent! If Syria and Lebanon has missiles on their border, Israel CANT DO SHIT! Israel dominates the area because they have nukes, they destroy anything that is a potential threat (they do this pre-emptively). So for the common good of the middle east and therefore the world, for the good of ALL MUSLIMS, for the good of persians and Arabs. The middle East must be equalised! Israel must be brought to bare! So i do not care for your sunni / shiia / iran / iraq! I care for equality and freedom! The war against financial domination FOR THE WORLD is happening now and we have a chance! Iran, Russia, Syria, Lebanon ARE THAT CHANCE! When the western world points their finger and say “they are the bad guys” then i know they are the good guys! A meeting between Saudi and Iraq is BAD but it also shows me how desperate Saudi are! So forget your Iran / Iraq issue! It means NOTHING! sunni vs shiia means nothing!

This is about money and power and u know it!

Iraq is having its strings pulled, its being tempted away from Iran WHO HELPED IRAQ AGAINST SAUDI FUNDED ISIS! Your documentary means nothing because it is not covering the real issues at play!

I am deeply disappointed and sadden, by Sadrs comments and perceptions of whats going on, after all this years, He suddenly sounds like an American vassal, remarkable, isnt it, when the time is closing in, we see their true colors, it never fails, Arabs, and again, this wedging, driven and hammered in, by traitor’s and false teachers, to polarize Islam and the Arab world.

in Islam their is ONLY one path, the true one, the Noble Quran, witch is the teachings of Allah the merciful and benevolent. Anyone, whom from that moment of, deviated from the true teachings of Muhammad, (may peace be with Him) the final prophet, is not an Muslims, just an fake/false one, and this goes to the even worse Christians, whom have no idea of what the teachings of Yeshua( Issa in Islam) was about at all. Yup, both are ignorant to their core, and that’s no joke.

He is visiting Saudi Arabia while Saud Gangs are attacking Shia Houttis and supplying weapons to Al Qaeda to kill Syrian people!…it is similar to visit Tel Aviv….

Eskabar, I am still unconvinced and will probably remain so no matter what you say or what this report says. I question the manner of this presentation, but that’s just me, and with that said, I will go by my business and you go by yours. I care nothing for what anybody here says or thinks, the site is infested, but then again, that’s what usually happens. Y’know, they find out where we’re getting all our information from, and then they creep in, and I will say this: I do not agree with ‘he who controls the information controls the people’. For me its ‘For he who controls the information still don’t control sh*t this way.’

This news doesn’t change my thinking one bit. It did nothing.

From earlier reports I got the idea that Sadr is more of a nationalist, a maverick populist, then a shia internationalist.

It would make sense for him to search for a second powerbase among the sunni. One way could be to have good relations with the Shammar tribe, both prominent within KSA and in Mosul.

The Syrian Shammar btw have been longstanding allies of the kurds and YPG.