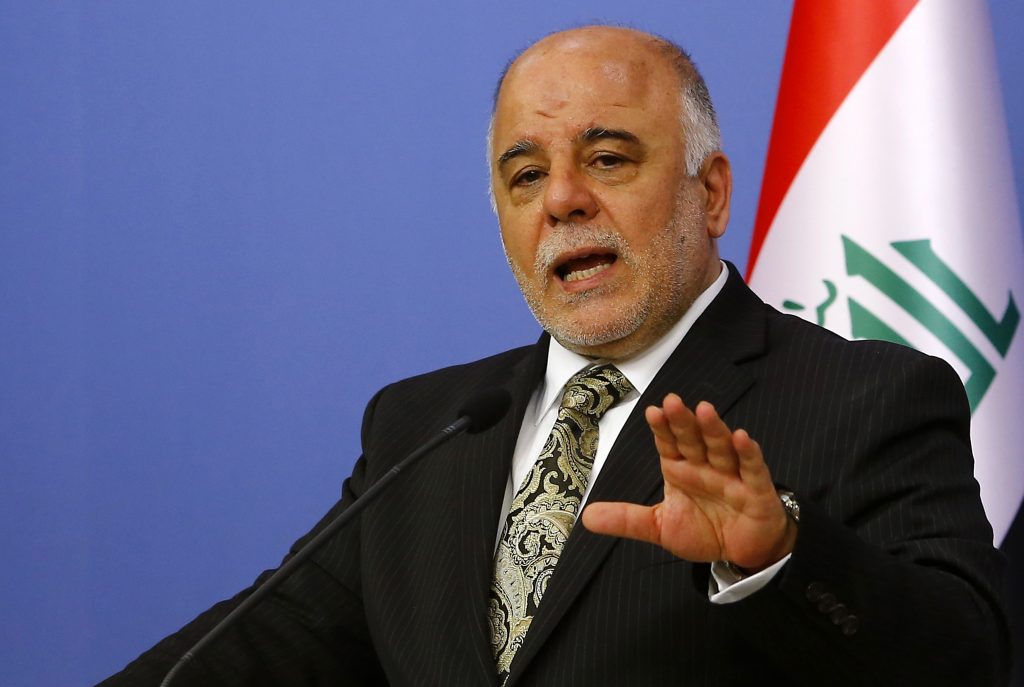 Iraqi Prime Minister Haidar al-Abadi warned from the coming independence referendum in Kurdistan Region of Iraq during his weekly press conference in the Iraqi capital Baghdad. He said that it will have negative effects on everyone.

“[We] will not be dealt with the referendum of the Kurdistan Region, because it is unconstitutional and illegal,” Abadi said commeting the Iraqi government’s stance towards the referendum. “I respect the aspirations of the Kurdish people and all Iraqi people, but we live in one country, and this country is governed by the Constitution, and we all respect this Constitution.”

“We called on the region to reopen their institutions, because I don’t know how the referendum will be held, and what authority will hold the referendum, there is an internal dispute, there is no parliament and some ministers are unemployed in their ministries so I’m warning because the result will be reflected on us too,” the Iraqi prime minister added.

Abadi also commented on the issue of cooperation between Peshmerga (Iraqi Kurdistan forces) and the Iraqi Army:

“We have worked together and achieved great victories, all in cooperation between the Iraqi Army and Peshmerga Forces, and there hasn’t been any single state of friction between the two sides, so why should we lose this success?”

Abadi called for an Iraqi-Kurdish dialogue and denied his intention to use the Iraqi Army against the Kurdistan Region.

“There should be a dialogue between the government and the people, and there shouldn’t be a one-sided step, because there are common denominators among us, and I won’t send tanks to the region, for example because of the referendum. If there is a wrong act, we have to communicate with people because the state is serving the citizens, and most politicians in Kurdistan are not rushing to hold the referendum, but they say it’s a popular demand and I don’t want to be against it alone,” he said.

From his side, Secretary-General of Badr Organization, Hadi al-Ameri, warned against the Kurdstan independence referendum.

“The dispute on the issue of land is existing, no way,” he said in speech in the Al-Taji area north of Baghdad. “The division will lead to civil war and we will disagree among ourselves on one room, not just on one land.”

“No region, no division, and Iraq will remain united … because we believe that division will lead to a civil war,” Al-Ameri added.

The Iraqi Kurdistan government hasn’t confirmed that it will take the decision of independence in the event of the approval of the majority of citizens in the referendum. It’s believed that the referendum may be just a tool to put pressure on the Iraqi government in order to obtain more power in the post-ISIS period.

It’s worth to mention that the government of Kurdistan depends on large financial resources from the Iraqi government, making independence even more difficult. As well as, Al-Ameri threat reflects the fact that almost all Iraqi Shiites and Sunnis oppose the independence of the Kurdistan Region from Iraq.

There is no good blood with the communist kurds except with obama, the cia, saudis, israel, and NATO… and that was only to install a now defunct pipeline that will never be built…

Now that kingpin obama has been removed, and trump is pulling funding for war in syria, the rest of the elements have also started to collapse(qatar)…

And with raqqa changing hands to the kurds, trump will declare victory and pull the plug on everything, leaving the kurds to their demise(it was an OBAMA plan, not his…) kurds are toxic politically: turkey, russia, syria, iran, and iraq all despise them: these are ACTUAL COUNTRIES that we have to deal with… You think that trump is gonna give the kurds a blank check to do whatever they want? Hell no… Besides that the kurds asked for it when they got greedy with the oil before isis(there were oil price disputes in iraq before isis)… Besides that, do they really think iraq is gonna give up those oil fields in the north? Hell NO…

Iraq, Turkey and Syria need to unite and pummel these guys to oblivion.

CIA promoted referendum in an attempt to divide Iraq. Sykes-Picot placed the borders of several countries through Kurdish areas quite deliberately to be able to use them to stir trouble in all those countries.