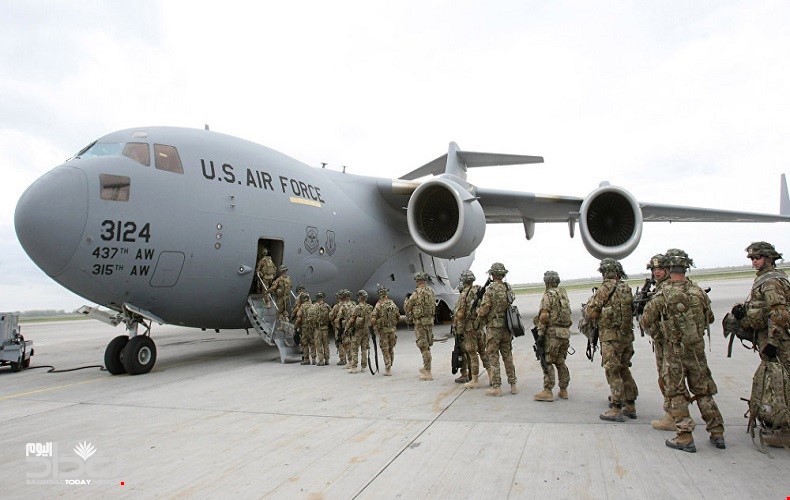 On July 27th, Iraq’s Popular Mobilization Units (PMU) told Washington that the US troops should withdraw from Iraq to ensure their safety.

This was reported by Baghdad Today, citing the Iraqi organization.

“The US presence in Iraq is rejected politically, and now Iraq has been in a state of stability for a while,” said Majid al-Kazimi, of the PMU.

“The attempts to expand US presence and remain in Iraq is unacceptable, in addition to making Iraq a land used to harm neighboring countries by the US, this is contrary to the Iraqi constitution and contrary to its laws.”

He further added that “this US behavior may receive unbalanced responses from the internal players in Iraq, thus it is better to end US presence in Iraq, in order to preserve personnel and ensure the safety of the forces.”

“American concerns of casualties, caused by the PMU and resistance factions is justified. These losses would affect President Donald Trump’s future, especially since he’s heading for a new presidential election, and this announcement of US concerns is aimed at antagonizing the popular crowd.”

Furthermore, al-Kazimi reminded of a recent statement by former US Ambassador to Iraq Douglas Silliman, who said that Iraq was a potential flashpoint in the region.

“We absolutely see Iraq as one of the possible flashpoints,” Douglas Silliman said.

He explained that in this time of heightened tension, the PMU, a wide collection of local Iraqi militias could unintentionally spark a conflict between the US and Iran. Since the US considers the PMU Iran-backed.

“What I’m worried about in Iraq,” Silliman said, “is not a conscious Iranian decision to attack American forces directly or through one of its mostly-controlled proxies.”

“I’m worried that people with other PMF [Popular Mobilization Forces, what MSM calls the PMU] groups,” those that receive support from but are not controlled by Iran, “who for their own political reasons as they try to elbow their way to the front of the PMF queue, might find it to their advantage to attack Americans even if the Iranians haven’t decided it’s time.”

“If any of those were to produce Western or American casualties, it is quite likely that Iran will be given the blame,” Silliman said.

“The Trump administration has said several times that the responsibility will rest on Iran for having organized, trained and armed these groups even if Iran does not issue an order to act.”

Joan Polaschik, the acting principal deputy assistant secretary of state for Near Eastern affairs, told US Senators that some Iranian-aligned militias “plot against U.S. interests and plan operations that could kill Americans, coalition partners and Iraqis,” Bloomberg reported.

Thus, to avoid accidental casualties and an accidental start of a war, the Iraqi side offered the simplest solution: just leave.

How is that? Irak get tired of freedom and democracy?

Actually, Afghans are slowing the world how to inflict casualties on the Americunt genocidal criminals. An Afghan soldier just killed two of the lardass child killing vermin.

Two American soldiers have been killed in an apparent insider attack in Afghanistan’s southern province of Kandahar.

A US official, who asked not to be named, said initial information showed it was a “green-on-blue” attack (or an insider attack) — in which Afghan service members or militants disguised in Afghan uniforms fire on US or coalition troops, Reuters reported.

What democracy or freedom?? At gun point?? Thei destroyed the whole country…

the kurdish pricks in iraq Parlament are Blocking the law which would make US personal leave iraq. iraqi prime Minister is a weak moron. As prime Minister give them 2 weeks to leave or face attack by iraqs army which PMU is a part of.

the dysfunctional states of A won’t leave Iraq no matter what – too much oil and too much Exxon interests. casualties of american body bag fillings will be blamed on Iran and thus an excuse for dunny the dunce and his merry murderers to start something in Iran. won’t help them much but lockheed martin and northrup grumman et al will make a killing in the form of greater dividends and stock prices while the american tax payers will foot the bill – capitalism and perpetual wars is a wonderful combination.

You can be certain if the US was being pressured to leave Iraq then Isis would magically re appear as an excuse to keep them in.

Unfortunately, Russia will not sell military airplanes to Iran https://nationalinterest.org/blog/buzz/fighter-jets-denied-why-iran-will-never-get-any-russias-su-30-flankers-68547

No they don’t. They hope America to destroy Iran and block the Hormuz so Russia can be the largest oil exporter. Iran negotiates with Russia for years to purchase war planes, Russia is just stalling so Iran remain a weaker target for the US

Maybe, but also Russian people should do an Ukrainian style Maiden and get ALL the billionaires oligarchs out of their resource rich country. But they don’t even realize how poor they are. At least the Americans that support Israel are Rich. They don’t suffer like the Russian slaves.

Why constantly This Focus on Russia? The Terroristic U.S.A. Great Britain, ISISraHell, France & Wahhabistan are the FIRST BABYLONIAN TOWERS THAT HAVE TO BE BROUGHT DOWN IN A CONTROLLED DEMOLITION….the Bushes, the B.Liars, The Clintons & the Obummers can stick their heads in the Noose first….fuck the West! 2000 years of Genocides, Roman Imperial Catholic Church, Jewsuits, Torture, Massacres, Witchburners, Inquisitors, Starvation, Elitist-Scum, Global Extermination-Camps, Imperialists, Colonialists, Baby-Rapers, Paedophiles, Satanic Psychopaths, Supremacism, Lies, Broken Treaties, Destruction, Treason, a Dumbass Population of inbred Sheeples & a Whole lot more Extreme Filth…this is what the Fucking West stands for….I hope they go down real Fast…for they deserve every inch of it…

The countries you enumerated have a middle class, they are not poor suicidal people like Russians. Top country at natural resources = top country at suicide rates = top capital at billionaires/oligarchs. Russians are the real losers in this game. If the corruption is cancer for countries, Russia is the most cancerous country.

GREED IS A GLOBAL PROBLEM IN CASE YOU HAVEN’T NOTICED…

So you mean Russians are poor because they are not greedy or what’s your point?

You just made that point….good point had not thought about it in that way..

Russia has had its Long History of Bolshevik Khazarian Ashke Nazis…a Filthy Bunch of Parasites that still Preys upon Russia….Perhaps Russians should just Kill them all….

First I wanted to ask what you think about yourself, if you are poor because you are not greedy but I preferred the Russians example instead.

Ok, back to my ‘point’ you had spot, letting a bunch of billionaires from another ethnic groups to rule their economy, makes Russians naive or cowards?

Intelligent yet a little Naive…slightly Melancholic (especially after some vodka) & they love their Motherland Russia….They will march to their Deaths without a second thought to defend Russia…So They are Definitely NO COWARDS…Those Billionaires you constantly mention are mostly Khazarian Bolshevik Ashke Nazi Jews…Seize their Assets…Hang ‘em High…easy does it…Desperate Times ask for Drastic Measures…Exterminate Evil…

“they love their Motherland Russia….They will march to their Deaths without a second thought to defend Russia…So They are Definitely NO COWARDS… Those Billionaires you constantly mention are mostly Khazarian Bolshevik Ashke Nazi Jews…Seize their Assets…Hang ‘em High…easy does it…”

Can you spot how you contradict yourself multiple times in your own comments? Either you have a golden fish memory span and you can’t remember your previous words, or you are permanently drunk or you have schizophrenia. Chose one. Chose wisely :)

Can you read? Russia is divided in Two…just like the rest of this World…

I guess you can’t read your own comment because it’s too long and full of dots and caps lock. I can help:

:) Ok let’s try one more time, like for retarded kids that can’t count apples. I’ll be quoting from you using ‘ ” ‘.

“they love their Motherland Russia….They will march to their Deaths without a second thought to defend Russia…So They are Definitely NO COWARDS… ”

This above are brave Russian people you appreciate, right? Now this:

This are the oligarchs, right? But who are you talking with in this phrase? me, occupybacon that should hang em high blablablah? or the brave Russian people that should: “march to their Deaths without a second thought to defend Russia…”

Which would make them: “Definitely NO COWARDS… “

I was talking to the Brave Russian Folks….

Good to know you are not good at counting apples. So you were not talking in the same comment about the oligarch which are : “mostly Khazarian Bolshevik Ashke Nazi Jews…Seize their Assets…Hang ‘em High…easy does it…Desperate Times ask for Drastic Measures…Exterminate Evil…” ?

Russians are poor because they don’t steal like Americans and Israelis.

Compare the life niveau in Norway and Russia. And IF you do not understand, why I pulled out Norway, i will explain you.

Norway 5 million people with huge oil and gas reserves. Norway is comparable to Saudi Arabia UAE etc. Russia was pillaged to the bone by the USA when the Soviet Union collapsed and the US appointed a puppet government. Since Russia got the American monkey off its back the standard of living has been rising in spite of constant American attacks.

Russia is sittung on much, much guger gas reserves. Plus oil reserves, aluminium and lot of other resources. Russia should be on the level of Germany if were use the resources for the country. But in Russia the government and oligarchs steel the money. Nothing new. In tsarism were boyars, under communists the Party, now the oligarchs. This is the reason, why was and is russia always poor. Mainly the citizens. And for futere there is no chance to change.

So, the normans are clever, the russians stupid.

And every nation that is richer than Russians is because they steal?

The Russians aren’t poor. Your fake Ziostatistics are lies.

I dont think they are so stupid.Russia is to weak to battle USA and some Eu fuckboi states, and She needs China and Iran as Allies..

If the US and Russia went to war, I think that Russia would stop a lot of American ICBM’s, but the US would stop very few Russian ICBM’s. However it would be very messy and the death toll in Europe and the US would probably be nearly a billion dead.

It’s true, Russia will not break UN sanctions. The sanctions are due to expire in I think 2021, then Russia will sell planes to Iran.

Always The Law Abider ,Russia ,like the virgin beauty fighting off the bfutish rapists with showing of the Cross. As of that will be enough to help!

Russia is unable to sell any fighter planes because as part of the nuclear deal JCPOA there is a UN resolution in place until Nov 2020 which prohibits the sale of offensive weapons.

Meanwhile Russians shamelessly criticize Europeans for mimicking willingness to bypass US sanctions, in fact just trying to keep Iran with hands tight, while they (Russians) doing the same thing. USA attacking Iran and blocking Hormuz strait oil flow would be like a lottery win for Russian economy.

absolutely, this is not your country USA, they are telling you to leave, so leave

USA are blocking Al Tanf..it is to say the main road Damascus-Bagdad…and are training terrorist with the purpose to attack SAA soldiers and also Shia militia inside Syria!…also to support israel which have attacked PMU 2 times!

Absolutely, the US needs to get out of both Syria and Iraq. .