An unknown missile struck a command tent of the Iraqi Popular Mobilization Units near the Tal Afar airport. As a result, several servicemen were wounded. 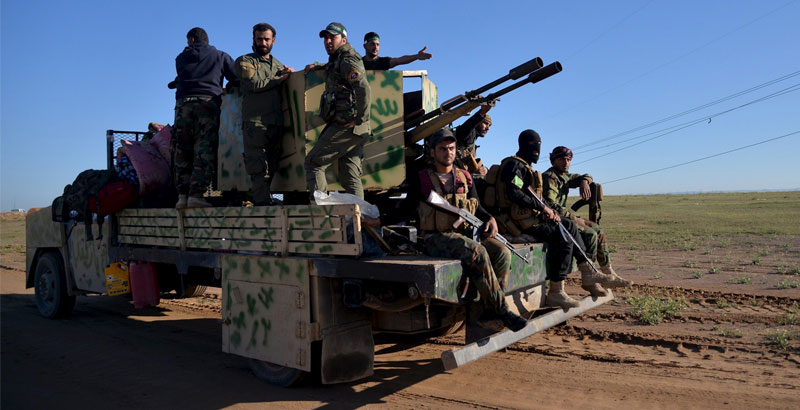 Members of the Hashid Shaabi Shi’ite milita gather in the west of Samarra, in the desert of Anbar, as they prepare to depart for Mosul to fight against Islamic State, March 1, 2016 (Photo: Reuters / Stringer)

A command tent of the Iraqi Popular Mobilization Units (PMU), also known as the Hashd al-Shaabi forces, was hit by an unknown missile, the PMU reported in a statement on Friday. According to the statement, the tent was located on the territory of the recently liberated Tal Afar airport, and the attack took place on Thursday, after a meeting between Iraqi Prime Minister Haider al-Abadi and military commanders was held there. As a result, several servicemen were wounded.

According to the statement, a specially created investigative committee has already examined shrapnel of the missile and determined that not the Islamic State (IS) terrorist group launched the laser-guided rocket.

The PMU statement also revealed that the missile landed one and half meters from the tent of PMU commanders. At the same time, an unmanned aerial vehicle, belonging to the US-led coalition, was spotted in the sky.

The Popular Forces called on the US-led coalition to provide an explanation for the incident, adding that it will announce its own investigation findings after it to be finished.

On Saturday, a merger of the PMU and the Iraqi Army was approved by the Iraqi parliament. The development was hailed as a national event by chairman of the Islamic Supreme Council of Iraq (ISCI) Ammar Hakim.

Meanwhile, about 400 Iraqi families, which were used by the IS group as human shields in western Tal Afar, were freed by the PMU, which also managed to liberate three villages in the region, killing a large number of terrorists.

Wouldn’t be surprised if it turns out to be an American Air-to-Ground missile.