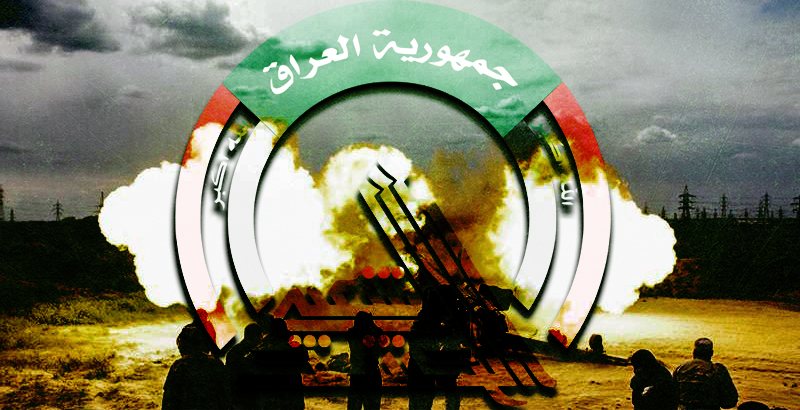 The Iraqi Popular Mobilization Units (PMU) announced late on August 22 that its air-defense units had opened fire at a reconnaissance unmanned aerial vehicle (UAV) that flew over one of their bases near the Iraqi capital, Baghdad.

“The air defenses of the PMU’s 12th Brigade targeted a reconnaissance UAV that was flying over the brigade’s headquarters in Bagdad’s belt,” a reporter of the PMU’s media wing said.

The reporter added that the air defense fire forced the mysterious UAV to move away from the 12th Brigade base, thus “foiling its mission.”

A day earlier, the PMU’s deputy commander Abu Mahdi al-Muhandis held the U.S. and Israel responsible for the recent explosions that rocked several ammo depots of the Iraqi force. Al-Muhandis also vowed to respond to any future attack.

“We informed the [Iraqi] Joint Operations Command that we will consider any foreign warplane that would fly over our headquarters without the knowledge of the Iraqi government a hostile warplane and we will deal with it on these basis,” the PMU’s deputy commander said in an official statement.

The U.S.-led coalition had rejected the Iraqi force’s accusation, but provided no explanation on how these attacks were carried out.

Today’s incident confirms that the PMU is determined to put an end to the attacks that targeted its ammo depots over the last few weeks..

Didn’t the Iraqi government just recently announce that all lights have to be approved or they will be treated as a security risk and shot down. Looks like their statement is all hot air.

The US told the Iraqi government to disband the PMU; because the Iraqis government refused hence the bombings, doesn’t matter who did it, jews or US the Iraqi sovereignty has been violated and the US is held countable since they have bases in Iraq.

Sorry but I couldn’t help but laugh at your statement but not in meanness. Iraqi sovereignty has been violated for what, 16 years now? And the U.S. is definitely at fault.

Yeah, I get a giggle out of that statement also; I only repeated what the Iraqi are stating. Yeah, the irony!

It’s mission sadly was completed. This also shows that the PMU has no ability to down even a low flying visible UAV. They must have fired anti-air rounds at it, no anti-air missiles available. Iraq is ultra weak on radars. Iraq cannot police their own sky’s at this time at all. Iran needs to step in and first secure Baghdad and the North Eastern parts of Iraq. From there air defense can be expanded over the next two years to include around 50%-60% of Iraq.

Nope, go to russia for genuine russian hardware, its the only way to be sure…

Due to FACT that Iran, Iraq and Syria with a combined population of over 130 million people have not retaliated against the Zionist scum only emboldens them and next they will attack Yemen to support their Saudi pimps.

Israel gearing up to attack Houthis in Yemen: Report

The Zionists will attack the AnsarAllah next as they have faced no retaliation and that has only emboldened them. This state of pathetic affairs simply can not last.

Eh, just give it time. They’ll be supplied with proper AA equipment by the Iranians, and the airstrikes won’t be as effective.

Not sure, so far Iran has suffered hundreds of casualties at Zionist hands and done nothing and that has emboldened the Zionists that they have placed spy planes in UAE pimpdom.

But Zionist participation wiht Wahbabi puppet regimes is not limited to intelligence. “For two years now, Israel has been the only country in the world killing Iranians,”said Minister Tzachi Hanegbi in an interview on July 21, two days afterthe first attack in Iraq. “We have hit the Iranians hundreds of times in Syria. Sometimes they admit it; sometimes foreign publications expose the matter. … But everything is a coordinated policy.” Hanegbi was then asked what would happen if Iran tries to hit Israel back. He answered, “The Iranians are very limited in their responses, and it’s not because they do not have the capabilities, but because they understand thatIsrael means business.” By the way, it is worth noting that Hanegbi’s official title is Minister for Regional Cooperation.

Israel has real air power, Iran has nothing, the roller of Iran are scared that the will be Iranian pilots will attack them!

When it comes to Israel, the Iranians are paralyzed by fear. But that doesn’t stop them from complaining against the Russians. As if the Russians were obliged to fight Iran’s wars.

I wouldnt call it fear its more like pragmatism – they understand they are outclassed in all the military tech areas Israel can deploy so its pointless going ahead to ahead, their approach seems to be asymmetrical & use of proxies.

Bearing in mind Iran has not upgraded its airforce since 1979 it is no match for Israeli air power or even any modern airforce in the region. The UN resolution on arms imports is due to expire next Nov 2020, unless renewed Iran will be free to buy new modern fighters.

True, the mullahs are scared of the rag tag Iranian airforce. The mullahs are illiterate morons who don’t understand strategic mass, Iran, Syria and Iraq combined can destroy the Zionists in a week if they act. So far they have been cowardly punching bags.

And the Iranians will do all this with their inferior technology. Yeah sure (-; No Russophobic comments today?

DaJew is thirsty for blood everywhere….

The Israeli military is planning to attack Yemen’s Houthi Ansarullah movement, a new report says, a move that is claimed to be part of the Tel Aviv regime’s attempts to ensure the group never comes in contact with Iran.

The Kuwaiti newspaper al-Jaridah said Thursday that Israel was gearing up to pound targets of the Ansarullah and Lebanon’s Hezbollah resistance movement in Yemen, near the Straits of Bab-el-Mandeb separating the Red Sea from the Gulf of Aden.

The report claimed that the Israeli spy agency Mossad as well as the regime’s Military Intelligence were specifically looking for alleged attempts to deliver weapons from Iran.

It further claimed that some of the Houthis’ drones and missiles had been transferred to Iraq instead in an alleged attempt to mislead the Israeli military, which is said to be behind a series of bombings that have targeted Iraqi popular mobilization forces, Hashd al-Sha’abi, over the past weeks.

According to al-Jarida and some Iraqi experts, the attacks on the group’s ammunition depots across Iraq have been carried out by Israel.

This falls in line with remarks by Israeli Prime Minister Benjamin Netanyahu, who did not reject a reporter’s questions about whether Tel Aviv was operating in Iraq .

“We are working against Iranian consolidation – in Iraq as well,” he said in an interview with Israel’s Channel 9 News broadcast on Thursday

So true, and it is that tendency which will be their undoing. Their leaders are incredibly short-sighted and stupid in a very fundamental way.

These attacks may be originating in Iraq. If the Jews hit the WTC on 911 from American soil. They’d have no problem doing the same thing to Iraq. Mossad and the IDF are embedded with US forces in Iraq. And the US knows exactly where these attacks are originating from and is complicit in them. Which is why US forces need to be removed from Iraq completely.

Sunnis and Kurds are not against US,

Traitor to their country working with the USA and the jews to destroy Iraq and Syria to steal land! Bomb all kurds too or sent them to israel! If they love them so much!

Seem like they fulfilled the promise. This War in middle east and subsequently around World isn’t going the way Americans, Zionists and Wahhabis would like to see.

Kick the USA out! i cant understand why the government of Iraq is allowing that!

as if they can make the u.s. to leave …. the iraqui armed forces is weak .

you just have to replace them if you are weak! Can you follow me?

Do you have proof of that, I haven’t seen it.