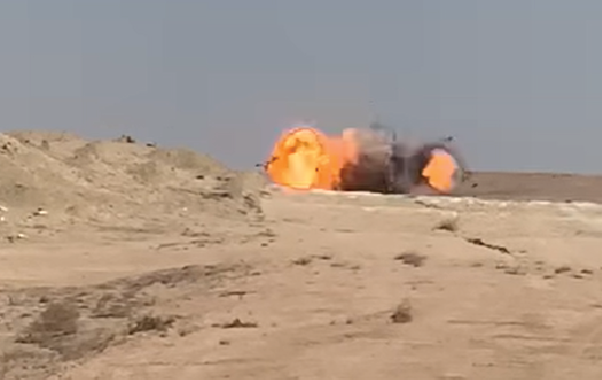 On June 9, the Ministry of Defense of Iraq announced that the Military Intelligence Directorate had thwarted a terrorist attack with a vehicle-borne improvised explosive device (VBIED) in the western province of al-Anbar.

“According to accurate information provided by the Military Intelligence Directorate to its affiliates in the Intelligence Department of the Al-Jazeera Operations Command, the presence of a VBIED hidden inside a hideout in the village of Muhairija in the Rawa desert, which was intended for use in carrying out a terrorist operation in al-Anbar province, was confirmed, thus a detachments of the Military Intelligence Division in the 7th Division, moved with the support of a force from the 3rd Regiment of the 8th Infantry Brigade, where the hideout was raided and the VBIED seized,” the ministry said in a statement.

Engineer units of the 7th Division moved the VBIED to an open, empty area, where it was detonated in a safe manner. A video of the operation was shared by he Iraqi MoD.

The VBIED was most likely prepared by ISIS cells. The group’s terrorists are highly active in al-Anbar, whose desert is known to be the historical stronghold of the group in Iraq.

In the last few months, the terrorist group carried out a number of bombings in different parts of Iraq, including the capital Baghdad. Iraqi government forces are taking action against this threat. Last April, a VBIED was uncovered and destroyed in al-Taba’at airport in al-Anbar.

A good job for jens. If he can complete 13 successful suicide missions he can retire as an Emir with all the trappings that entails. I am sure after his first attempt he will get to enjoy the adrenaline rush. Go on jens , I believe you can do it.