The head of the Kurdistan Regional Government has announced preparations for a referendum on independence of the region from Iraq. 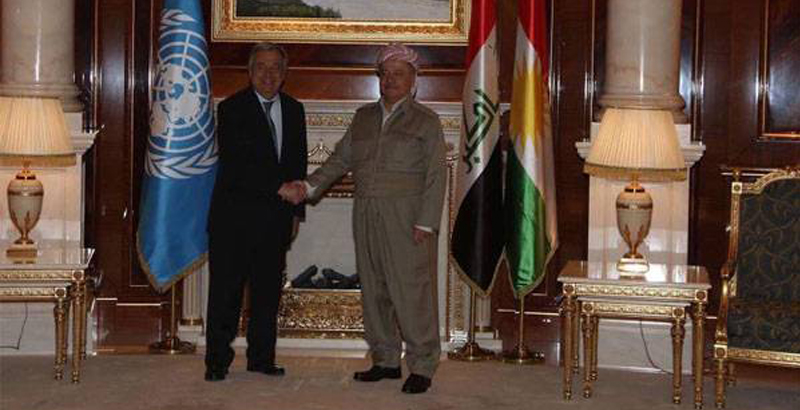 During a meeting with UN Secretary General Antonio Guterres, head of the Kurdistan Regional Government (KRG), Massoud Barzani, has announced preparations for a referendum on independence of the region from Iraq. According to Barzani, “the referendum, which is the highest form of democracy, will be held in Iraqi Kurdistan in the near future.”

Barzani noted that the international community should get to know about the Kurdish people’s opinion.

Iraqi Prime Minister Haider al-Abadi commented on these statements. According to al-Abadi, “separation of Kurdistan from Iraq does not meet the interests of Kurds.”

“Not only Iraq, but also Turkey and Syria, where a large number of Kurds live, oppose the aspiration of Erbil [the administrative center of Iraqi Kurdistan] to its sovereignty,” the Iraqi Prime Minister said.

About 7 million ethnic Kurds live in Iraq, while the country’s total population is around 36 million people. Since 2005, Iraqi Kurdistan has the status of an autonomous region within Iraq. This status is prescribed in the Iraqi constitution. It is quite probably that if Iraqi Kurds vote for the independence, Turkish Kurds, whose number is about 17 million without taking into account Kurdish refugees from neighboring Syria, will try to use the precedent.

The day this Kurdish referendum is held or shortly afterwards Turkey will declare war and attack the Kurds in Syria and Iraq with the help of the Syrian and Iraqi governments and if the USA tries to interfere on orders from Israel, expect them all to attack all USA troops on their own territories territory.

and the USA will back down under orders from its Israeli master, for fear of Israel being attacked, by Turkey and Syria as all of America will be destroyed before one Jewish fingernail is broken. Israel is Americas master Turkey, Syria,Iraq, Russia, China Iran know it and as racist supremacist Zionist Henry Kissenger says referring to American soldiers as “Soldiers are dumb stupid animals to be used as cannon fodder in our wars”- is happy to see Americans die for Israel, but does not want to see Jews die for Israel. http://www.theresnothingnew.org/index/Veteran_039;s_Day

It’s just the Iraqi Kurdish region which will hold the referendum. It’s leader is on quite good terms with Turkey, to the point that he’s basically Erdogan’s puppet. The relations with the Syrian Kurds and Turkish Kurds are quite strained, to the point of almost being hostile. Turkey will probably not only recognize the independence of this region, it will probably even declare itself protector of its region. After all, it will get access to all the oil of this region, it could now station troops there to fight against the Turkish and Syrian Kurds, which so far Baghdad has always protested against.

The only way I can think of where Turkey will support the Kurds leaving Iraq is if they become part of Turkey and this will not happen. If Turkey supports it then the Kurds in Turkey, the vast majority of Kurds over 14 million, will rise up and fight for independence and there is no way Turkey wants to be partitioned a part of the Yilon plan.

If Israel was so confident of this outcome you have mentioned, Israel would not have tried to overthrow and kill Erdogan last summer

While Israel would probably welcome an independent Iraqi Kurdish state (possibly as a base to use against Israel) you only have to look at how chummy Barzani and Erdogan are. Methinks that if Barzani thinks he can get away with declaring independence from Baghdad its because he’s gotten the green from Ankara.

Because lets keep things in perspective, the Turkish Kurds who are fighting against Ankara belong to the PKK. Erdogan wants to crush the PKK and the YPG which he considers PKK in all but name. Barzani considers the PKK as a rival at best and an enemy at worst. The PKK is active in Iraq too and the Turks regularly cross the border to bomb and attack them there. Usually followed by protests from Baghdad, but never from Barzani. Methinks if Iraqi Kurdistan were to declare independence Barzani would immediately ally himself with Erdogan to send a military force to help fend off any potential invasion from Iraq. And in doing so give Erdogan a complete free hand to strike at the PKK wherever it is in his area.

While it may look good on paper for the Kurdish movement to have a Kurdish independent state created out of Northern Iraq, in practice it will probably be as credible to most Kurds as Ramzan Akhmadovich Kadyrov is as president of Chechnya

Like I said you are dreaming and your own example proves my point Mossad. Chechnya is part of Russia, get it?? The only way northern Iraqi Kurds are allowed to break away from Iraq by Turkey is if it becomes part of Turkey as Chechnya is part of Russia and Turkey gets most of the money from the oil, not Israel and not the Kurds. Erdogan understands the Yilon plan from Nigeria, Libya, through Somalia, Syria Egypt, Iraq Iran Ukraine etc., which is why he is having the referendum for more powers and why Israel won’t allow his ministers to campaigning in the Netherlands and Germany to get the votes (which seems to be backfiring by the way) and powers he will need to leave NATO and oppose the global Zionist, Israeli, racist supremacist, empire and prevent the destruction of Turkey.

If he understands the need to control the central bank of Turkey and Turkey’s currency, he will succeed with allies like Russia and China. I know China gets it for sure.

Again if Israel was so confident of its plans for an independent Kurdistan (which is on the maps of the Yilon plan along with a carved up Turkey) and what Erdogan would do about it, they would not have tried to kill and overthrow him last summer. It’s not so hard to figure out Mossad. The MOSSAD is dropping the ball a lot these days as it gets infected with its own corruption. The collapse of the Zionist empire is near.

Thanks for making me laugh. It must be very comforting for you to live in a world where everything is controlled and happens according to the plans of Israel and its cronies. Because then at least sheer random chance and chaos do not factor into anything. There are no powerful people making the same stupid mistakes we all do. There are no scary event. Its all just the damn jews and their deep state cronies.

Now, if you excuse me, I will go pick up my monthly Mossad check, I hear there’s a new iPhone coming out.

barba Papa Sometimes chaos does factor into things. However Jews are the powerful people in charge today because they control the currencies and can create as much money as they want out of nothing. I can give 10,000 examples of this power no problem, but I will just give just one which is even on video for you. If you still doubt you are a Mossad agent or just hopelessly brains washed so fact and reality won’t matter to you. If Juries had the same attitude as you no one would ever be convicted of any crime. It’s just a coincidence that Jews end up with all the money and power.

john brow, you have already died on the battlefield. what are you doing here??

Solomon try not to make it so obvious that you are a Mossad troll.

They are gonna want it back…

Yes. Foolish Kurds! Trump will walk away from them and rightly so. Let Iraq, Syria and Turkey smash them to shut them up for once and for all.

I hope these Kurdish people get their freedom. They have suffered for generations from all sides. Originally, all these lands used to belong to Asyrian people who are still there and Kurdish people but, the Arab Muslims, invaded their land all the way from syria to the rest of regions. The Turks, came in the 1100s but before that Turks were only in Afghanistan, Uzbekistan and Turkministan region. Yet Both the Turks and Arab took their land and showed them no mercy. Now hopefully finally they get back their land back after such a long and cruel history.

Too late, the horse has already bolted ?

I only care if they defend abortion rights, which so far they have not done like in Rojava. Though they will get abortion rights if Turkey invades and annexes like Brown predicts. I guess abortion rights are more likely with an independence vote than without, so Hooray!

Get lost , stupid BABY KILLER J Cohen.!. whatever your fiction name is.

Get your sick mind out of here.. Your mindset should be aborted along with your Baby Killing urges, piece of garbage of Satanist you are.

Burn in Hell along with other useless scum on earth!

Creation of landlocked country surrounded by hostile and actually quite angry and revengful countries with quite sizeable armies….