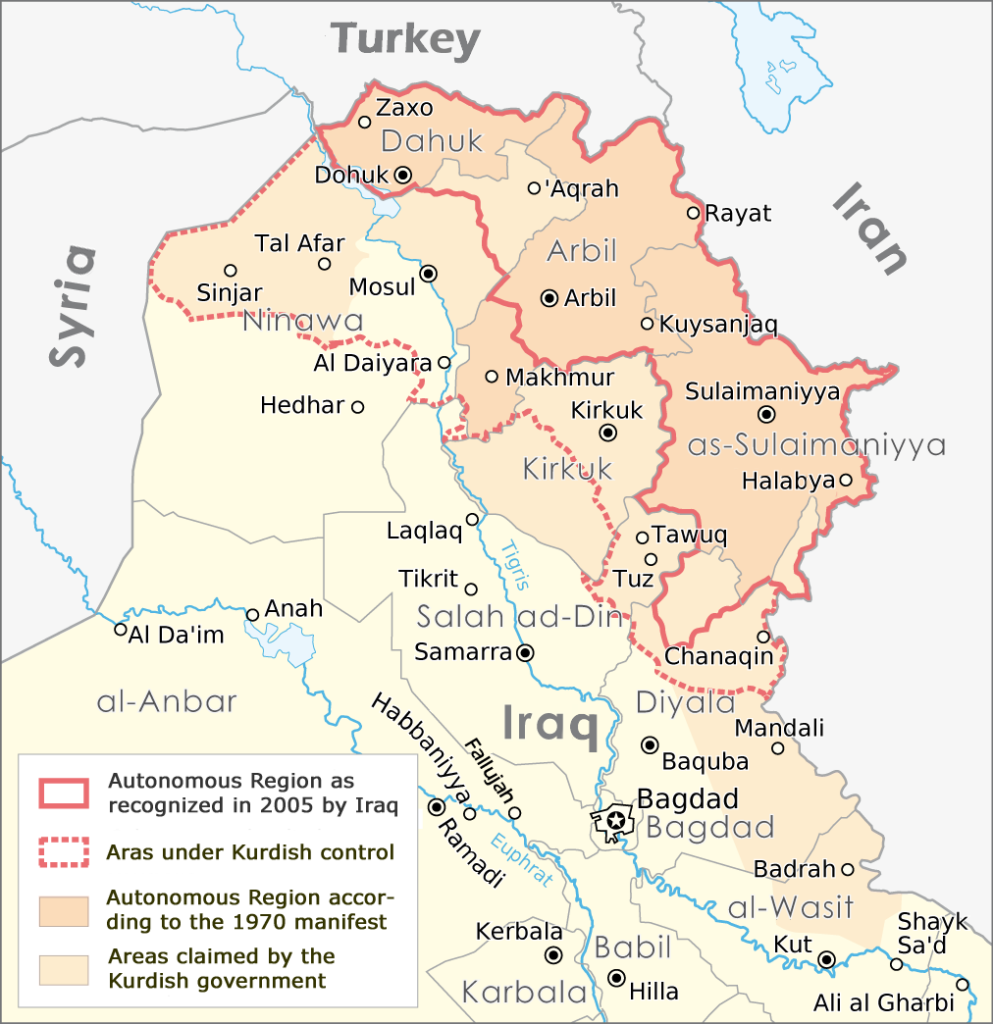 This map provides a general look at the disputed areas and the administrative borders of the Iraqi Kurdistan. Click to see the full-size map

The Kurdistan Regional Government (KRG) have reportedly reached an agreement with the Iraqi Federal Government over the contested areas in northern Iraq.

According to Sky News Arabia, the Peshmerga, a military force of the KRG, agreed to return to 2003 Iraq borders. Sky News Arabia didn’t provide the soures of its info.

Earlier this week, the Iraqi Army and its allies took back Kirkuk city, the nearby K1 military airbase, the city’s airport and the nearby oil fields. Then, government forces establsihed control over the city of Sinjar and some other villages and towns including the Rabia border crossing with Syria.

However, if Sky News Arabia’s report is confirmed, the Peshmerga will handover a large area to the Federal Government, that it had seized during the war with ISIS.

Thus, the government will regain control over all oil fields near Kirkuk and other disputed areas as well as an important pipeline heading through the northern Iraq. 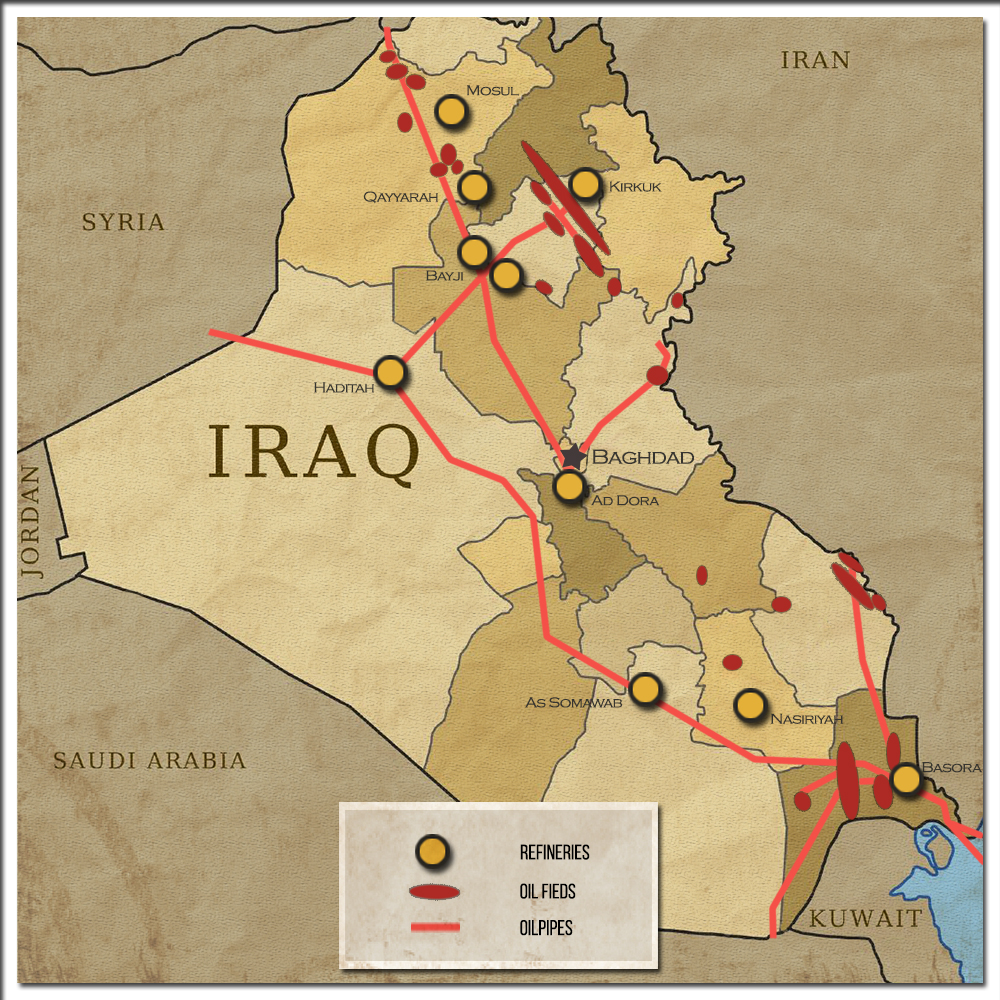 “What happened in Kirkuk city was the result of unilateral decisions of some persons within a certain internal political party of Kurdistan, which eventually led to the withdrawal of the Peshmerga forces,” he said. 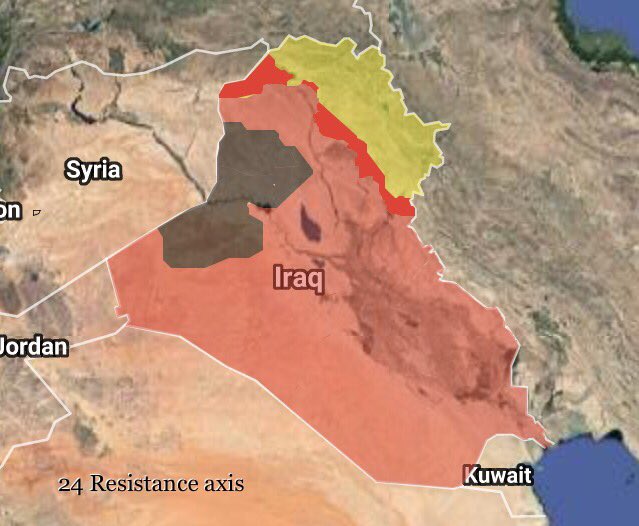 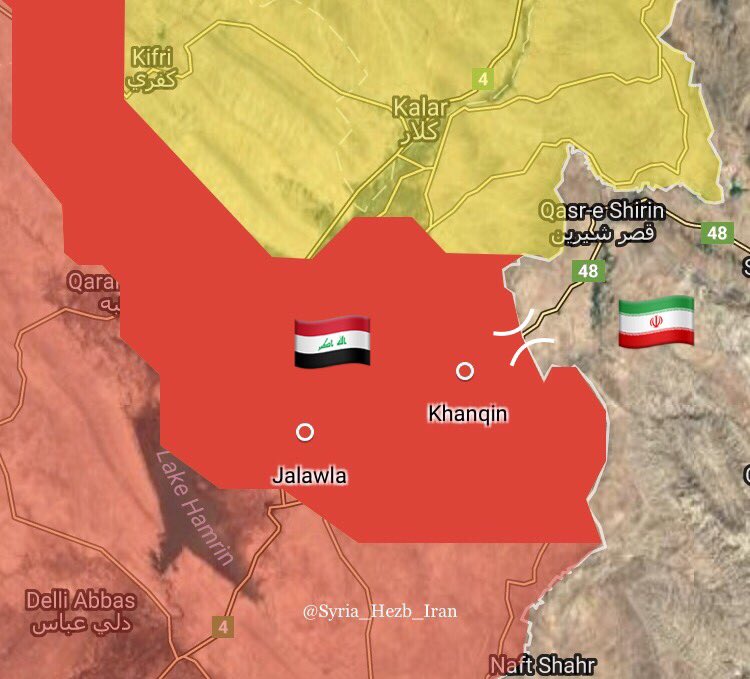 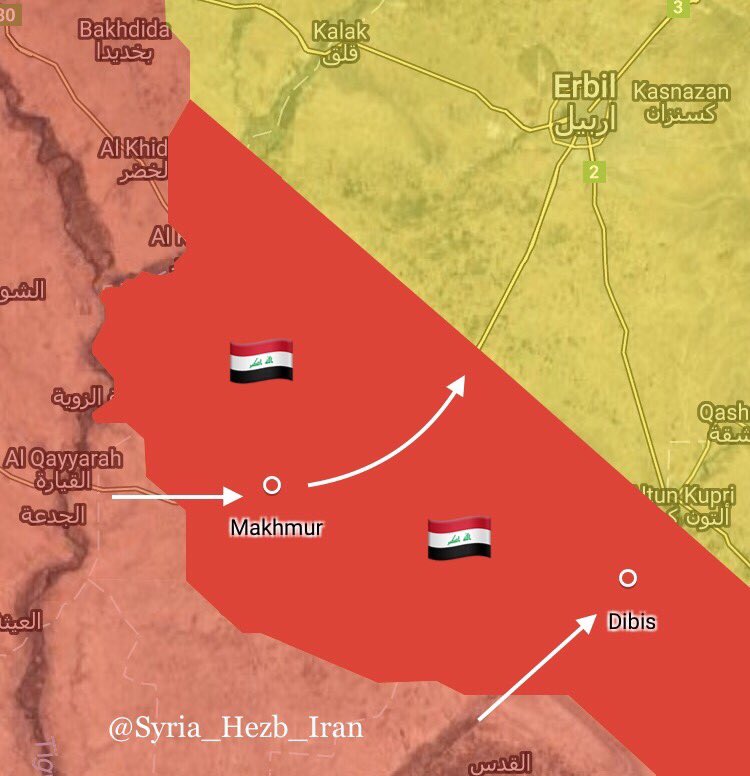 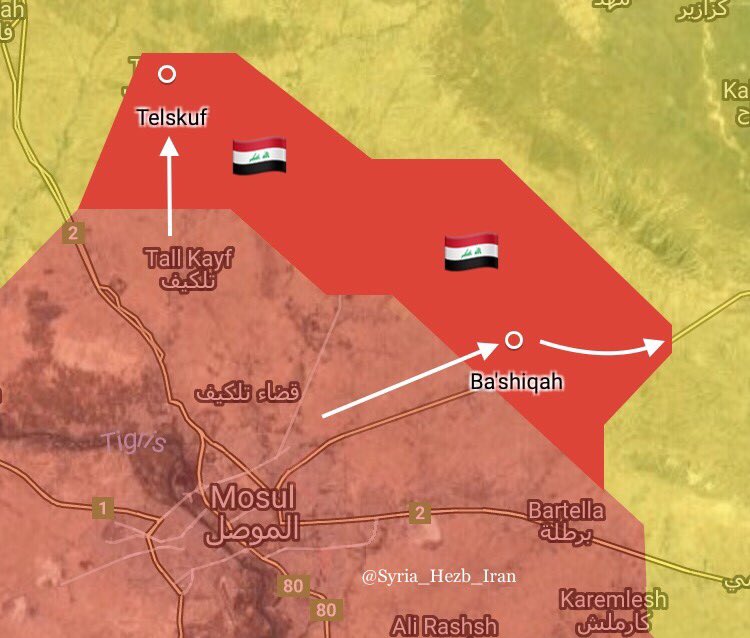 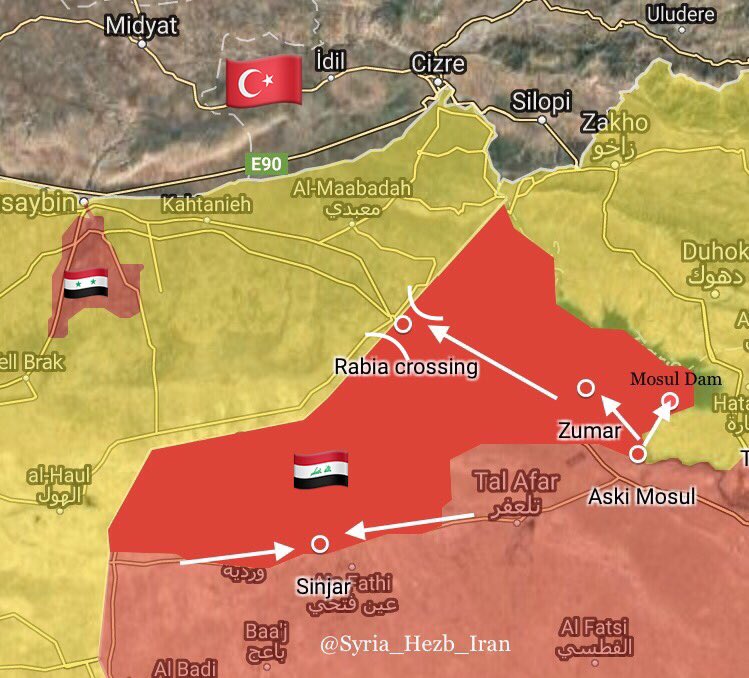 sure, the kurds are not members of a death cult

notice Iraq Kurd border shared with Syria = precisely zero. This has implications for the SDF etc. in Syria.

The Kurds might still hold the Semalka crossing on their side of the Tigres river at top of map, but this is listed as pontoon bridges ?

haha good, GET BACK IN UR HOLE KURDS!!! LOL

It appears that the Kurdish referendum has completely backfired. How about that ! HAHA

The Pashmurga don’t want war with their brothers.

they shouldn’t run their mouths then

They had no problem in stealing their brothers though…

They were fighting each other for decades

The YPG now knows the value of US aid. Worthless and even less. They are nothing but a bunch of troublemakers.

Do you think the US military should have supported this blatant land grab against the Iraqi government they themselves created from the ashes of the administration under Saddam? This referendum was a bad idea, but it was even worse to do so after engaging in land seizures following the defeat of ISIS in the area – it actually meant that the Baghdad government had to come in and assert their military and political authority to prevent a total collapse of the central government. The US only does what is good for the rich people over there – they don’t much care who operates the oil fields, only that they get their cut.

The idea of the US and Israel is to increase sectarian tension in the region. Anything that increases this is good for them. This spectacular failure will however teach these extremists around Barzani a very big lesson. Their dreams of a new sectarian state is finished. Just as the one in Catalonia. So obviously this plan to divide Iraq ended in a disastrous failure. Jo Biden and the other zionist thugs have lost. Now lets hope Iraq gets back on its feet and throw these US advisers out of the country. And let them take Barzani and his clan with them. The sea over there is deep enough.

Well, that was fing easy. Syrian Kurds are made out of same breed also, their time will come.

It shows how fake the Kurdish referendum was and that the Iraqi Kurds in majority choose to live as Iraqi patriots. Syrian Kurds should take note because they have no other viable realistic alternative.

The central government needs to move to Erbil and arrest Barzani and his Zionist accomplices for high treason. This will put an end to his feudal rule over the Kurds.

Perhaps the Kurds themselves will arrest him and his sons and turn them over to Baghdad.

Maybe a knife in the ass like poor gaddaffi.

So much for taking Baghdad by storm… I think this is a positive development, especially for the Kurdish peoples. The last thing the region needs is an ethnic war, encouraged by the Zionist entity and US spooks – Kurdish autonomy in Iraq is the best deal that can be had, at least until all the “coalition” occupiers are gone and their paid terrorist mercenaries killed or jailed. Also, I think if any group in the region deserves to have their grievances settled it would be the Palestinians – often forgotten by so-called “activists” and “revolutionaries” in the Middle East. The Zionist leadership must decide – either they become a virtual fortress surrounded by enemies, but racially “pure”, or they accept the return of the state of Palestine, with equal rights for all races and religions and international protection for historic sites. Once that is achieved (because I think the first option is doomed in so many ways) the issues of reparations can be dealt with, and, most importantly, criminal trials for the likes of the comb-over commandante himself: “Bibi Netanyahu”. I salute those of the Kurdish leadership who saw sense and put a stop to the notion of trying to create a kind of ethnic “caste” of Kurds to rule over large swathes of Iraq (not to mention other nations). There is no question that an attempt to do such a thing would have lead to a bloody war benefiting no-one except the bloodthirsty “Israelis”.

Contrary to “Western” (Israeli) media narrative: this is a very positive development for the Kurds. They need to be freed from PKK/SDF/YPG terrorists and Barzani feudalism.

I agree. That was partly my point – the Kurds will be a lot better off under a strong Iraqi government than as an “Israeli”-style siege camp with a large population of non-Kurds who would end up being treated much like the Palestinians. I suspect that some emissaries from Iran (and possibly Russia) have had a few meetings with Baghdad and Erbil, explaining the likely outcomes of such a move. Certainly, occupying Kirkuk and including in the referendum was a particularly stupid idea. These ethnocentric and secessionist tendencies need to stop for the unity of these nations – especially after so many years of invasion and terrorist subversion.

as
Reply to  Lex

Barzani clan is the former lead of the Kurdish militia organized and trained by mossad to use against Iraq in support of Iranian shah.

Zionists are as Racist-Fascist as the Nazi were

Educated and Intellectuals minority is against it, particularly the Jews and Israeli Noam Chomsky, considered the living greatest thinker is a good exemple of it !

Einstein grow up in Switzerland, none intolerances is the Protestant only dogma. Einstein was known to find Zionism disgusting !

Israel is very disappointing doing the opposite of what everybody was expecting. They assassinate at once James Forrestal and Prince Folke Bernadotte in charge by UN to create Israel…

Israel was created by terrorism, and will disappeared by Terrorism

Yes that is what i am saying.einstein was against zionism as are many jews out there.problem is ,those in power in usa and israel are hard core zionists.

In France Zionists are vey strong to, it’s a contagious sickness !

In France Zionists are vey strong too, it’s a contagious sickness !

Thank you. Very good and informative interpretation. Welcome to the community. Asking for permission. I’m going to follow you, if that’s all right.

European medias are all under Zionist control and Muslim bashing is their Doxa, almost never speak or write about Palestine !

From Syria to Burma? http://www.voltairenet.org/article198176.html

The Kurds: Washington’s Weapon Of Mass Destabilization In The Middle East http://www.voltairenet.org/article197437.html

There is no war. The Peshmerge are withdrawing to the pre-Mosul operation borders. It was all a big fucking show.

Barzani doesn’t want to admit that a forced agreement was reached with the Iraqi govt. I think :)

Hahaha! There was an agreement, to retake Kirkuk! Kurds just took it back. And people fought and killed the Hashid! Qassim suleymani ran for his pussy life! The civilian population all came to fight to the death. The only way you defeat us is to kill every Kurd! The Hashid is laughing stock now, so are the Iraqi army! ??

The turkomans in Duz xurmatû will pay a heavy price for looting people’s houses and burning it. The Hashid will pay very dearly. We killed many of them, and killed on of their leaders. Once again the Kurdish flag flys high in Kirkuk. A city that was, is and will always be Kurdish. So each and everyone of you racist, bigoted fascist scums can go an bang your head against the wall. And Israel was just speaking to Russia on Kurdish independence. Haha! Looks like Russia doesn’t give a fuck about the Iranian ducks. We’re coming for Northern and Easyern Kurdistan as well!

Hashid is the enemy. Simple!

US Congress is angry at this development and immediately push resolution that could support Kurds in some way. Though by this quick agreement they’d lost the initiative to do so.

The US supports the Iraqi Government and have without a doubt betrayed the Kurds. Imo the Kurds learned this lesson the hard way.

Which is simple never became puppets for anyone. The Iraqi gov’t will learn the same fate sooner or later

Well done Kurds, you did the decent thing in the end.

Moon Of Alabama has a great article on what actually happened.

Here is an excerpt: “The Barzani family clan is only one of the powers in the Kurdish region of Iraq. Historically its main competitors are the Talabani clan. Both clans control their own political parties (KDP and PUK) and militia. Both had been fighting against each other during a civil war in the 1990s. Then the Barzanis called in help from Iraqi president Saddam Hussein to defeat their local enemies.”

“Over the last decade the Talabanis were handicapped by their ailing patriarch Jalal Talabani. After the U.S. invasion of Iraq he eschewed a major role in the Kurdish region in exchange for the ceremonial position of a president of Iraq. When Jalal Talbani died on October 2 his family immediately asserted its position. It negotiated a deal with the central Iraqi government to reign in the Barzanis’ quasi dictatorial powers. “

I suspect the Kurds are only too happy to retreat. I further suspect that they’ve been becoming very uncomfortable about carrying out a speculative campaign against the Syrian / Iraqi governments at USA’s behest, with the potential to lose big. Not that the US of A cares. I also suspect that the Syrian government are very happy to have Iraqis rather than Kurd / US occupied areas as neighbours.

finally some sense to the empty heads of Iraqi Kurds….

Good illustrations. And shias take all in the best Saddam style and has found clorine for gas up there too.

Where is dutchnational … ? Is he still around here … ? I wonder what his thoughts are now ….

What about PKK/SDF/YPG in Sinjar ? They say we still have control on Sinjar