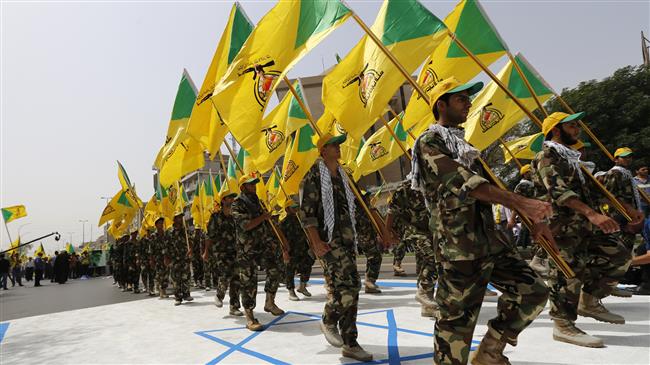 Members of Kata’ib Hezbollah walk along a street painted in the colors of the Israeli flag during the annual Quds Day parade in Baghdad. (Photo by Reuters)

Kata’ib Hezbollah (KH) was reinforcing its military positions in the southern countryside of Syria’s Deir Ezzor, the Syrian Observatory for Human Rights (SOHR) reported on August 20.

According to the London-based monitoring group, KH fighters are currently building fortifications around their positions in the outskirts of the city of al-Mayadin.

“They [HA fighters] have raised dirt barriers, and placed cement roadblocks near their deployment points in the region’s desert,” the SOHR’s report reads.

These new defensive measures came after a series of attacks by ISIS terrorists on the southern and western Deir Ezzor countryside.

On August 15, ISIS cells ambushed fighters of Liwa al-Quds and the Syrian Arab Army 4th Division in western Deir Ezzor. At least one pro-government fighter was killed. Three days later, a Russian convoy was attacked in southern Deir Ezzor. A Russian major-general was killed and two service members were injured. ISIS was reportedly behind the attack.

ISIS terrorists are launching attacks on western and southern Deir Ezzor from their hideouts in the Homs desert, which lays in the central region.

The defensive measures taken by KH will likely help secure al-Mayadin. Nevertheless, much more is needed to be done in order to eliminate ISIS threat.

Indeed, many of the Sunni tribes have also joined the PMU and Kataeb Hezbollah and they are also receiving precision missiles named after their Martyr Abu Mahdi al-Muhandis” is a cruise missile with a range of 1,000 kilometers and GPS guided NOE ground skimming capability. So much for the Zionist cunts “removing” Iran from Syria ROFLMAO!.

The IAF strikes are a failure if the objective was to get Iran or its militia out of Syria. This looks like they are strengthening.

Want to know something funny? before the Anglo /Zionist thugs started the war there WERE no Iranians in Syria https://media2.giphy.com/media/l46Ci0FmyPbN5GMSc/giphy.gif

Iran and Russia were invited by the legitimate government of Syria to protect their country from US sponsored terrorists. Russia and Iran both have defence pacts with the Syrian Arab Republic and historical ties. US has no business meddling in Syria.

Look, most of you are intelligent people who understand that the whole Americunt and Zionist narrative is based on Hollywood fantasies that may work on Wahhabi Bedouin cunts and other brainwashed idiots, but Iranians know that the Zionist cunts are weaker than a spiders web and simply don’t have the strategic mass or military capability to take on Iran, a country several times their size, despite unlimited western charity the Zionist are cowards are casualty averse and don’t have the skills or the manpower to fight a unlimited asymmetrical war spanning 2 million sq kms. Hezbollah proved that in 2006. Firing a few million dollar stand off missiles from the Lebanese coast at empty mud huts is hardly going to get people as cool and determined as the Iranians to leave Syria, Iraq or any Shia majority area is a idiotic and delusional fantasy. There are now over 200, 000 Iranian allied forces in Syria and Iraq now and they are not about to anywhere.

The US with the largest airpower in the world has been bombing Iraq and Afghanistan for over two decades and not having much luck either. Zionists with a few dozen planes don’t stand a chance.

Only boots on the ground win wars.

History is following its course, the decadent and never realized Anglo-Zionist unipolar domination will have to be stepped aside, the only doubt is whether it will do it with a bang or with a soft whimper.

the yankee-twats are meetinf serious opposition on all fronts and will have to either up their game or go home. the first is unlikely since the government is skint and must be tempting, unless the embedded/entrenched jews in moronistan, aka the corrupt states of A, pony up some serious money to the shills on the hill in which case the shills might find it advantageous to further bankrupt their homeland even further than where it is today! wonder when the standard and poor will downgrade the twats, long over due.

The Rothschild neocolony in Palestine and GCC Wahhabistan finally came out as LGBT partners only to be welcomed by the newest Iranian missile defense pointed at Dubai, quite hilarious geopolitical state of affairs for the global Ziocorporate terrorists.

Gotta hope that China’s and Russia’s recent veto at the useless UNSC against more UN sanctions on Iran will be translated into major sales of weapons and tech transfers towards Tehran.

I hope Iran lets China build a base in Hormuz to protect the oil flow.

Tech transfers are better, at least until China shows a clearer stance re. the global Zioterrorists and their attack dog statelets in the Middle East.

First container train arrived from China to Iran a few months ago and now most trade, weapons and oil is via land. The Americunt arseholes don’t have a fucking clue :)

Iranian oil shipment to Chinese city of Urumqi in Xinjiang, now a major Eurasian transport hub and one of the richest cities in Asia.

Oil to China will be supplied via a pipeline and railroad network already being built to Urumqi. I keep telling you guys, BUY A MAP, Iran is a neighbor of both Russia and China and has land access as the key hub of the new Eurasian multi-modal transport node. Persians and Chinese are very smart people and know what they are doing. https://uploads.disquscdn.com/images/ee0a86e2a105e7eb7eff5db387f6dd3ea55ad333247bb0888b0f186c98ef5ba8.jpg

I think the sea rout would be a faster solution until pipes are ready, isn’t that a mountaineous region?

Western China is quite arid and flat, only when you hit the Pamirs on the Tajik border you get mountains but the Soviets had built a pretty good infrastructure in the Stans, the Tajiks are the closest to Persians and their language is Farsi and same culture. He is a song by the famous Armenian Persian Andy Madadian. The people love Iranians in the region.

Thanks, I didn’t know one of the stans speak Farsi

Yes Tajiks and Azerbaijan were part of Iran. Afghans also speak Dari, which has a few Pashto words, but Iranians can converse with them quite easily. The current head of the Al-Qods force General Ghaani spent several years in Afghanistan as a junior officer along with many others.

Are Tadjiks Suni or Shia?

The vast majority of Tajiks are Sunni, but that makes no difference and there is little Saudi Wahhabi cunts fanned extremism there. The Wahhabi fanned sectarianism is widely shunned in the wider Muslim world. Look at Iran’s close allies like Libya and Algeria that backed it against crazy Saddam. Wahhabism like Zionism is a British imperialist creation to create mayhem in the Arab world. It is basically rejected by all.

I hope they have deployed air defence systems,because they can expect a strike by the US gangsters.

Not to worry, just wait and see the type of weaponry that Iran is strategically deploying. Americunt arseholes have been barking for 42 years now and done fuckall, and not about to commit suicide as Iran is at its strongest now.

I believe the US military is keenly aware of their own weakness and sometimes act as a restraining force on the delusional globalist cunts of the Deep State, Democrats, never-Trump Republicans, and multi-national corporations.

Indian media is reporting Iran has received S-400 or about to. There are several hundred Iranian pilots training in Russia and China.

Russian media has also confirmed it.

Iran is patient and determined in securing its interests and supporting its allies. Shahbaash, derived from Farsi in Urdu-Hindi means well done.

Dead men walking, they just don’t know it yet.

wiping it off the face of the map is like wiping butt with silk..

Within a few years, there will be a thousand Hezbollahs, not only one. The more you fight them, the stronger they grow …

however much the jews in palestine (and elsewhere) duck and dive, they’re doomed and will soon be on the run. when the middle east agree that it’s time to evict the thieving, murdering and generally duplicitous jews from palestine, nothing can save them.

Russia needs to drop FOAB’S in the Homs desert