Few hours before that, Abu Mahdi Al-Muhandis commander of military operations of the Popular Mobilization Units visited the airbase and the nearby city of Akashat and participated in the coordination meetings with government forces already deployed in the area. Considering the recent deployments of additional forces in western Iraq, the operation to lbierate the border city of al-Qaim is expected in the near future.

The Golden Division is expirienced in the urban warfare. So, it will likely participate in the storm of the city.

Then there may be a false flag attack on Americans in Iraq which will be blamed on PMU to give the needed excuse for attacking it. Without PMU, it’ll be a hard task for Iraqi forces.

Clearing Al-Anbar from ISIS and specially securing al-Qa’im is a very dangerous development for the empire, as it cuts the Salafi supply route from Saudi Arabia into Iraq and then Syria, which in addition to Iraqi control over the border crossings into northeastern Syria and Turkey means no more shipments of fresh arms and salafists in Syria. The other supply route from Turkey is closed for some time and if this operation succeeds, they even can’t maintain their PKK proxy in Syria.

Let’s hope and pray that Iraq and Syria and their allies manage to finish this vital task quickly.

You are totally wrong about the supply tu Syria for ISIS. They hardly has any land left, so they only can pass from T2 and by Al Khaim.

Are you that naive or just playing to see people’s reaction? Hardly any land left? You mean every inch of the desert is filled with soldiers?
What do you think the US is doing at al-Tanaf?

PKK Proxy is a proxy made of PKK. I thought that would be clear.

Two other significant strategic assets near al-Qaim that Iraq needs to retake are the Western Pipeline’s T1 pumping station and the Akkas gas field. Akkas is being developed through a multi-billion USD contract by a South Korean company (KOGAS). Iraq still relies heavily on old, oil-fired power plants and needs to develop its gas resources to fuel its cleaner future gas-fired plants. Akkas is a giant-class gas field. There are thought to be many more undiscovered oil and gas fields in the largely unexplored eastern Iraq. 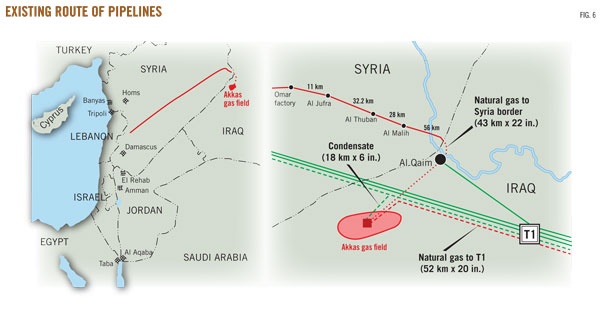