A new military operation to drive out terrorists of the Islamic State group from two districts of the Iraqi western province of Anbar has been started by the Iraqi forces. 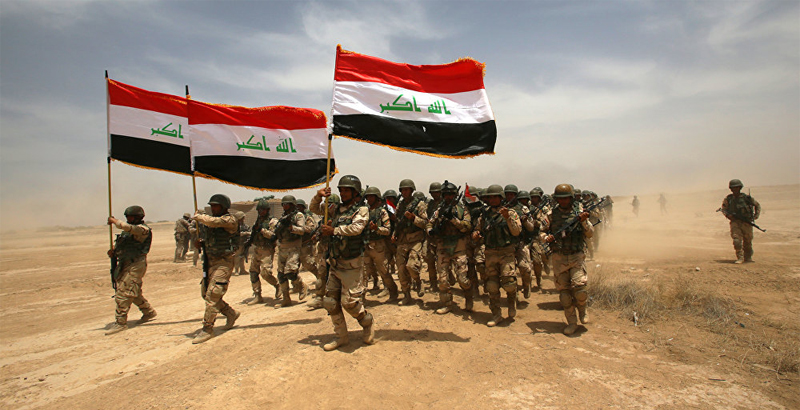 The Iraqi forces, backed up by pro-government tribal fighters, have launched a new operation, aimed on driving out terrorists of the Islamic State (IS) group from two districts of the Iraqi western province of Anbar and establishing full control over the areas, the Iraqi Alsumaria satellite TV network reported, citing commander of the 7th Division, Major General Numan Abd al-Zawbaei, said on Tuesday.

According to the Major General, the main goal of the operation in al-Madham and Khabrat Umm al-Waz districts, located to the southwest of Anah town near the Euphrates River, is elimination the last pockets of IS terrorists. Al-Zawbaei also added that an explosive-laden car and a rocket launcher with 12 projectiles had been destroyed by Iraqi troops and their allies so far.

Meanwhile, a mass grave with bodies of dozens of people, killed by IS terrorists, was found by the Iraqi Federal Police in the al-Zahra mosque, located in the western part of Mosul city. According to a representative of the Nineveh Provincial Police, Captain Yunis Dhanon, the grave “contained corpses of 24 civilians, mostly women,” who were executed by the IS. He also added that the killed civilians’ bodies had signs of torture and decomposition and had no identity cards that would allow to identify the victims. Reportedly, they were sent to the al-Badil Medical center, located in southern Mosul.

At the same time, on Tuesday, the Iraqi Observatory for Human Rights (IOHR) reported, citing unnamed local sources from Mosul’s Old City, that IS terrorists massacred over 100 people in the western part of the city last Friday. According to a statement of the IOHR, members of 22 families from the area of al-Mekkawi were killed by IS terrorists, as 22 young men from those families attempted to leave the district with the help of a Syrian smuggler. Reportedly, two months ago, the smuggler and the young men made a deal, but their plan was disrupted, as the Iraqi security forces launched an operation in order to liberate the region. After IS terrorists found out about the scheme, the young men, their families and the smuggler’s family were executed. According to the IOHR statement, terrorists carried out the executions in public baths in Mekkawi, leaving there 106 corpses. About 14 hours later, civilian-owned vehicles arrived and took the bodies away for burial.

In addition, also on Tuesday, the Iraqi Joint Operations Command (JOC) issued a statement, according to which a number of IS commanders were killed in airstrikes, carried out by the country’s air force on their position in al-Tanak neighborhood, located in western Mosul. According to the statement, a commander, who was responsible for Arab suicide-bombers and child recruitment, was among those killed. However, his name was not specified.

In addition, on Tuesday, the UN announced that since the beginning of the operation to liberate Mosul, some 392,000 people have left their homes in order to escape the armed hostilities. Reportedly, 94,500 of them had returned since then. Meanwhile, according to the International Organization for Migration (IOM), 302,400 people have been displaced during the Mosul operation. The report comes as the UN is expanding its camps around Mosul in order to accommodate more refugees.

It is important that Iraq holds onto the Iraqi-Syrian border, as ISIS and other militants can pass the border and commit crimes in Syria, and run into Iraq, or vice versa.

the border cannot be secured because its just a big desert. After Mosul, Iraq could start advancing along the Euphrates until it reaches Deir Ezzor and help Syria to break the siege. The main problem is that the Sunni population probably will not support them.

Nobody in Iraq and Syria likes ISIS anymore.

I believe there’s only one decent road left that crosses the western desert and it’s probably been ruined with bombs to force ISIS to take long meandering detours around the destroyed sections. Intelligence reports have been saying for months that ISIS has been withdrawing units from all over and sending them south of Deir Azzor to Mayadin, which is their new capital. That’s a good place for them since that stretch of the river is bordered with desolate deserts with few roads passing thru them. They’ll be stuck when the SAA, SDF and Iraqis start moving in along the river from both directions.