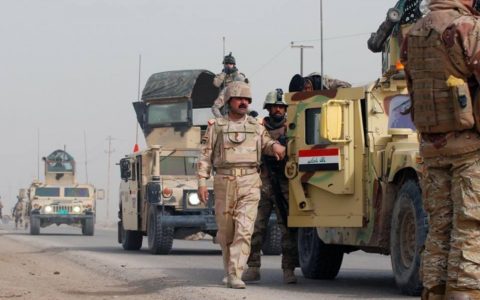 Iraqi security forces (ISF) have carrued out a “wide-scale” operation against ISIS cells at the Syrian-Iraqi border, mostly in the area of al-Qaim, local sources and media outlests say.

According to reports, since April 2, ISF has conducted a series of raids in the desert area near al-Qaim, destroyed a tunnel in the desert near the town of Hit and cracked down on ISIS cells in the areas of al-Therthar and al-Bou Theyab near Ramadi.

Up to 70 ISIS members were neutralized in the aforementioned operations and sporadic clashes erupting between ISF and ISIS.

On April 3, reports appeared that about 400 ISIS members had entered Iraq from Syria.

Over the past week, reprots repeatedly appeared that ISF may soon launch a coordinated anti-ISIS effort with the Syrian government or with the US-backed Syrian Democratic Forces in order to wipe out ISIS terrorists of the Syrian-Iraqi border. However, no such operation has been launched yet, according to the Iraqi military.

In any case, the ongoing security operation against ISIS in al-Qaim and other Iraqi desert areas is an important part of the wider effort to improve the secuirty situation across Iraq.

“Peshmerga done all the work” yes, hard work working with USA and Turkey to allow ISIS to attack Iraq and smuggle oil.

Peshmerga left, 1-2 hours later ISIS popped up again like they never left (which they didn’t).

You can call me Al
Reply to  Iona four

kudos to the iraqi security forces

I told you that the SDF would not be involved.

Again “neutralized” not killed and blown up into shreds.

Anyway, good job Iraq. Now let the PMU inside Syria and wipe out the rest with the help of Hezbollah and the SAA.

Hope they don’t get accidentally bombed by the USAF again

The Iraqis under the current Administration is doing a lot better than previous Administrations. Iraqis are basically exhausted and they NOW think they want a safe and secure country.