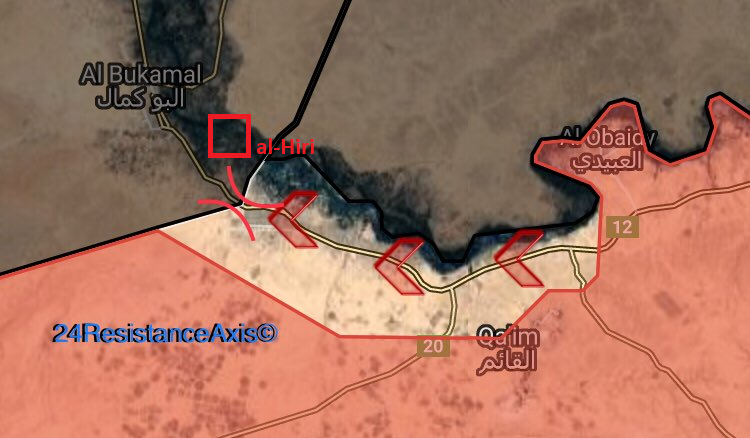 However, Ahmad al-Assadi spokesperson for the PMU denied that the PMU is fighting in al-Bukamal city inside Syria now according to the PMU media wing.

“The PMU is an Iraqi armed forces that don’t fight in any position out of the Iraqi border … The PMU has no fighters in Syria, nor in al-Bukamal or anywhere else” Al-Assadi told the PMU media wing.

Syrian local sources also denied that the PMU entered al-Hiri village. However, the sources said that al-Hiri village was shelled with mortars by the PMU several times in the last few days. The sources added that Iraqi attack helicopters destroyed several 23mm guns of ISIS in Suwayyah village west of al-Hiri village on November 4.

The Iraqi Army and the PMU are likely planning to open a corridor for the Syrian Arab Army (SAA) and Hezbollah through the Iraqi territory to attack ISIS last stronghold in Syria, al-Bukamal city. It’s already confirmed that the SAA deployed some of its units with the PMU in al-Qa’im city inside the Iraqi territory.

Yes, roads are easy and fast to build.

Google is paying 97$ per hour,with weekly payouts.You can also avail this. On tuesday I got a brand new Land Rover Range Rover from having earned $11752 this last four weeks..with-out any doubt it’s the most-comfortable job I have ever done .. It Sounds unbelievable but you wont forgive yourself if you don’t check it !dz110d: ➽➽ ➽➽;➽➽ http://GoogleLegitimateStyleJobsFromHomeJobs/get/hourly… ★✫★★✫★✫★★✫★✫★★✫★✫★★✫★✫★★✫★✫★★✫★✫★★✫★✫★★✫★✫★★✫★✫★★✫★✫:::::!dz110lhhhh

I would think an excuse would be found to kick Turkey out of NATO before the Zionists can use Israel 2.0 (K*rdistan) to partition Turkey and Iran.

You can call me Al
Reply to  Axis of Resistance

The maps are what the NWO want now – it isn’t going to happen.

Do you understand the different factions of the Kurds ?… to be honest I don’t. But from what I can understand, these Kurds are bad Kurds, linked somehow to the likes of the PKK – but yet again the Yanks have sold their soul and continue funding them. They all need eliminating.

As for small city – you miss the point, honestly you do ….this is the last major border crossing open to them, nothing to do with the size of the town / city.

Ok then, thanks for the info.

Blucross
Reply to  You can call me Al

I do not understand the differences either, BUT, I do know Americans, even the dull ones , like the Kurds and want them to have their own homeland.

You can call me Al
Reply to  Blucross

So if I said that over 50% of the Kurds did not want a “Kurdistan” – what would you say. Because that is the truth I mentioned.

I am a Christian, but I am a Protestant …. now take me back 300 years or so and I would be fighting the Catholics …… similar sort of thing.

Another example – Muslims – we all know the Shi’ite and Sunni, but both of these groups are divided in themselves.

Same thing with the Kurds. FACT.

PS The Yanks have an allegiance with a certain part only.

Dont forget that US has been pushing for the creation of Kurdistan with an access to the sea. In order to do that, the US is doing everthing to unite the kurds with the Sunni Syrians in Idlib province. Unfortunately, a new big war will start after the compleat defeat of ISIS because the “balkanization” of ME is the main objective of US/Israel and, as long as the people of Middle East dont stop hating each other, they will be used as pawns for their own self-destruction.

SAA and PMU should advance on both sides of the river, if advancing from IRAQ

Fire the script write and hire a new one.

i can see the demand for sdf uniforms to reach the sky in the following days….the good thing about that is that there is now tolerance between arabs (isis) and kurds…..they may be thankful to US for helping them escape death but joining the Kurds….thats a lot to ask….it wont be long …we will see major clashes between ‘sdf fighters’

I hope so, and good cooperation between Syria-Iraq (PMU) is expected.