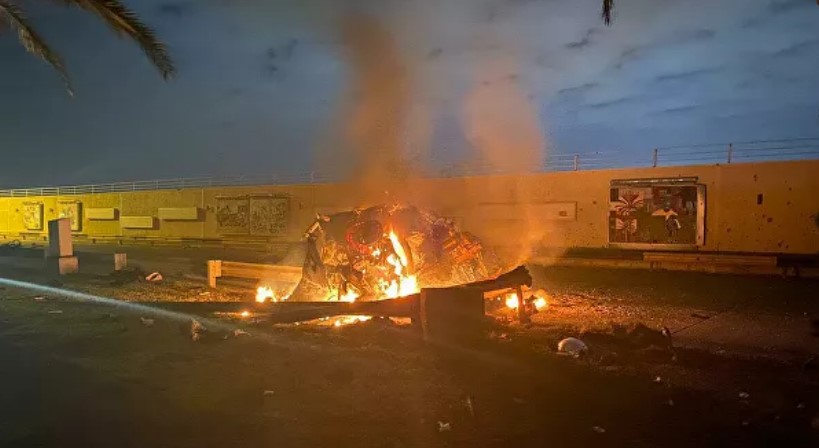 According to the spokesman, Abdul Karim Khalaf, Iraqi authorities are now questioning the crew of the civilian plane which carried Soleimani on his last voyage from the Syrian capital, Damascus, to Baghdad.

“The investigative committees have started work, and we will investigate all those we believe were aware of some facts and information inside the airport,” Sputnik quoted the spokesman as saying.

Soleimani along with other Iranian and Iraqi commanders were killed on January 3. Several U.S. airstrikes destroyed two vehicles, which were carrying the commanders, near the Baghdad international airport.

The Iranian commander arrived in the Iraqi capital aboard a commercial flight of the Sham Wings, a Syrian private carrier, according to several sources.

As for now, it remains unclear how the U.S. was able to track Soleimani. The Iraqi investigation could uncover many details on Washington’s plan to assassinate the Iranian commander.

I would be investigating who in the Iraqi government knew that the General was also to attend the funerals of his loyal soldiers and their families.

In all fairness, Solemaini was totally reckless on how he moved around in the middle east, and in particular in this case, flying either private or military jet to Baghdad airport when you know full well that there is huge premium that Mossad and CIA has placed on your head.

There are many other covert ways to move around safely, rather than flying to international airport where Iraq has only de jure jurisdiction over, with the de facto jurisdiction being in Jerusalem and Washington ( as who flies in and out of Baghdad airport). As seasoned operative he should have known way better.

He was well aware of the risks, but chose to act and move openly and not in hiding.

He had balls. But now they can’t find them.

He still has more balls than Trump, or any American president ever had.

You can include that chickenshit Nutsack as well.

He might had had ball, but certainly not enough brain to judge the tactical movement filed for high profile target like him. What good are all you operative skills if you can not survive long enough to implement them?

I remember to outstanding soldiers in WW2 that were special forces operatives who both inflicted heavy losses on the enemies ( of any kind) and managed to survive the war and lived for another 30 years or so after the war in freedom (for the most part); one was Joachim Piper ( Berliner) and the second was Otto Skorzeny( Wien). That is for me the definition and reference point for outstanding , and highly efficient operative.

Soleimani felt too comfortable and confident.

Nah he just dont believe US had crazy brain to be able to target him as Iran one most highest official military general, thats why he dont care much until us kill him, this just really act war in many country that you cant just go away by killing one most higher military rank in other country without consenquences

Well, the US just did that and there likely will be little consequence unless the Islamist Iranians want to lose way more of their leaders and maybe their whole damn country.

Please ! Just send in 19 Islamist with box cutters. Yes! “that plan” defeated trillions in security measures and killed thousands in the US. Right ?

The Americans wanted to punish Iran for the embassy attack and Soleimani’s head was handed to the Americans.

You mean they created a reason to get him to a place where they could kill him with impunity . Do you know anything about the steps Germany went to to create the reason to invade Poland. How they spent months selecting and training Polish speaking Germans to speak only in Polish at all times. Anyone that didn’t was taken away and shot. How they were secreted across the border into Poland and they came back and attacked a German radio station speaking in Polish. When they arrived back at their secret base they were taken out and shot as dead men tell no tales. What did America do to start a war with Spain and steal all their colonies .Remember the Maine. What did America do in the Bay of Tonkin to kick start the Viet Nam war. How many airport and railway terminals did America blow up in Europe killing civilians to stop the Communists from getting elected after the 2nd WW. .

I think the truth is simpler. Soleimani fell into an American trap with the help of the Iraqis.

The Iraqis government and the military are traitors,as an observer let’s be honest.this wouwo have been the moment i request and gave them 48 hours to removes they troops out of my lands and un the mean time my troops would surrounded they base and they will be a no fly over my lands but cargos plane to remove they troops and equipment. No leaders of they people would let the USA military in they lands to create chaos and anarchy.

A few months back I read a report that said that America wanted to replace the Iraqi PM and replace him with someone more compliant as the PM was too close to and supportive of Iran. Soon after there were protests starting in Baghdad which end of Nov/Dec the PM steps down and is replaced . The more tine goes on the more contrived this is all looking and all events planned . I don’t think the Iraqi government will do anything except say nasty words about America and they better not do it again or they might get upset. How many people in America standing up and asking questions . How many around the world. Sweet FA as very very few care or have a clue what is going on. All they are worried about is what lipstick is a Kardashian selling today or what handbag matches my new shoes and dress. Walking around with their eyes glued to a little screen telling them they are the greatest for believing the bullshit placed in front of them. Either that or gung ho for a war because all those Hollywood movies show what a great time one has in a war.. or listening to Greta Thunderburg saying they should all swim or walk for their next international trip as that will save the planet. Most people are still on holiday and will need to get over the jet lag before looking at what happened in town while they were away let alone look at what is happening in the ME as that doesn’t affect us … Yet ..

Yes, most people in the US are asking questions…like…why didn’t we do this sooner and when will be do more? And yes, the Iraqi government will do nothing, the US will increase its presence there, more Islamist Iranian murderers will be eliminated. And if the Iranian supporting Shi’a get too frisky, note that a very large proportion of the population don’t like them and will in effect support the US. That would include the Sunni, Kurds and Iraqi Shi’a who are sick and tired of their old enemy, Iran, trying to control Iraq.

Of course Jake , I believe everything you say as you have proven YOUR credibility many times. I think another aptly chosen name , Jake the Peg. Now that is a story you can relate too … have a nice day ..

Just saw a tweet stating Iraqi police forces were engaging PMF. Just a clusterfuck all around over there.

Easy to track him. Just ask the Israelis where he is. They know where most all these top Islamist Iranian murderers are, in and out of Iran.

With that kind of logic, it should be cake on a plate to trace back all of their sources of intel….. idiot.

The Iraqis apparently handed Soleimani’s head to the Americans after the fiasco at the embassy.

FFS, CENTCOM probably could have just phoned Tehran and asked Soleimani, himself, before he left. It was a commercial flight. He didn’t give a damn. Unlike cowardly US and Israeli military commanders, Soleimani traveled around publicly – in the open – pretty freely. No sneaking around like a f’king rat. No particular secrecy. No elaborate security or deceptions necessary. Persian pride? Who knows. At least his country didn’t stoop to spineless, illegitimate assassinations of foreign leaders. Unlike some countries (Yeah, that would be YOU, Israeli, Saudi and US pricks).

This is just the Iraqi government doing the Americans bidding, ala, US style. The zioamericans always do endless investigations to distract the public from their crimes and to pin the blame on patsies. I predict the slave Iraqi parliament will not vote to kick the ZioAmericans . I hope I very wrong though.

I wouldn’t want to be any of the innocent people they investigate, I can imagine quite a few innocent people that aren’t involved in the assassination plot but were associated with the Generals travel agenda, will be getting very anxious right about now.

The investigation might start at the beginning of this affair, the “unknown US contractor” who was probably re-routing Iraqi oil to the Kurdish pipeline to Turkey. This whole affair is an attempt to hide that corruption.