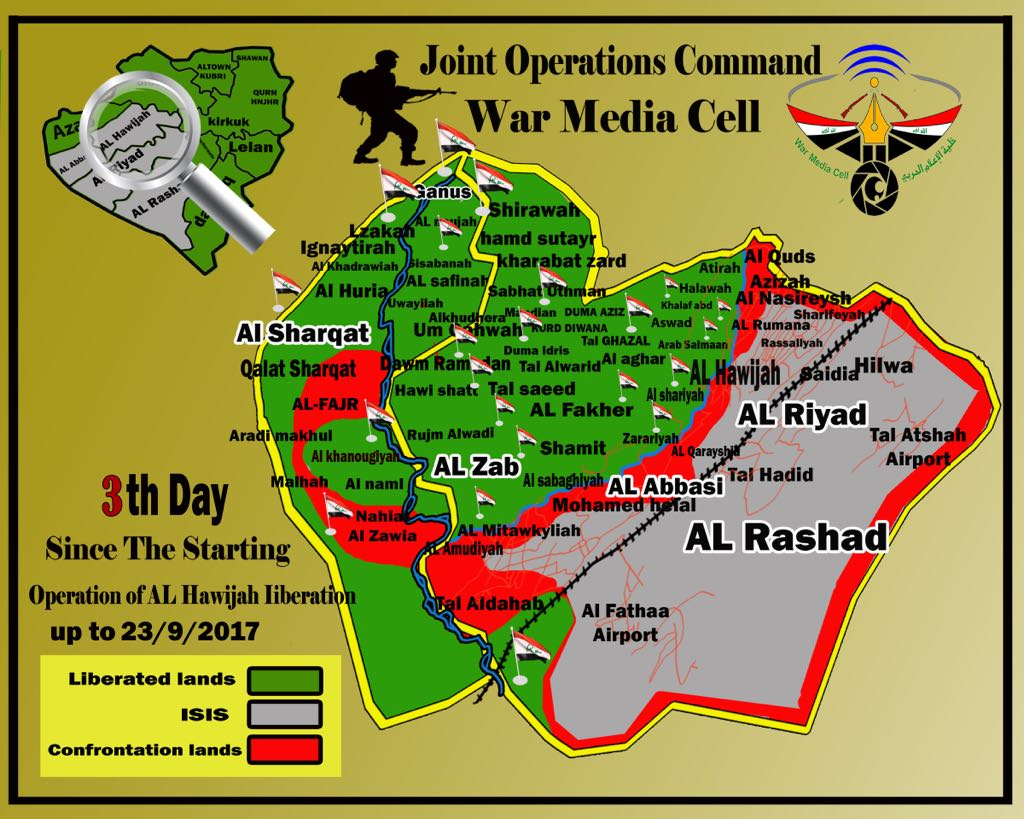 On Sunday, the Iraqi Army and the Popular Mobilization Units (PMU) completed the first phase of the ongoing military operation against ISIS in Hawija area south of Kirkuk city according to the PMU media wing.

The PMU media wing announced that the Iraqi government forces captured 120 villages and 1251 square kilometers during the first phase.

The most notable achievements of the government forces during the first phase were the capture of the following areas:

126 ISIS fighters were killed, and 10 VBIEDs were destroyed by government forces during the first phase of their advance, according to the PMU media wing. 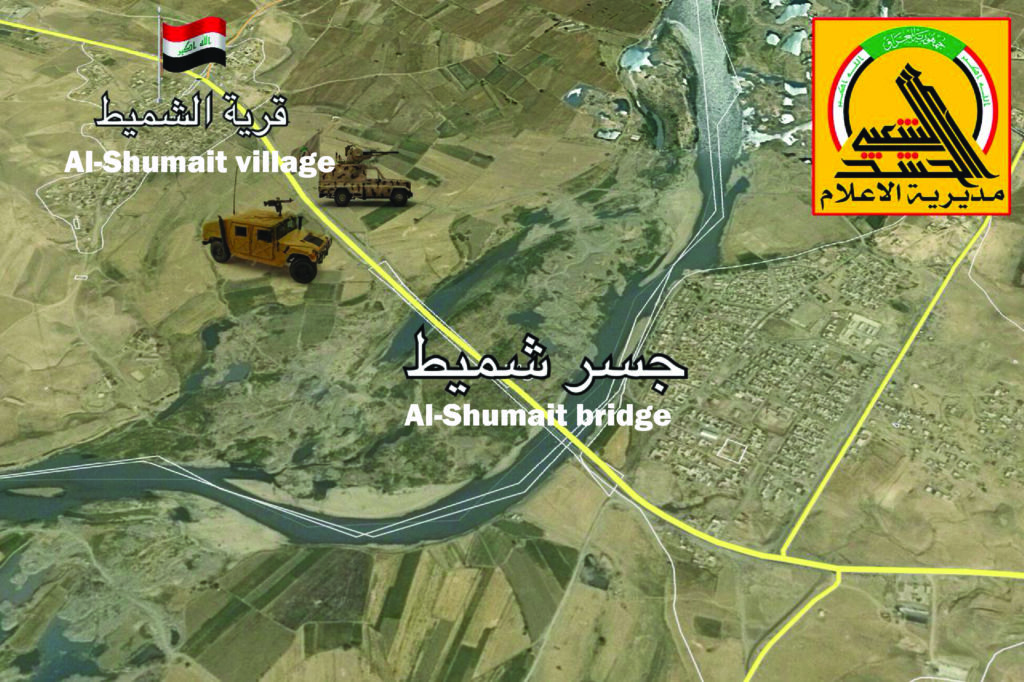 As the government forces attack is getting faster and faster, ISIS fighters who are besieged inside Hawija area are expected to surrender or fully collapse within a week.

While the Iraqi Army and PMU are fighting ISIS, Iraq’s government asked KRG to send it’s troops too but they didn’t answer. Instead KRG forces deployed to Kirkuk to force it’s people to hold Kurdidh flag and suppress any opposition. Pathetic. Iraq will free itself of the terror and will deal with any further threats.

PS. Iran closed it’s airspace to flights from and into KRG, by the request of Iraq’s government. http://www.presstv.com/Detail/2017/09/24/536303/Iran-Iraq-Kurdistan-airspace-SNSC-airspace

They need to be sent back into the mountains, no more presence in any major Iraqi cities, perhaps they can have one or two smaller cities to live in but they need to pushed back into a thin strip of land never be allowed back inland.

Their leaders have no shame. A reporter asked Barzani about what they’ll do if all the surrounding countries close their borders to KRG after independence, he answered: Then we’ll have no choice other than fight our way until we reach the Mediterranean. :-O They want to follow every step the Occupying Regime took. Aren’t they sweet?

Mossad Barzani clearly doesn’t care about Kurds or their well being, he’s an agent following orders for his own personal gain.

Thats typical anemy talk. You might have a mirror and also listen to Your own naive attitudes about it.

No more orgastic then other declarations around them. You might study what happend last time and why Old Barzani is still there.

Could be like the last uprise even I dont think they should declare more then an improved autonome.

Well, the reason Kirkuk is contested is because someone has killed all its inhabitants not so many years ago.

How many dead ones this time and whois next. Like You say Saddam didnt do a good job. Well he tried hard and mainly killed kurds there. He was nicer to most turkmens and deported them to south of bagdad, but wasnt it a 95% assyrian town.

And those, which now are under fire at hawja. What are they. Well, want they Saddams.

So who is the right people to live in Kirkuk – The Oilgrabber thiefs for Bagdad. Do kurds have to wear turbans with oranges in to support that. Of course not.

THEY MAKE THEIR INDEPENDENSY BECAUSE YOU ARE LIKE THAT.

Yes, we know who aided and abetted the genocide in Kirkuk but those people want their homes back, but the Kurdish Governor said too bad snooze you lose so that is land theft right there. The only Kurds there came in 1990’s as they were land grabbing back then. Those Peshmerga Kurds were pushed out by the Iraqis all made up of Sunni, Shia , Feyli Kurds, Assyrians etc. they left then and returned to the mountains.

The Iraqi Army and PMU are the only ones fighting there as the Peshmerga went to Kirkuk to murder and threaten all opposed to the referendum. They have refused to fight ISIS as they would lose too many fighters to Iraqi forces and withdrew many of their fighters embedded with ISIS.

Peshmergas there are not sheep but defined as a selfdedence force according to Iraqi Kurdistan of 2004. They therefore defend Kirkuk, which they assume is their being under attack of ISIS many, many times and contested by Iraq/Iran fanatics incl. robbingm rapind, hostage and killings.

When Peshmargas tryed to help more taking Mosul faster, they were denied that.

So troops to the fightings today are only meant as they are spendable sheep. Some should remeber Bagdad has threatned those mainly kurds by hard attacks if they held those elections.

So why be killed by ISIS, when there might be more important fightings against Turkey, Badad and even Iran.

Nice people those Bagdads even Bazinis are not nice as well.

How many boats are there? Or Ore Or. Somethings there really shouldn’t be an option, stop or. It’s just S T O P. ISIS/ISIS Sympathizer’s order terror attacks, they consider themselves “freedom fighters” when in essence ISIS/ISIS Sympathizer’s are freedom takers. Just as recent as last Friday in the London train station there was a stampede due to fear. The fear is intimidation, it’s called terrorizing. The terror group needs to face their executions.

The strange case of the evaporating ISIS.

Fight for your country brave heroes and warriors and sons and daughters of Iraq against all those who would try to destroy it. The Peshmerga have always refused to fight their brothers in ISIS and loathe that they had to do it when forced by the US to fight them. Many were in league with them from the beginning as they were asked by some Kurdish Mullahs of Salafists to join the Khalifa call and Martyrdom.

Vertical lies. Peshmerga has removed ISIS from the part, they have now even closer to around Mosul. https://uploads.disquscdn.com/images/575d2195b455a2ed927a1bb7eb8e2c878ce4e70e7412416c35b1cce4974f2f6d.jpg Its 1856 Ottoman. Where is Iraq and where are the real problems. Well, most of them are not kurdish but old hate between Shias and sunniarabs grabbing each other in stead of helping each other.

Thats no country and besides that made for Franch and Brittish oil transportation from Kirkuk and there.

It make some kind of sense looking at those old maps. Syria is same thing.

You cant live in that big countries running them with fear and greedy corruption as Emirates. You either divede them to better smaller units or be democrasies. None tells be You have any idea about demicrasy and are not able to.

You see exact the same for Syria.

So the solution for kind of peace are Emirs in the barzani style ad well as mesopotaimia, Mosul, Diabykir, Aleppo(Haleb) a.s.o.

Why do you lie about their participation and everything you say is trying to deflect from Kurdish History. There are even Kurds in Turkey are trying to reconcile with their past while others refuse and join terrorist organizations.