The Public Prosecution in the German city of Dresden announced that the Iraqi authorities arrested several German girls in Mosul city after its liberation, including a underage girl.

According to the available information, the minor girl is Linda Wenzel, 16-years-old. According to Iraqi sources, Wenzel is an ISIS member and is married to a Chechen ISIS fighter and she has admitted to killing Iraqi soldiers. 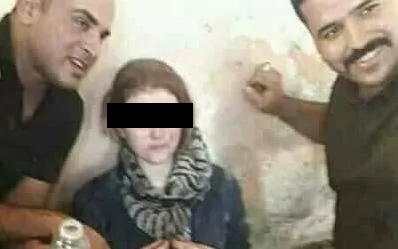 Linda was arrested inside a tunnel in Mosul City after its liberation, one of the Iraqi soldiers who arrested her said:

“We found her with a gun in her hand next to her Chechen husband, who was then killed by Iraqi forces in a firefight. She said she had killed a number of our men in the battle”. According to the soldier “she was a Daesh sniper, but maybe her husband pressured her into it. She looked scared.”

The official statement of the prosecutor’s office in Dresden confirmed that the girl was actually Linda Wenzel.

“Linda, -16 years-old was identified in Iraq,” the statement reads adding that Linda is currently receiving help from the German Embassy in Iraq.

According to the German Newspaper Der Spiegel, the Iraqi authorities have handed over to the German government a list of the names of at least four German girls arrested in Mosul, including a girl of Chechen origin and a girl of Moroccan origin. It’s stil unknown if the girls face prosecution in Iraq.

German have displayed- as a nation- a proven historical propensity towards embracing a fairy-tale life and fairy tale solution to societal problems. This approach has got them frequently into trouble in the past and it is doing so in the present. It amazes me how easy this ethnic group falls for all kind of phantasmagorical solutions; it seems like someone else needs to think ( at least at political level) for them, as they -as nation- are incapable of reaching sound conclusions of what is feasible and good for them. Collectively they appear to be living in lala land which much of the Nordic nations displaying the same self destructive syndrome.

Hitler actually mentioned in Mein Kampf how naive and stupid the Germans were, continually being fooled by the conniving British et al,. something to do with high trust societies and an adapted evolutionary survival mechanism from the Ice Age. This high trust enables high civilization and achievment however such societies are very easily subverted and destroyed by less high fuctioning or greedy jealose type cultures “we all know who”

Americans are exactly the same.

The largest ethnic population of America is still ethnic-Germanic.

Please keep them in Iraq and they should face prosecution like any other ISIS member.

It is 10 PM. Do you know where your children are?

One moment she is off to the local 7-11, to pickup a Slurpie. The next moment she is in some tunnel in Mosul strapped to a dead Chechen dude fending off the Iraqi army.

It will be a harsh treatment for them. Those iraqi troops are very angry to daesh.

Kill them and do not bring them back to Europe. If they come back they will just kill more civilians in terrorattacks.

hang the little bitch, in a few month send what is left to back to Germany.

Prosecute, convict, hang them. It’s cruel, but we have to be cruel in order to be kind in the long term and show future wannabes that only death and failure will await them. None of that touchy feely softy Western crap.

How brave you are!

Reality is what needs to be done is very simple , they should be treated as a murderer none them are legal combatants and therefore murderers and punishment for killing another is based on that countries penalties and laws for it. The old saying is “Don’t do the crime if your not willing to do the time”.

In Mali , an African country the Wahhabi jihadists capture 10 and 12 year old boys , conscript them , feed them real food , and their jihadist ideology . They send them in massive waves against regular army . Not that these German girls were necessarily forced into their situation , but it is much easier to indoctrinate children . We all get mentally attached to false beliefs about ourselves , growing up is learning to become aware of them , and then growing into better people . Show some understanding , they need de- programing not death .

In terms of ISIS repatriation, there are probably some ISIS fighters who were conscripted against their will. Therefore, my theory is that every person who fights for ISIS gets executed in a horrible way, after a short trial, with leniency only for those who bring their immediate commanders head, and a defense to those who kill many ISIS fighters, and scalp them, American Indian style.

Equal rights means equal fights. They should have shot her in battle rather then her return to simply blow herself up 7 years from now and kill a bunch more people while working for Mi6.

As a real Muslim, you are not allowed to kill or torture people once you have captured them. This is the real Islam and not what you hear, read ,see from the zionists devils murdoch’s, cnn, bbc, fox, zionist wahabis media etc perspective. They are the enemies of the Islam and will never ever tell the true story of Islam.

They shouldn’t get help from their embassies , there should be one law for all ISIS prisoners wet her male or female, whether they came from Somalia or germany. I already see sympathy for this evil girl ‘may be her husband forced her to do it ‘

Wow big tough Iraqi men capture and humiliate all the so called ISIS women, but no males? Looks like the ISIS males get off easy, while the women suffer as usual. Iraqi men treat women no better than ISIS do. They’re all the same.