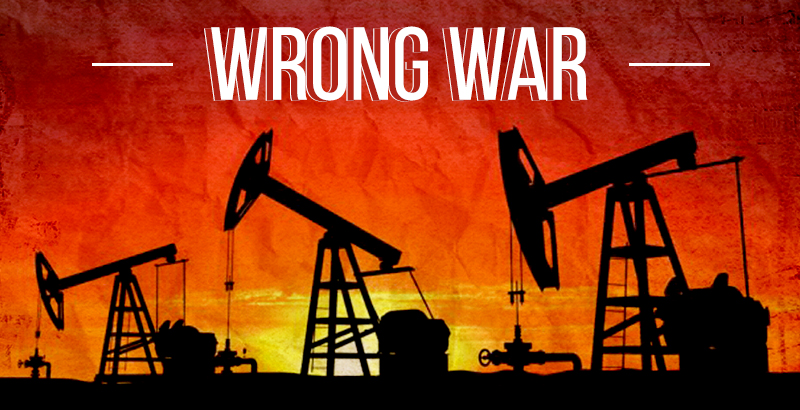 Aftermath of 9/11 and the events that followed had been a game changer to many middle eastern societies. The pretext for waging war against terror and all those who help terrorist was undisputed. United States began their crusade against Taliban in order to fight Al Qaeda, but somehow they ended up bombing Iraq in 2003. The thought that an authoritarian regime could have weapons of mass destruction was more than enough to start the war against Iraq, despite having little evidence to sustain those claims. In spite of having complicated relations with the Iraq in the nineties, US war against Sadams regime came a decade later. Ruination of Iraq isn’t conceived solely by the act of bombing, it is much more a product of post war activities (or no activities) in order to make a stable and functioning society.

Deterioration of Iraq started as a war against Iran in the eighties, long history of border disputes finally culminated with this conflict, though it lasted for eight years and resulted in mass casualties (military and civilian) there wasn’t any effort from the global community in order to stop it. On the contrary the US supported Sadam in his territorial claims. Since the Iranian revolution toppled the Shah and implemented anti-west policies, the Iraqi aggression was welcomed by the US. After the war Iraq economy was devastated and the government was in debt (14 billion dollars) to Kuwait. Mistakenly taken US attitude towards Iraq war with Iran, Sadam Hussein invaded Kuwait. Small and rich country ready to be plundered. After this event Iraq was sentenced to another war (Gulf war) and the sanctions from the West which were very harsh on the people of Iraq (half a million children died due to insufficient medical supplies). State secretary at the time Madeleine Albright approved these sanctions stating “I think this is a hard choice, but the price we-think the price is worth it.”

Declaring “War on Terror” any country suspicious enough could be a target of the American crusade. Iraq was no exception. After the invasion in 2003. the sovereignty of Iraq was in the hands of so called “Coalition of the Willing”. Primary goals of this military intervention were to destroy weapons of mass destruction, remove Sadam Hussein from power and bring democracy and prosperity to Iraqi people. It’s not enough to say that something went wrong. The country engulfed by war, poverty and sanctions was subjected to capitalism and free market. Most state jobs were canceled, the military of almost half a million dissolved (which was the sole national non-sectarian institution), and the country was put under occupation since there was no elected government. Anyone can see that these steps are pushing the country to the edge of collapse. So one must ask himself what were the true goals of this war? One option which was bluntly stated by former  Federal Reserve chair Alan Greenspan “everyone knows the Iraq war is largely about oil”, is reasonable since the United States can secure this way their oil assets in Saudi Arabia by destroying any competition which is not under control. The other option is much more sinister. Creating a ruined country with deep sectarian gaps which is in constant turmoil can produce a variety of extremists, terrorists, radicals and other paramilitary organizations that can be later exported to other regions if need be. This “controlled chaos”, relatively unstable, can serve its purpose if there is enough money to sustain it. And thus we come to the occurrence of Islamic State.

With the American occupation of Iraq, sectarian divides were getting more intense. Destruction of Iraqi military many officers and soldiers saw their new role in various paramilitary organizations, some of them Sunni and others Shia orientated. Amid chaos Al-Qaeda sprung into existence in 2004. after the fall of Sadams regime. Ten years later Islamic State is reaping what US intervention sow, long occupation and degradation of Iraq was a fertile place for training and arming new generation of jihadists. Spreading like a forest fire Islamic State managed to conquer west parts of Iraq and large parts of Syria, which is already facing a difficult situation battling other groups of extremists. Such event is unprecedented in modern history, yet no regional power like Turkey or Saudi Arabia haven’t made any efforts or show any concerns towards this problem. The policy was still set in stone, president Assad is the only true threat.

The Heartland theory (Sir Halford Mackinder) could shed some light on the current situation in the Middle East. Although it dates to 1904 this theory shows how countries like Iraq, Syria and Iran are important in a geostrategic way. Destabilizing these states creates a clear path to central Asia and countries like Kazakhstan, Turkmenistan, Uzbekistan etc. Not only this region provides vast amounts of resources but it also makes a good position for potential military bases towards China and southern Russia. From this standpoint it is clearer who profits by sustaining this “controlled chaos” in Iraq and Syria.

For the last twenty five years there was no suitable solution for Iraq. US interventions, sanctions and finally occupation of Iraq led this country to present situation. Ruined Iraqi society cannot hope for foreign aid, especially of western countries, since that opposes their interests in the region. Though retribution in form of migrants, refugees, mercenaries, former radicals and extremists threatens to pull Europe apart. Such is the price of alliance with Pax Americana.