FILE – In this Aug. 20, 2017 file photo, U.S. Army soldiers stands next to a guided-missile launcher, a few miles from the frontline, in the village of Abu Ghaddur, east of Tal Afar, Iraq.

On August 11, Iraq’s Joint Operations Command rejected the Pentagon’s recent report claiming that there are approximately 14,000 to 18,000 ISIS members still in Iraq and Syria. The Iraqi military said that the Pentagon-provided figure was “greatly exaggerated.”

“The Pentagon’s report on the presence of more than 14,000 Da’esh [ISIS] militants in the desert bordering areas of Iraq and Syria is greatly exaggerated,” a spokesperson for the JOC, Brigadier-General Yahya Rasool, told Iraqi news agency Malouma.

“We disagree with a lot of things mentioned in the Pentagon report,” he said. “ISIS elements present in those areas do not exceed dozens [of members] and are deployed in the form of small groups of three to five militants.“

The Iraqi military official emphasized that actions of ISIS remnants in the desert bordering areas are defensive, and not actual offensives yet.

“The military campaign ‘Will of Victory’ in the first, second and third stages destroyed many of their hosts and hideouts, and killed dozens of the militants,” Brigadier-General Rasool said adding that security operations will continue.

On August 6, the Pentagon Inspector General presented a report to the Congress saying that ISIS was “growing again in power” in Syria and Iraq, with around 14,000 to 18,000 available fighters.

The report claims that “ISIS continued its transition from a territory-holding force to an insurgency in Syria, and it intensified its insurgency in Iraq.”

“ISIS is able to operate as an insurgency in Iraq and Syria, in part because the Iraqi Security Forces (ISF) and U.S.-backed Syrian Democratic Forces (SDF) remain unable to sustain long-term operations against ISIS militants,” the document argues.

At the same time, the report ignores that ISIS insurgents remaining in Syria use the US-occupied zone of al-Tanf as a safe haven to hide from Syrian Arab Army attacks and that the SDF-held area in northwestern Syria is full of ISIS members thanks to multiple ‘deals’ made by the US-led coalition with the terrorist group over the past years.

As to the Iraqi stance on the report, Baghdad apparently understands that the Washington establishment uses the ISIS threat in Iraq as a pretext to keep the military presence projecting own influence in the country. US and Co mafia are right becauase all US and Co forces are ISIS. They speak English not Arabic language.

“…On August 11, Iraq’s Joint Operations Command rejected the Pentagon’s recent report claiming that there are approximately 14,000 to 18,000 ISIS members still in Iraq and Syria…”

Well, this is one occasion where CNN actually provides (unwittingly) useful information. From April 17th, 2019:

“…The foreigners are among the more than 9,000 ISIS fighters being held by the US-backed Syrian Democratic Forces, with the majority of those being Syrian and Iraqi nationals.

An additional 60,000 of what the US government refers to as ISIS “affiliates” are staying in make-shift camps where the SDF has a security presence.”

That would leave 5,000 – 9,000 ISIS members left in Syrian and Iraq who are not in SDF concentration camps. Considering the camps’ ISIS recruitment and other affiliates inside the camps, that only leaves a few thousand running around loose in Syria and iraq. Even the Iraqi Joint Operations Command would have to agree that ‘a few thousand’ is a reasonable number if you consider 10 – 15,000 are in the camps. Problem is that the US and SDF have every intention of arming and releasing all of them if they agree to fight against Assad or kill Shia in Iraq.

CENTCOM Commander McKenzie [to ISIS boarding busses in SDF camps]: “Yes… that’s it. You’re off to all corners of Syria and Iraq. Exterminate all Syrians and Iraqis for your Wahhabi and Israeli masters, gentlemen. As a parting gift, we’ve hidden a few weeks worth of Captagon and 100 rounds of clean ammo under each of your bus seats. Don’t steal! Only one package per head-chopper, and I damn well mean it, by snackbar! Now go forth and slaughter for my neocon masters, and… Godspeed!“ 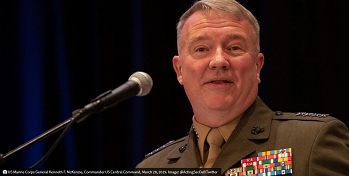 They don’t exaggerate becaiuse they counted all US armed forces in in Iraq for what they are – ISIS reserves, plus more than half of SDF.

Nothing new. ”fight against isis” is often cited as reason of US presence, especially in Syria. The fact that isis is long broken (mainly by Iran, Russia…) doesn’t bother them.

So when Dumb said that ISIS was destroyed… he LIED….???
Noooooo, that cant be true!

The US and nato has done enough damage already. The Iraqi gov’t need to put in place an agreement with Syria and Iran because they are all under the same cosh. Only then will both Iraqis and Syrians have a peaceful life.

The Joint Operations Command is being too polite. The USadmin are lying as usual and expecting the Iraqis to believe it. I cannot see this situation going on for much longer. US forces are just hanging around, waiting for plan B.