Iran’s Arak heavy water nuclear reactor will resume its previous activities from July 7 if the other signatories under the 2015 Nuclear deal fail to uphold their part, the country’s President Hassan Rouhani said on July 3.

“But from July 7 onward with the Arak reactor, if you don’t operate [according to] the programme and timeframe of all the commitments you’ve given us, we will return the Arak reactor to its previous condition,” Rouhani said. “Meaning the condition that you say is dangerous and can produce plutonium.”

“We will return to that unless you take action regarding all your commitments regarding Arak.”

The president also revealed that Iran’s enrichment level would no longer be 3.67% and would be increased. 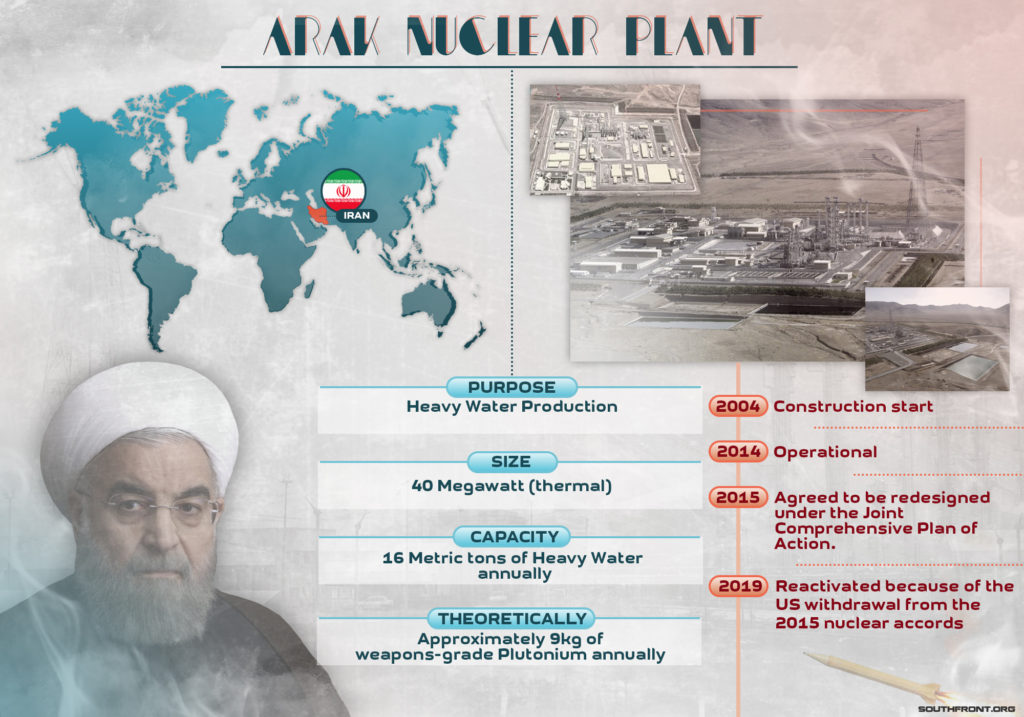 A heavy water cooling reactor uses natural uranium or uranium with a low level of enrichment in isotope Uranium 235. This kind of reactor produces plutonium 239 (the interesting isotope here), of course, among hundreds of other isotopes, but that is not its primary scope and is NOT efficient in this matter. In this type of reactor, plutonium 239 is a residue and extracting it from the fission products would be rather expensive. If you want to produce weapon grade plutonium, you need either a fast breeder reactor (military usable), who uses enriched Uranium (at least 20% of isotope Uranium 235), a graphite moderated reactor (can be civil or military) or either a light water moderated reactor (mostly civil reactors). Any of these would make more plutonium than a heavy water reactor.

Is heavy water the moderator in this reaction, or the by product (Absorbing excess neutrons)?

Heavy water is a moderator, it reduces the energy of neutrons (slows them down) and makes them usable in this type of reactor, where U235 is scarce. Yes, products of the reaction are, unavoidable, Pu 239 (along with Pu 240) and also isotopes of Th, but like @chrischuba:disqus said, the capability to extract it from the fission residue is way beyond Iran’s capabilities and economical interest. If someone wants to make weapon grade plutonium, goes to another type of reactor.

It does produce weapons grade plutonium but you need the ability to reprocess the waste which is very challenging. This is a point that the liar Fred Fleitz conveniently leaves out; he was actually carrying on about the terrors of letting Iran have the re-designed plant that would produce a fraction of the plutonium that Arak would, ‘they would have enough to build a bomb every 4yrs’ (wow)

BTW how much plutonium do you need to produce one bomb, about 20kg? I agree with your point that the reactor is obviously not designed to produce bombs, only that it is theoretically possible with sophisticated waste reprocessing.

Critical mass for Plutonium 239 is around 10kg (which means it will start a self sustained nuclear reaction by itself). Probably 3kg are enough for the ones who know how to do it (keeping the neutrons inside and the assembly intact long enough to burn as much fuel as possible before explode).

Iran should learn from Pakistan and China and should never trust US and UK terrorists.

Iran should calm and strong this will give strength to Iran to withstand against strong blow of stream. US and UK don’t consider that in the rest of the world humans are living.

After looking at the applicable international and maritime law. And the circumstances involving the UK seizure of an Iranian tanker in international waters. My initial assessment is that the UK has declared war on Iran with the commencement of a naval blockade against Iran.

I would say that the UK has just fired the first shot in the start of a Jew world order war against Iran.

Jews had zero to do with this. This is a Gentile operation.

Iran should be smart to enrich U-238 until its at least 80-90% U-235. Nuclear weapons are the only highly effective deterrent to the US Ziocon War Empire. They’ve got the missiles, all they need now are the warheads. Learn from North Korea

US Military & the Israeli AF would NEVER allow Iran to enrich past even 10%! IDF/USAF preparing massive strikes against iranian nuclear facilities if need be to stop them from getting nukes

Iran can NEVER have a nuke!