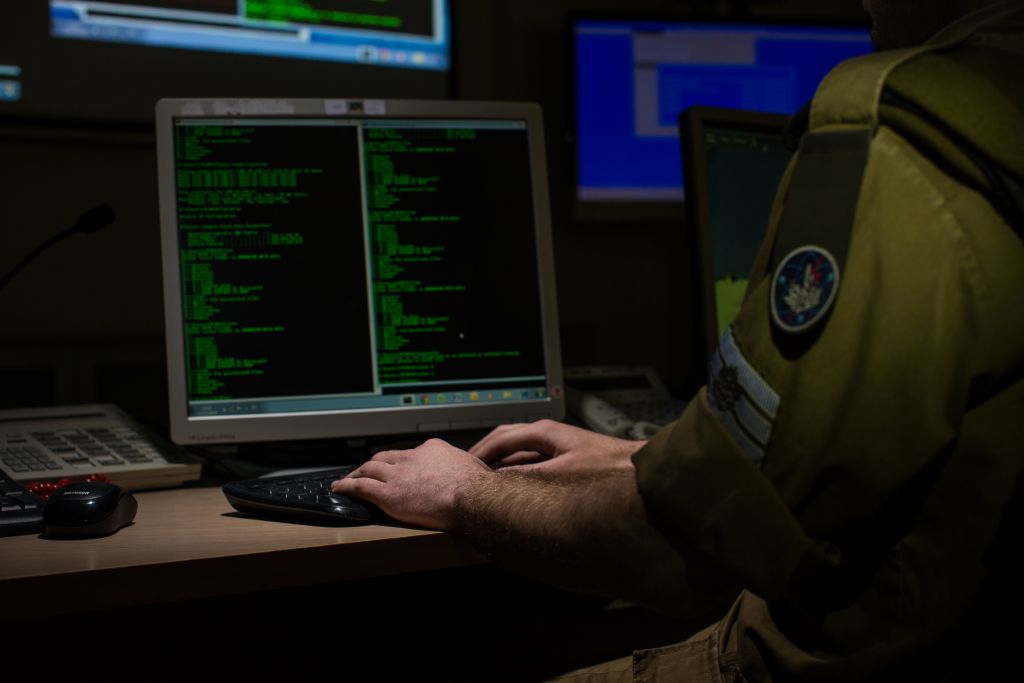 Illustrative. An IDF soldier from the C4I Corps types on a computer. (IDF Spokesperson’s Unit)

In a statement, the firm said that the hackers employed a wide array of fake email accounts to impersonate trusted parties, take over the targets’ accounts, steal information and use it to attack new targets.

The targets of the operation included a well-known former major general in the Israel military who served in a “highly sensitive position,” the current chairperson of one of Israel’s leading security think tanks, the former chairperson of a well-known Middle East research center, a senior executive in the Israeli defense industry and a former US ambassador to Israel.

For example, the email account of the unnamed major general was hacked and was used to target Tzipi Livni. The hackers asked the former minister enter her email password in a trojan file that had invited her to attend a conference abroad. Livni asked Check Point to investigate the suspicious emails it received after meeting with the general who denied sending them.

“The visible purpose of this operation appears to be… gaining access to victims’ inboxes, their personally identifiable information and their identity documents,” Check Point said.

Check Point said that the operation was likely carried out by an Iranian group called Phosphorus. The hacking group conducted similar cyber operations against Israeli officials in the past.

Check Point released its report just two days after media reports about an Iranian plot to attack Israelis in Turkey that was foiled by Israeli and Turkish security forces in May.

Check Point is an American-Israeli data collation and a spy company. I laugh my ass off when some morons say Zion “Cyber Security” forms are a thing. All of them are worse than FB, Google, etc.

Even some VPN companies are part of yanquis intell forms…and ofc Zion have free access to that, but for some time now Zion are making their way into data collations and spying.

Also, what was the point of this again? They never say if they achieve anything or not…most of the time it is a cover-up and downplays from Zion.

P.S. “reports about an Iranian plot to attack Israelis in Turkey that was foiled by Israeli and Turkish security forces in May.” Care to give more info about that? Turk-isis and Zion wouldn’t shut up if they find something, clowns.

SF clowns never can fuking use google. “IN ATTEMPT TO” right right…

A hacker group has broken into the Israeli electricity network, vowing to plunge the regime into darkness.

The group, which identifies itself as the “Moses Staff,” announced the attack on Wednesday.

It said it had targeted the Israel Electric Corporation, the largest supplier of electrical power in the occupied territories, as well as Dorad Energy Ltd., which serves customers throughout the territories, and technical solutions provider, Reali Technologies ltd.

“This is just the beginning; From now on, you will suffer irreparable damage,” the group said in a message.

“We will punish you. The goal is clear, definite, and precise. This is only a small part of our access to your power grid,” it added. “You will soon be in the dark,” the group concluded.

Earlier this year, the group struck Israeli closed-circuit television cameras in the occupied Palestinian territories and Rafael Advanced Defense Systems, an Israeli “defense technology” company. Back then, it posted a message regarding the cyberattack on its website, titled “We see with your eyes.”

Last November, Moses Staff said it had successfully conducted a massive cyberattack against the occupying regime, breaking into the servers of major companies, and adding that it was now in possession of comprehensive data that could be leaked.

According to Moses Staff’s website, the group has so far hacked scores of servers and hundreds of websites and compiled dozens terabytes of data.

In December 2020, Israel’s Ha’aretz newspaper claimed that a group of elite hackers that it introduced as Iranians had advanced as far as former Israeli prime minister Benjamin Netanyahu’s office and the regime’s major aerospace company.

The daily said the group that had emerged no earlier than in November that year, had attacked scores of Israeli targets, including at least 80 companies.

Yet, SF clowns don’t mention any of this…

P.S. “most of the time it is a cover-up and downplays from Zion.” That’s crazy huh, good job SF clowns.

Not sure if you know how this works. I work in IT. Many times, IT security know there are bad actors in the system. They allow them time to play and explore and we give them “phony meat” to chew on. They think they are hacking but they are being monitored and we launch counter attack at them, taking financial information, etc. Iran did not shut down Israeli grid. They left some messages on some sites. But they were ejected or left of their own volition. For a nation of 90 million taking on an enemy of less than 8 million, this is not much to write home about. Esp considering how much Israel messes with Iranian nuke plants and other institutions.

“Iran did not shut down Israeli grid. They left some messages on some sites.” – People can read the report, why are you repeating it?

Clown: “For a nation of 90 million taking on an enemy of less than 8 million, this is not much to write home about.” – But you were ejected or left of your own volition.

Claim down buddy, this is a small group in Iran, not Iran intelligence, or one of their main spy network. I can smell shit on you buddy.

“Esp considering how much Israel messes with Iranian nuke plants and other institutions.”

I see where you are coming from. I have this to tell you, don’t take a small group as a big deal “90m Iranians” LOL – you couldn’t google that could you Mr. IT guy? It is 86m people and Zion-stan has a population of 9.61m people – clown not 8m, and Iran doesn’t go around yelling about who they cooked. Trust me on that buddy, Zion hates to speak about their losses and Iran like Zion doesn’t use their own people so most of the time they don’t get the blame for it.

Also, Mossad needs MEK and CIA for their jobs in Iran buddy, do you have a clue how hard it is for Iran to cook Zion in Zion-stan… but they did more than what you can dream of.

Iranian intel are the Keystone Kops of the Middle East.