Iran is going to continue its actions to deter attempts of the US Navy to violate Iranian waters in the Persian Gulf, Deputy Chief of Iran’s Army for Coordination Rear Admiral Habibollah Sayyari stressed on December 24.

“The response of the Armed Forces and the Army of the Islamic Republic is that we will never allow them [US warships] to come near our territorial waters,” Sayyari said. “They cannot take any measure against us, because we are so prepared and have enough capabilities to stand up to such a publicity stunt.”

Sayyari expressed confidence that the US Navy does not have the courage to take any action against Iran. However, he added that any country is allowed to sail in international waters just as the Iranian Navy could sail in the high seas.

Earlier in December, the USS John C. Stennis returned to the region.

Iran is arming its large fleet of high speed missile boats with a new generation of missiles that are faster and difficult to evade, especially in a mass swarming attack.

The commander of the Islamic Revolution Guards Corps (IRGC)’s
Navy says new speedboats operated by the IRGC will be radar-evading and
equipped with new missiles.

Rear admiral Alireza Tangsiri made the remarks in an interview with
IRNA on Monday, noting that the IRGC’s Navy attaches great importance to
high speed and maneuverability in its missions.

“We are planning to equip the IRGC’s speedboats with radar-evading
stealth technology while increasing their speed in order to conduct
their missions,” the Iranian commander said, adding that “new missiles
moving at very high speed are being installed on the IRGC’s naval
vessels.” 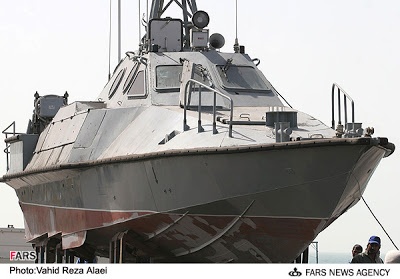