A senior commander of the Iranian Islamic Revolutionary Guard Corps (IRGC) was assassinated in Syria’s Deir Ezzor, a number of Syrian opposition sources reported on January 10.

The commander, Haj Hossein Dehghan Azad, was one of the leading IRGC officers in Deir Ezzor, according to several sources.

The Step News Agency, one of the sources which claimed that Haj Azad was assassinated, said the commander was killed when his convoy was targeted with an improvised explosive device.

The incident allegedly took place in the town of al-Bukamal in southern Deir Ezzor where the Iranian commander was based. According to the pro-opposition agency, two of Haj Azad’s personal guards were also killed in the attack. 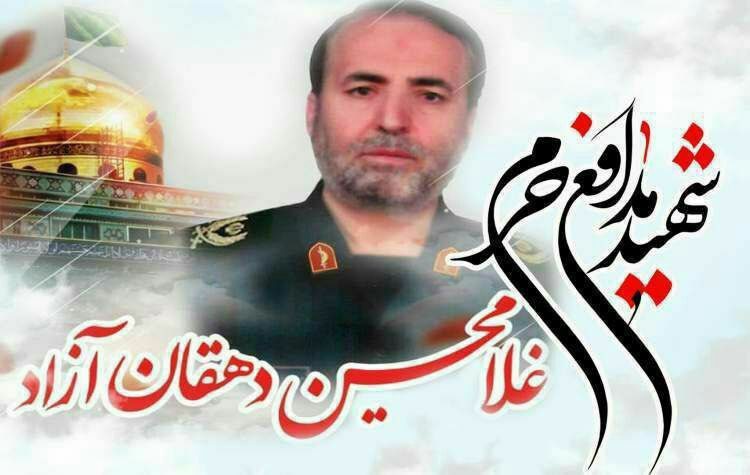 These claims were dismissed by official Iranian sources, which said Haj Azad died of natural causes. The 48-year old commander was reportedly suffering from a complicated medical condition.

The commander death fueled many rumors due to the high tension in Deir Ezzor. ISIS cells stepped up their attacks in the governorate’s southern and western countryside recently. There were also many reports of Israeli activities in the region.

Early on January 13, a series of Israeli strikes targeted a network of military positions between Deir Ezzor city and al-Bukamal. The rumors of Haj Azad assassination resurfaced after the large attack.

Doubtful claims by a dubious source. Expect more of these for the next few days as headchopper and Zionist desperation hits new peaks of panic.

I would believe the official Iran story rather than a fake news source. Iran proudly announces the death of any of her soldiers.

Just Me
Reply to  Lamumba

Iran has reported every casualty and the culture of Shia martyrdom gives its war dead great respect. This is fake news by the desperate headchoppers. However, this is real:

Great Khan
Reply to  Just Me

The Objective
Reply to  Great Khan

Iran always concealed any concealable losses. They claimed that the sabotage on nuclear facilities didn’t cause any damages and wasn’t done by sabotage agents. Later, when satellite proofs emerged, they changed the story and blamed Israel for the attack. There are MANY examples of the Iranian government lying to safe face. For example, they claimed in January 2020 that they killed tens of U.S troops in the missile attack, then it turned out not a singe soldier died. The lies and bluffs by Iranian leaders are too many to count actually. You would probably have claimed that the recent Israeli bombing of Iranian targets is fake news had video proofs not emerged.

Ewan
Reply to  The Objective

Not as much as Israel tries. Lost 100 Merkavas in 2006, claimed only 50 lost, then sent delegations to countries with large Jew populations to convince them that the European land theft colonial project is not yet in danger of extinction (which it clearly is) so that funding can continue.

The Objective
Reply to  Ewan

Oh fuck off. You think I’m speaking for Israel? Sunni Muslims have big problems with Iran and its network of terrorists infesting our communities. If I were to choose between Israel and Iran, I’d choose Israel ten times over. Because the problem Sunnis have with Israel is only limited to a small area. Iran on the other hand will not stop pushing for the overthrow of EVERY Sunni government to impose a Shiite system.

The Iranians often try to deceive the Sunnis that this effort is targeted only at America’s puppets who themselves suppress the Sunnis. But a closer look at Iran’s policies shows that this project targets the entire Muslim world. The Taliban government was not a U.S puppet government, but Iran never stopped trying to overthrow the Taliban long before the U.S invasion. The blown-up Soleimani played a critical role in the U.S invasion of Afghanistan. That makes his humiliated and ruthless assassination a befitting punishment from Allah.

The Objective
Reply to  Lamumba

Iran always concealed any concealable losses. They claimed that the sabotage on nuclear facilities didn’t cause any damages and wasn’t done by sabotage agents. Later, when satellite proofs emerged, they changed the story and blamed Israel for the attack. There are MANY examples of the Iranian government lying to safe face. For example, they claimed in January 2020 that they killed tens of U.S troops in the missile attack, then it turned out not a singe soldier died. The lies and bluffs by Iranian leaders are too many to count actually.

Hard to show proof when it is based on a utter fabrication. In Hindi is called jhoot par jhoot!

Wahhabis aren’t even Muslims, so can’t be labeled as ‘Sunnis’. I think that is already clear to everybody exept zios and Americans who actually works on division of ummah.

I understand you, but a lot of people don’t know much about Muslims and Wahhabism (not just Zion and American), and Far right Sunni become Wahhabi – I haven’t forgotten Sunnis that join ISIL in Iraq and Syria…Daesh, ISIL all other follow Wahhabi books before they make their own shit.

You could say after they join they are no longer Sunni and I agree with that, but they were Sunnis and still claim they are Sunni. I stop calling them Wahhabi Sunnis when other Sunni countries start calling Wahhabi terrorists what they are terrorists.

You continue to deny everything that appears on SF, be careful not to cause their bankruptcy.

SF use to post pro oposition sources…and we know how they lie and exaggerates… I remember the 2500 SAA soldiers killed after Turkish Drone strikes in Idlib…but suddenly SAA retake Saraqib and all village lost….I remember the 400 Russian PMC killed and days after the 5º corps ISIS hunter and Russians PMC launched an offensive and expelled ISIS from Mahkan close to Al Mayadin…

You’re always denying the obvious. I remember your bombastic posts during the N-K war, and how you claimed time and again that the Armenians were winning, despite overwhelming evidences to the contrary. This is just more of the usual denials from you.

NK army have killed 3000 AZ soldiers and 200 Syrian terrorist…NK army had under his control almost all NK province in west, north and east…Nk army didnt have drones to recorder how thousands of AZ soldiers were being killed…. NK army knew that just with air support and regular Armenian troops launched an offensive in Kalpa..AZ army would have failed to retake SHusha!..but Pashinyan is a traitor and Western agent while Putin had the interest to control Armenia government ( close to West) and he ended that war when he wanted!

“The 48-year old commander was reportedly suffering from a complicated medical condition” Then what took him to Syria if he had a medical condition? Denying your losses is another tactic of absolving yourself of the responsibility to retaliate.

Ewan
Reply to  The Objective

The Objective
Reply to  Ewan

When was that, and how many have you lost since then? … including your fallen heroes.

But no IRGC in Syria right? Assad claimed it. I think we have changed our policy, expect a more aggressive response now than in 2020.

OOOH , i’m sure they are terrified of IronZion the Calfornication diaper wearing armchair general. Why don’t you take a break from Hasbara Troll job and come back when you are 15