Tehran uses the ongoing crisis in order to boost ties with Qatar and to draw it into own sphere of influence.

The Iranian Mehr News Agency reported that Iran has allowed aircraft of Qatar Airways to cross the Iranian airspace:

Civil Aviation Organization of Iran has provided Qatar Airways with the license to cross the Iranian airspace.

The license became operation on Tuesday morning and Iran’s CAO announced that all possible capacities will be exploited to establish safe and orderly flow of international air traffic inside the region.

The decision for permit issuance was a result of coordination between international emergency coordination teams and ICAO Middle East (MID) Regional Office.

Majority of flights by airlines of Qatar head North Africa or Southern Europe and, prior to recent movements, Qatari aircrafts would first enter the airspace of Saudi Arabia and then Egypt. Now with imposition of air restrictions, flights from Qatar need to pass through Iran, Iraq and Jordan before entering North Africa.

That is te first step….
When the Saudi King doubles down , he will loose Qatar to Iran

you get the feeling a bigass war gonna breakout

Same here. I feel like a war is coming

A war to end daesh/Zionist/saudi reign of terror hopefully!!!

Here you see the actual situation…
Which are the nations who help Qatar ? 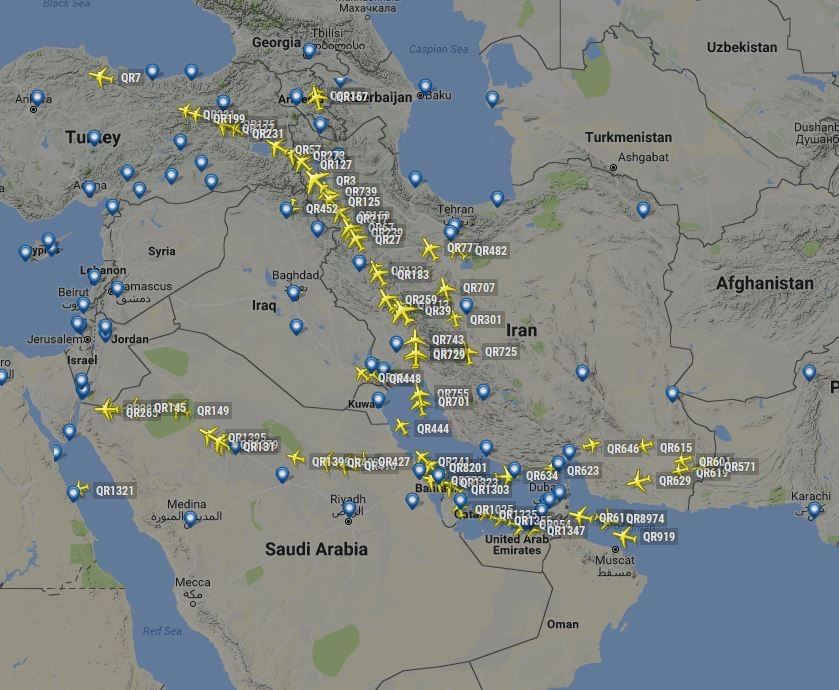 The empire is going to invade Qatar.

The empire is already in Qatar – Al Udied Air Base is largest US military base in ME – with 10,000 US personnel stationed there.

But Turkey is now manning up there as well. Whoops.

Yes you are right but now there is a rebellion as the empire begins to collapse. The empire wants to crush this rebellion to show no one can escape the racist supremacist Jewish empire and live.

what a bullshit:
1. you can’t enter Africa from Jordan without using egyptian airspace- take a look at the map
2. on the route to europe qatar air use the last years allways the iranian airspace directly to the turkish

and so it starts …. tick-tock exactly as planned.