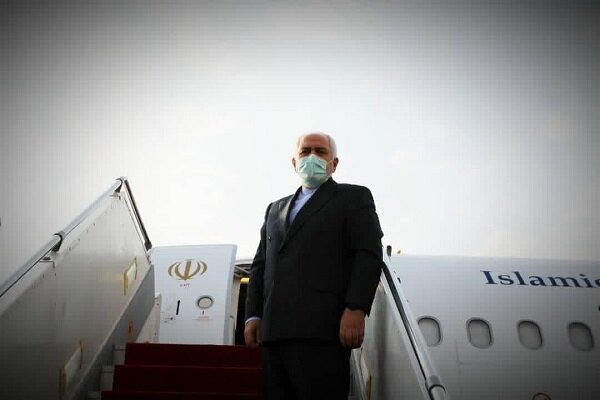 On May 12th, Iranian Foreign Minister Javad Zarif arrived in Damascus to meet and hold talks with Syrian authorities and exchange views on bilateral and regional issues, as well as to review the latest developments in Israel and its encroachment on Muslim shrines.

FM Zarif will also meet with the leaders of Palestinian groups living in Syria and discuss the latest developments in the region.

In a statement to journalist after his arrival, the Iranian Foreign Minister expressed happiness to be in Syria again and to meet the Syrian brothers, indicating that the current circumstances are very special, and it was planned to pay a visit to Syria on the eve of the elections there to hold talks with Syrian friends about this important event.

“Unfortunately, the criminal acts of the Zionist entity, which have escalated since the International al-Quds Day, and the unprecedented events that took place in al-Aqsa Mosque and the occupied territories and the bombing of Gaza, have created very deteriorating conditions in the region, and Syria, as one of the leading countries in the axis of resistance, has a very important role in this field,” Zarif said.

He added that the talks would touch on the support provided by the Islamic Republic of Iran for the Syrian Government and people, whether on the track of reconstruction or on the track of combating terrorism, in addition to the current situation in occupied Palestine.

For his part, Syrian Foreign Minister Faisal Mikdad emphasized that this visit is important and comes “at a crucial time that we are going through in both countries and the region, where the aggressive Western, American and Israeli policies are escalating … and the Palestinian people are now suffering as a result of the bloody practices of the Israeli entity.”

Minister Mikdad indicated that the situation is deteriorating in the framework of targeting this region by Western powers, adding:

”Targeting Syria and the Islamic Republic of Iran has been due to the stances of these two countries on the Palestinian issue and the support they provide to the Palestinian people’s struggle for liberation and building an independent state.”

In a recent telephone conversation Mikdad invited Zarif to travel to Damascus.

During the conversation, Faisal Mikdad presented a report on the internal situation in Syria, preparations for the presidential election and the country’s relations with its neighbors, and invited the Foreign Minister of the Islamic Republic of Iran to visit Syria, to which Zarif welcomed.

011101I’d like to share a revelation that I’ve had during my time here. It came to me when I tried to classify your species, and I realised that humans are not actually mammals. Every mammal on this planet instinctively develops a natural equilibrium with the surrounding environment; but you humans do not.00101101110 Instead you multiply, and multiply, until every resource is consumed. The only way for you to survive is to spread to another area. There is another organism on this planet that follows the same pattern… a v̲i̲r̲u̲s̲. 00101101Human beings, except for us, the elites, are a disease, a cancer on this planet, you are a plague, and we… are the cure.0110110

IRAN HAS ALWAYS STOOD WITH THE PALESTINIANS. THEY ARE PRINCIPLED PEOPLE

So why dont he visit Hamas HQ or Knesset. Damaskus hardly is a broken tail from a dog in this.

All fucking goyim must fucking hang.

Love Iranian Foreign Minister – Javad Zarif what a mad man he fuked my whole family and I watch him…I might sometimes sound mean to him but deep down I love that man as much as I loved Iron-Zion before he got hit in the head with full loud of ***. I might make a new video with BiBi please sub to my Only-fan don’t share the videos for free. #LoveIranForeignMinister #Pro-Terrorist #SatanIsNotBad #LoveMyHusbaneIron_Zion #BiBiDoBeLookingHotUnlikeThisApeIron-Zion #NGL

This comment board is the craziest shit I’ve seen in a while.

@Joe Biden Don’t worry, I know the human being and fish can coexist peacefully.